In addition to the Torah, many other historical artifacts belonging to the Hellenistic and Seljuq periods, including statues, stone rubbings, jewelry, and coins were recovered. 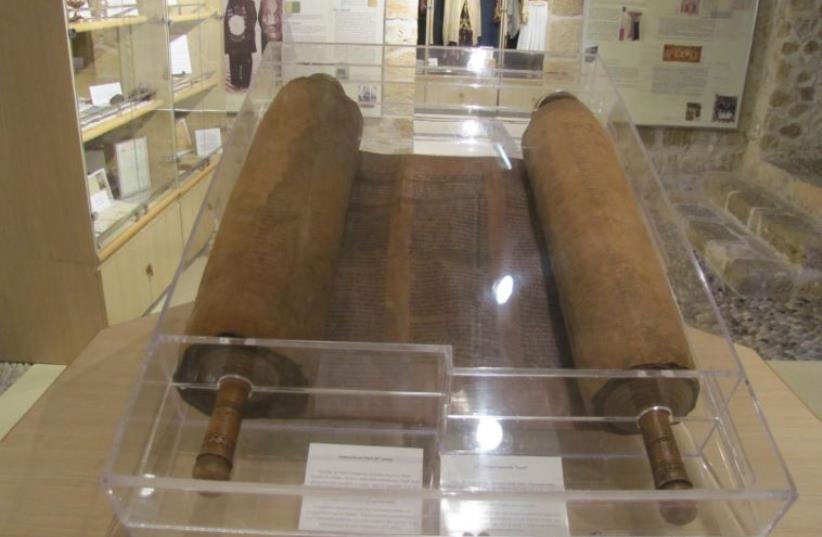 A 16th Century Sephardi Torah scroll at the museum
(photo credit: JUDITH SUDILOVSKY)
Advertisement
An ancient Torah estimated to be 1,500-years-old was seized from smugglers in Ayvalik, a western resort town in Turkey, the Anadolu news agency reported on Tuesday.In addition to the Torah, many other historical artifacts belonging to the Hellenistic and Seljuq dynasty periods, including statues, stone rubbings, jewelry, and 200 ancient bronze and silver coins were recovered.Turkish law enforcement detained two suspects and later released them on probation, and believe the smugglers brought the artifacts from Istanbul and Bingol, an eastern Turkish province. The Torah, inscribed on leather, was handed over with the other artifacts to the Balikesir Museum Directorship. So far, this has been a big week for the recovery of stolen Jewish antiquities. A 50-year-old Palestinian man was arrested on Tuesday after police seized hundreds of stolen rare antiquities from the Second Temple period stored in his West Bank home in the village of Huwara, near Nablus.

According to police, jewelry, pottery and hundreds of coins valued at tens of thousands of shekels were found following a joint investigation with the Archaeology Department of the Civil Administration in Judea and Samaria into illegal trafficking on the black market.