"Al-Quds Day is an annual day chosen by the late Ayatollah Khomeini to call for Israel to be destroyed.” 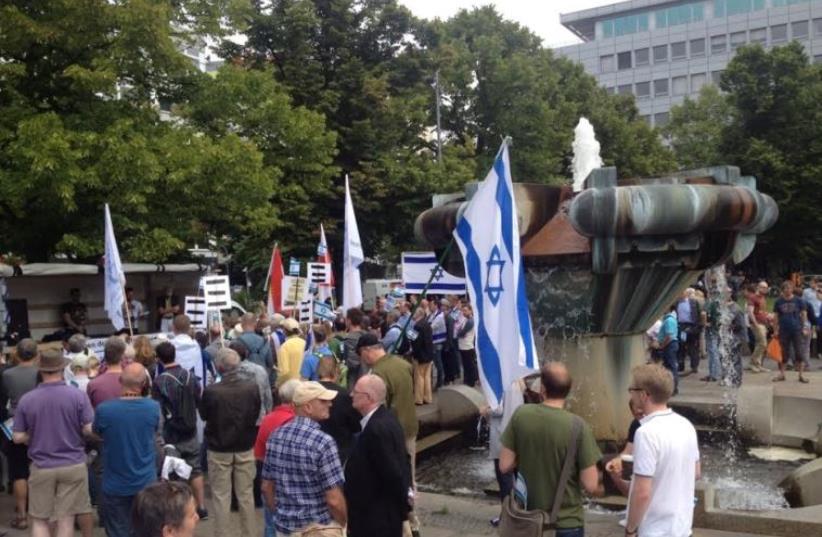 Pro-Israel rally against al-Quds day in Berlin, July 11, 2015.
(photo credit: CAROLA BASELER)
Advertisement
An online petition calling for a ban of the upcoming “Al-Quds Day” march in London had garnered over 15,000 signatures as of Thursday, due to concerns that the rally promotes antisemitism and terrorism.The annual event, which has previously attracted controversy due to the waving of flags of terrorist groups Hamas and Hezbollah, is scheduled to be held in the British capital on Sunday.Al-Quds Day was initiated by Iran in 1979 to express support for the Palestinians and opposition of Israel’s existence. It is held on the last Friday of the Muslim holy month of Ramadan.The petition was launched by the pro-Israel, anti-BDS British organization North West Friends of Israel, and addresses London Mayor Sadiq Khan.“Previous Al-Quds Day marches have seen displays of support for Hezbollah, an illegal, proscribed, antisemitic terrorist organization,” reads the petition. “This has caused great distress to the Jewish community. Al-Quds Day is an annual day chosen by the late Ayatollah Khomeini to call for Israel to be destroyed.”Speaking to The Jerusalem Post, Mark Gardner, spokesperson for the Communities Securities Trust, a charity focused on the security and protection of British Jews, said: “It’s deeply disturbing to see on an annual basis supporters of Hezbollah openly marching and demonstrating on the streets of London. It’s also very frustrating to see the way that the law is applied concerning the flying of Hezbollah flags and other displays of support for this antisemitic terrorist movement.”In response to the criticism, the march’s sponsor, the Islamic Human Rights Commission (IHRC), released a set of guidelines for participants and a press release.The guidelines, which provide suggestions with regards to talking to journalists, dealing with counter-protesters, and being vigilant, also include a section on the use of flags. It states that participants are “welcome to bring flags that show solidarity with the Palestinian cause,” with the added caveat that “flags of proscribed [illegal] organizations will not be allowed.”However, this is followed with the clarification that, “For example, you can bring a Hezbollah flag to show support for the political wing of Hezbollah. This is because the political wing of Hezbollah is not a proscribed organization.”This legal loophole is one that has long been contested by the Jewish community in the UK.In its press release, the IHRC dismissed accusations being leveled against it by Jewish organizations, saying, “IHRC believes that the objections raised exclusively by the pro-Israel lobby have no foundation and are designed simply to smear the event organizers and participants with the aim of concealing the ongoing crimes of the Israeli regime.”According to British online publication Jewish News, Khan intends to raise the Jewish community’s concerns regarding the march with London’s Metropolitan Police chief Cressida Dick, in a meeting scheduled to take place on Friday.A counter-protest organized by the Zionist Federation of Great Britain and Ireland (ZFUK) is also set to take place on Sunday, with support from the Jewish Leadership Council, the Board of Deputies of British Jews, and the World Jewish Congress among others.Speaking with reference to the recent spate of terrorist attacks in Manchester and London, ZFUK chairman Paul Charney said: “At times like this, it is more important than ever that we counter any support for extremism and terrorism, and stand together to say that there is no place for this expression of solidarity with terrorists on our streets.It is imperative that we come in large numbers to end this hate-fest and to show that London will not be divided by those whose sole aim is the promotion of extremism.”