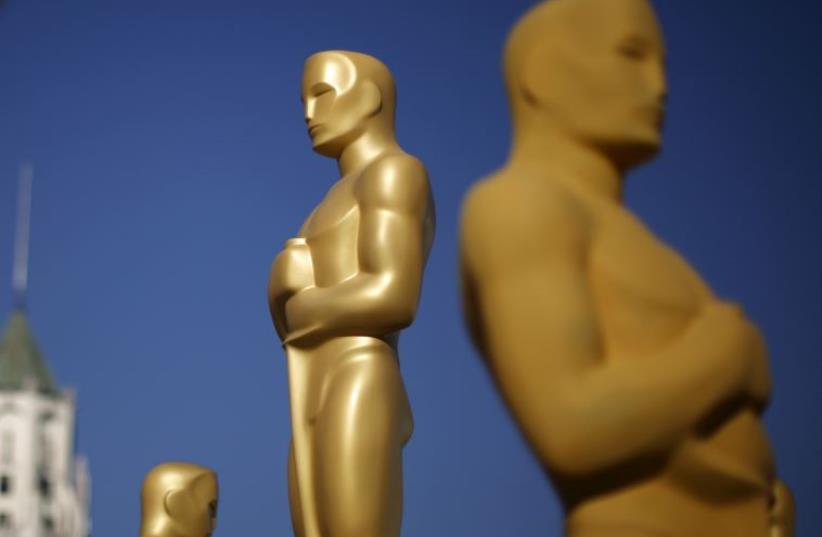 Oscar statues are painted outside the entrance to the Dolby Theatre
(photo credit: REUTERS)
Advertisement
It’s the biggest night of the year in Hollywood, so it’s not surprising that Jews are typically well-represented among the annual list of Oscar nominations. But this year, in the absence a major Jewish-themed film, the Jewiness of this year’s Oscars is of the quieter sort.As it happens, several Oscar-nominated films have unusually triumphant, behind-the-scenes Jewish stories worth celebrating. Below, we give you five of the best “secret” Jewish stories behind the 88th Academy Awards.1. How a Jewish director got a “Room” 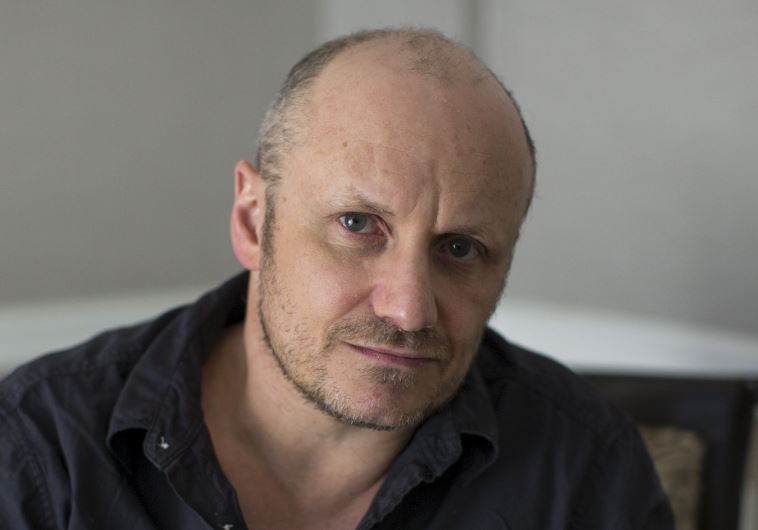 (Photo by: Reuters)Director Lenny Abrahamson — the son of a kosher butcher — was known in his native Ireland for indie films like “Adam and Paul” and “What Richard Did.”In 2011, when the Dubliner read Emma Donoghue’s novel, “Room” — about a woman and her young son being held captive in a single room — Abrahamson resolved to adapt the work for the screen.Abrahamson had the talent and the drive, but what he lacked was the international clout. So, in an attempt to beat out the big-name directors courting Donoghue, Abrahamson wrote her an impassioned letter outlining his cinematic vision.“I love this book, I feel I understand how it works, and I believe I have the skill and sensitivity to do it justice on film,” he wrote in the letter.When the pair met in person in Toronto, Donoghue was impressed with Abrahamson’s ideas. “Lenny completely understood the book and wasn’t scared off by the unusual aspects,” she told the Irish Examiner.The rest — including the film’s four Oscar nominations, among them Best Picture and Best Director — is history.This level of fame is relatively new to Abrahamson. He recently joked to the Jewish Journal that he is the third most famous Irish Jew of all time, behind former Israeli president Chaim Herzog (who grew up in Dublin) and the character Leopold Bloom in James Joyce’s “Ulysses.”2. “Son of Saul” star’s unlikely path to success(Photo by: Courtesy)Geza Rohrig, 48, grew up an orphan in Budapest, was adopted by a Jewish family and became religious at age 21 while studying at a yeshiva in Jerusalem. He later moved to New York City to study at the Jewish Theological Seminary and became a kindergarten teacher.Rohrig had written a great deal of poetry, including some works on the Holocaust, but he never imagined he would star in a much-lauded film on the topic.His life took a twist, again, when he met Hungarian director Laszlo Nemes at the New York home of a mutual friend. And even though he had very little acting experience, Rohrig accepted a role in Nemes’ first-ever film, portraying a member of the Sonderkommando, the prisoner unit tasked with escorting Jews to the gas chambers and disposing of their bodies.The massive success of “Son of Saul” was unexpected, to say the least. The film — which won the Golden Globe for best foreign film last month, won the Grand Prix at the Cannes Film Festival last year and is expected to win the Academy Award for Best Foreign Language Film — was partially funded by the Conference on Jewish Material Claims Against Germany, which compensates Holocaust survivors and typically funds more traditionally educational films.As for Rohrig, his performance has been almost unanimously praised. He recently told JTA that being kept away from his father’s funeral when he was four years old contributed to the emotions he brought to his character. “Staying home when he was being buried meant I couldn’t really grasp his death and it remained unresolved for years,” he said. “Well, I never experienced a concentration camp, but this movie is basically about someone who desperately wants to bury a loved one. For me it was my father.”3. A Jewish newspaper editor reveals a cover-up in the Catholic Church 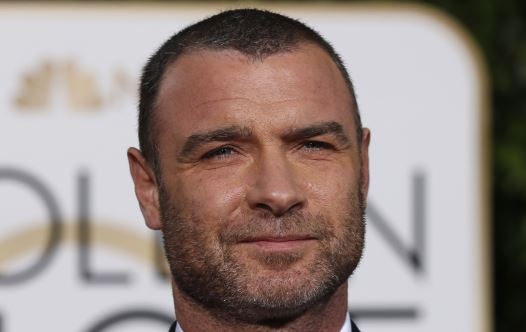 (Photo by: Reuters)In 2001, as the new editor of the Boston Globe, Marty Baron spearheaded the paper’s investigation into a long covered-up child sex abuse scandal in the Catholic Church. The case rattled the city and cost the church billions of dollars in settlements with victims.In “Spotlight,” a film about the ordeal, Baron — played by Jewish star Liev Schreiber — is described as “an unmarried man of the Jewish faith who hates baseball.”Baron’s status as the “outsider” of the Globe’s dogged investigation — marked by everything from his quiet demeanor to his non-Christian background — is an underlying theme of the film. Ultimately, it’s these precise qualities that are implicitly credited with helping him see the Catholic Church’s corruption — which had been swept under the rug for decades — with the fresh eyes needed to attack it.Schreiber’s portrayal has been called an “uncanny” reproduction of the real-life Marty Baron (now the executive editor of The Washington Post), whose questions in the Globe newsroom initially “embarrassed” some of the other reporters portrayed in the film. He quickly gained their respect by pushing them to go out of their comfort zones into an investigation that would roil the community.Josh Singer, who co-wrote the film with director Tom McCarthy, said earlier this month that people asked him why the movie chose to focus on Baron’s Jewishness. “I said, ‘Well, Boston focused on it,’” Singer said, according to the Jewish Journal.The film is nominated for six Oscars, including Best Picture, Best Director and Best Original Screenplay.Baron, who has now seen “Spotlight” eight times and applauds Schreiber’s performance, gave himself a rare compliment in an interview with Variety last year. “A Jewish superhero!” he joked. “First one ever!”4. The “making of a movie” doc that became a buzz-worthy movie of its ownAdam Benzine, a journalist covering the documentary world, was surprised to learn in 2010 that no one had made a film about the making of “Shoah,” Claude Lanzmann’s landmark, nine-hour documentary on the Holocaust.“Shoah,” which took the French-Jewish Lanzmann 12 years to make, consists primarily of interviews with survivors. It has become one of the most treasured films on the Holocaust, and Lanzmann — a former journalist and confidante of Jean Paul Sartre, who also had an affair with Simone de Beauvoir — was rocketed to international fame.But the filmmaker had grown deeply troubled during the decade-plus it took to make his masterpiece. Gathering the 300 hours of footage that was whittled down to the final “Shoah” cut “broke [Lanzmann] in a sense,” Benzine, who is not Jewish, told the Toronto Star.“Getting that close to so much darkness for so long left a permanent scar,” Benzine said.Benzine was determined that Lanzmann — and his process of making the beastly documentary — were subjects worthy of its own film. Lanzmann, however, was not keen on reliving the experience. He finally relented in 2013, and the subsequent 40-minute film — Benzine’s first —  is nominated for Best Documentary (Short Subject).“Making the film was total war against everything and everybody,” Lanzmann recalls in “Claude Lanzmann: Spectres of the Shoah.” “I was proud of what I had achieved, but it didn’t relieve me of my anguish.”Ironically, the original “Shoah,” which is far more popular in Europe than in the United States, was not nominated for any Academy Awards when it debuted in 1986 (its length and unorthodox style likely contributed to this). But there is a happy ending, of sorts: Lanzmann will attend the Oscars for the first time this year, and Benzine has reportedly arranged for him to meet with “Schindler’s List” director Steven Spielberg before the ceremony.5. Jennifer Jason Leigh’s fearsome comeback (Photo by: Reuters)On the surface, Jennifer Jason Leigh (born Jennifer Leigh Morrow) was riding high in early 2010: She had a baby with Jewish husband Noah Baumbach, as well as a role in his well-received film “Greenberg.” Only seven months later, she filed for divorce. Baumbach and Greta Gerwig, a younger actress who also starred in “Greenberg,” became a hot topic the next year.Leigh, who comes from a cinematic Jewish family (her father, Vic Morrow, was an actor; her mother, Barbara Turner, was a screenwriter), told the Guardian that she nearly gave up on acting after her split from Baumbach, which wasn’t finalized until 2013.“I feel like the door is closed, and I had made my peace with it and I was fine,” she said. “I just thought I had a great run and that’s that.”After a quiet period, Leigh broke back into a blockbuster with her role as Daisy Domergue in Quentin Tarantino’s “The Hateful Eight.” Her performance —  as a beaten prisoner who is sentenced to be hanged — has her in a prime position to win the Oscar for Best Supporting Actress. But if that doesn’t pan out, the consolation could be “Anomalisa,” an animated film in which she lent her voice, which is nominated for Best Animated Feature.“I would characterize it as: a hell of a year,” Leigh told the Guardian.Plus, the 2017 Academy Awards look bright, too: Leigh just finished filming the Rob Reiner-directed “LBJ,” in which she plays Lady Bird Johnson.