From aiding the hearing-impaired to a cellphone selfie stick and Paint Party Events, the Blumenthal Fund enables immigrants to do business in Israel. 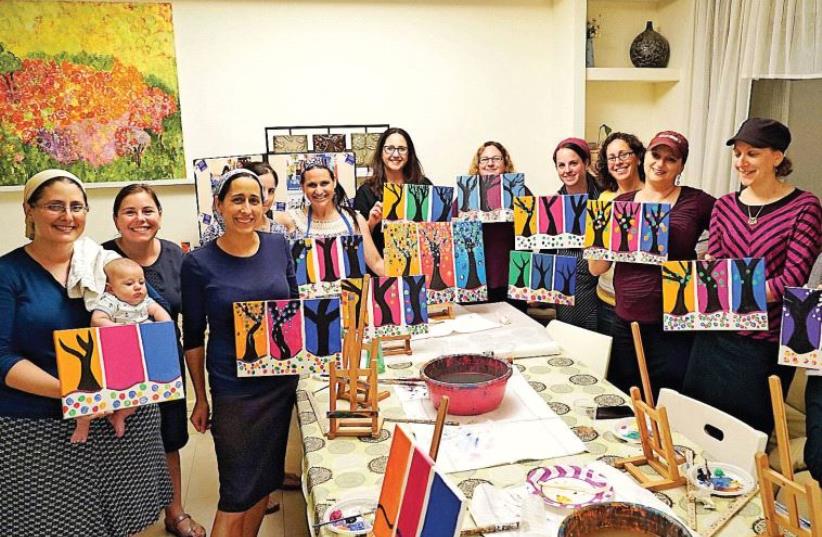 A Paint Party Events celebration
(photo credit: COURTESY NINA BRENNER)
Advertisement
Baltimore-born Eliyahu Khaver’s aliya story is quite remarkable. Khaver and his Torontonian wife, Esther, whom he married in 2012, made aliya with their baby son last year after a harrowing health scare. Khaver was diagnosed with severe aplastic anemia, and he required an urgent bone-marrow transplant. His doctors were not optimistic, but a rabbi advised him to “come to Israel, and you’ll be healthy.”A week later, on the eve of Succot, Eliyahu and Esther Khaver made aliya on a Nefesh B’Nefesh flight. He was immediately hospitalized and underwent a successful bone-marrow transplant from his brother. However, he contracted a highly invasive fungal infection that left him blind and deaf in one ear. Again defying his prognosis, he somehow beat the infection and began the road to recovery.Still, he found the “customer service” involved in his extensive hearing tests and shopping for a hearing aid in Israel an extremely negative experience, and he discovered that others felt the same way. 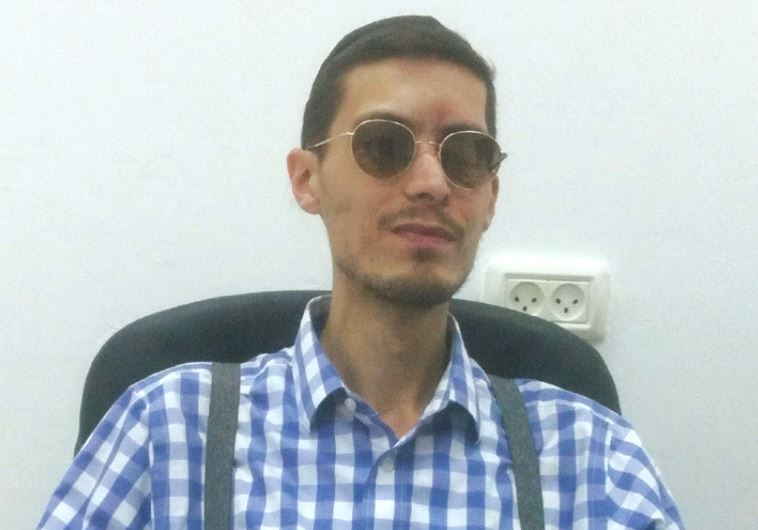 Eliyahu Khaver“This is what led me to open a hearing clinic, Machon Shmia Hadar, here in Jerusalem for those who expect more,” Khaver told The Jerusalem Post. “We don’t play games, we take care of our patients as family, whether it’s a test, service or repair. Our customers get plenty more than they expected, and we want to make this the new Israeli norm.”After many “trials and tribulations,” as he put it, the clinic recently opened its doors to the public. “Nothing makes me more satisfied than knowing my business is here to help people who would otherwise be neglected and denied the care and options that they rightfully deserve,” Khaver said. “We are the only hearing clinic that provides batteries free to all of our patients for at least three years but usually for the life of the product.”The clinic (www.hadarhearing.co.il.) offers hearing tests in multiple languages, including English, Hebrew and Yiddish, he noted.Khaver’s second son was born when he was in the hospital, and today he looks back at his aliya as nothing short of a miracle. “I see Israel as a land of opportunity, which brought me the gift of life by coming here,” he said. “Our aliya has been the greatest move of our lives... Thanks to God and making aliya, my children have a father, my wife has her husband and my parents and family have their son and brother. I am the walking dead man. Israel is the greatest place, and we really must thank Nefesh B’Nefesh for all their help during such an amazing, yet difficult time.”With the help of Nefesh B’Nefesh, Khaver received a grant from the Avram and Sharon Blumenthal Entrepreneurial Fund, which offers up to $10,000 to launch or expand a low-tech or small business in Israel.“We are grateful to Avram and Sharon Blumenthal for their vision and generosity. The Blumenthal Fund provides an impactful opportunity for passionate Zionists living in North America to partner with Nefesh B’Nefesh olim who have actualized their Zionist dream of living in Israel and contributing to the growth of Israel’s economy,” said Aaron Leibowitz, director of community engagement at Nefesh B’Nefesh. “The gift celebrates the vision and value of aliya and olim.”Yekutiel Sherman was only 21 when he invented StikBox. Sherman, who is now 23, made aliya as a lone soldier, and the rest of his family (his parents and four younger brothers) followed in his footsteps two years ago from London and now live in Jerusalem.“One day I was walking through the market and I saw a stand that was selling selfie sticks and phone cases,” said Sherman, who is now the CEO of the company. “I asked, ‘Why carry two things, when you can carry one?’ With StikBox, users get the functionality of both a protective phone case and a selfie stick all in one, which stays with them no matter where they go.”StikBox (www.stikbox.com) features a soft plastic handset with an aluminum back that can be extended into a selfie stick and connects to a mobile phone via Bluetooth. After a successful Kickstarter campaign launched late last year, it was exhibited most recently in Germany at a fair last month.David Sherman, Yekutiel’s father, said the family believes the market is huge, and they expect to start shipping its first units abroad very soon. 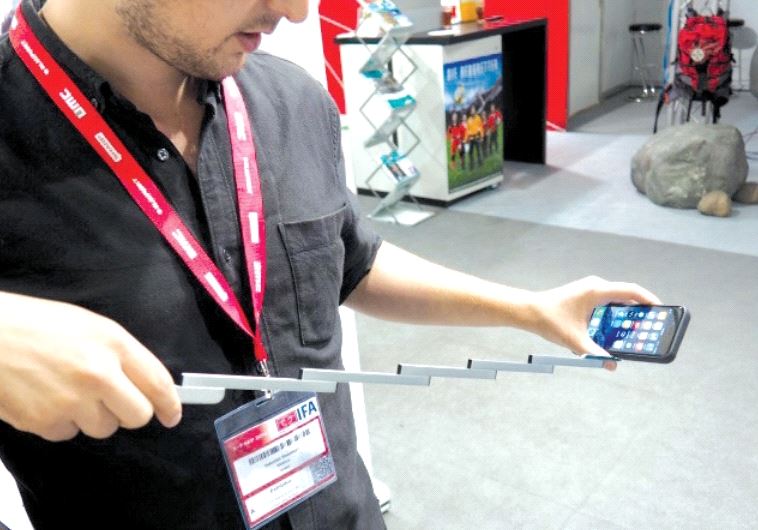 Yekutiel Sherman demonstrates how to use a StikBox with Yachin Yarchi, CEO of CSTM, who did the initial design“Our future plan is to expand the StikBox family to all major smartphone models,” he said. “We are very grateful to NBN and the Blumenthal Fund for their support and recognition.”Nina Brenner immigrated to Israel with her young son from Hollywood, Florida, in 2009 and began teaching art classes when she came up with a great idea: Paint parties!“I was struggling financially as a single mom when I made aliya,” Brenner said. “I started teaching art classes while finishing my MA degree [in gifted education] online. I discovered a fun way to teach both small and large groups how to paint anything to anyone (no matter the skill level). In other words, I could teach how to paint beautiful professional paintings to anyone, therefore boosting their confidence and self-esteem.”So what exactly is a paint party? “Seated at a table with a personal easel, each participant receives their own canvas, brush and paints. After voting on one painting, the fun begins. From the very first trace, we are there to gently guide everyone with every brush stroke, every color choice, and every technique. Food, music and wine are just some of the extras found at a paint party. We work in a step-­by-­step process, ensuring that everyone is always on track with the group. More often than not, the majority of the participants are inexperienced painters with little confidence. After just two hours, every party member leaves with an unexpected boost of self-assurance (as well as a beautiful, professional-looking painting which they created all by themselves). While they may not have believed it, each and every person is capable of producing beautiful artwork with just a little guidance.” 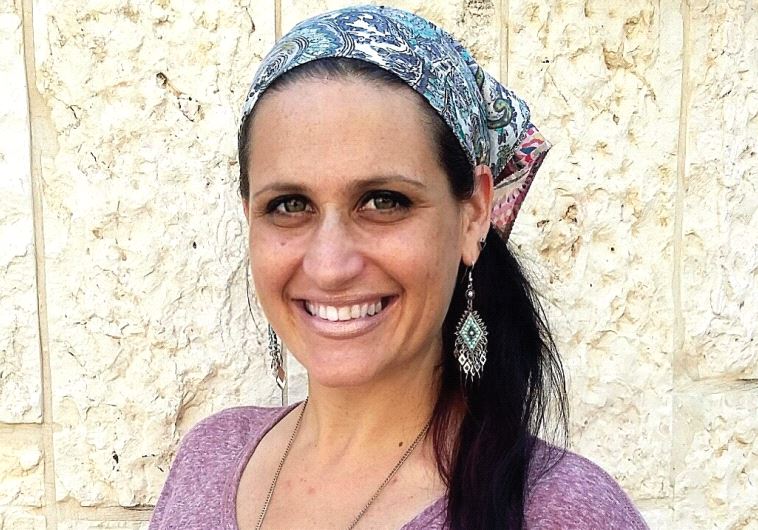 Nina BrennerBrenner, who lives in Rehovot with her two sons, aged 11 and 11 months, also received a grant from the Blumenthal Fund. Today Paint Party EventsTM (www.paintpartyevents.com), which was established in 2010, and is already a huge hit, can expand and develop.“Paint Party Events Israel brings the Paint Party to you! Not only are you having a party, but you will change the way you view art forever. This unique aspect makes Paint Party EventsTM a highly sought ­after activity year round,” she said. “Since our launch, more than 3,000 participants have painted with us in over 150 parties in 20 different cities throughout Israel.”Brenner and her professional team arrange parties for all occasions, from office and ladies’ nights out events to bar and bat mitzva and birthday celebrations. She counts some big names among her clients such as Taglit Mayanot Birthright, the Jeff Seidel Hebrew University International Student Program, Emunah B’Simcha, FXCM, Bridges for Peace, the Beit Sabah (Elazakri) Children’s Home in Netanya, Neve Yerushalayim, PTACH and Nefesh B’Nefesh.Asked about her dreams for the future, Brenner said: “We are working on something amazing! We want to bring the ‘Paint Party Studio’ to you, so we are working on designing the first ‘Paint Party Bus.’”Founded in 2002, Nefesh B’Nefesh, in cooperation with the Israeli government, The Jewish Agency for Israel, KKL and JNF-USA, is dedicated to revitalizing aliya from North America and the UK.