Gladys Jaramillo, told Florida’s Sun Sentinel Medina, his cousin, has had serious mental health problems since he sustained head injuries and was in a coma following a serious car accident. 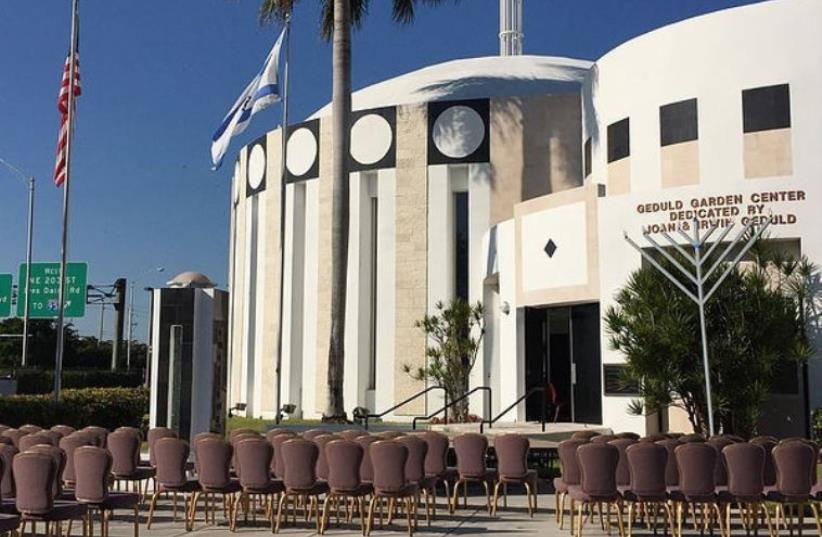 Aventura Turnberry Jewish Center, Florida
(photo credit: WWW.ATJC.ORG)
Advertisement
A Florida man accused of planning to bomb a Miami-area synagogue last week has had psychiatric problems since suffering head injuries in a car accident, his family said.James Gonzalo Medina, a 40-year-old convert to Islam from Hollywood, Florida, was arrested by the FBI last week, while carrying what he thought was a bomb to the Aventura Turnberry Jewish Center in a suburb of Miami. He is being held at the Federal Detention Center in Miami without bail; a bail hearing scheduled for Thursday was postponed to Tuesday after his court-appointed lawyer said he needs more time to prepare.Gladys Jaramillo, told Florida’s Sun Sentinel Medina, his cousin, has had serious mental health problems since he sustained head injuries and was in a coma following a serious car accident in South Florida some years ago.“He used to be a normal person but he had a big accident, and we thought he was going to die,” said Jaramillo, who said she is a teacher and lives in the Bronx. “He has had mental problems since he got in that accident.”According to prosecutors, Medina initially planned to attack the 800-member Conservative synagogue and its school with assault rifles on Yom Kippur and was hoping to inspire other Muslims to commit terrorist attacks. He told the FBI informant, “Jewish people are the ones causing the world’s wars and conflicts.”According to the Sun Sentinel, Medina was recorded telling an FBI informant he was prepared to kill innocent women and children. He also allegedly made several videos before the planned attack on the synagogue, including one in which he said goodbye to his family.“I am a Muslim and I don’t like what is going on in this world. I’m going to handle business here in America. Aventura, watch your back. ISIS is in the house,” agents reported he said in one of the videos.Jaramillo said she does not know exactly what her cousin’s diagnosis is, but that he is supposed to take some sort of medication.In recent years, Medina, who was born in New York, has had a hard time distinguishing fantasy from reality, Jaramillo said, according to the Sun Sentinel. For example, he once phoned her saying he was at Disney World with the celebrity Jennifer Lopez.“He’s not a bad person, he’s not a criminal,” Jaramillo said. “I don’t think he ever got the psychiatric help he needs.”Medina has an arrest record in Florida, including a misdemeanor domestic violence charges that were dismissed after a mental health expert determined he was incompetent to assist in his defense, the Sun Sentinel reported, citing state court records.The Sun Sentinel was unable to access the details of Medina’s diagnosis.The imam of the Islamic Center of Greater Miami mosque in Miami Gardens told the Sun Sentinel that Medina, who claimed to have volunteered there, was not a member of the mosque, but had prayed there a “few times” about three or four years ago. The imam said he had not seen Medina for two years.“For sure, he has many, many problems, I saw that,” the imam said. “He was not stable. Sometimes, he seemed like he was using drugs or alcohol.”