Activists protest in Germany against neo-Nazi vigil for Hitler ally

Many anti-fascist protesters said the vigil in Germany should have been barred.

By REUTERS
AUGUST 19, 2017 17:12
Far-right activists demonstrate to commemorate the suicide of Germany's former Deputy Fuehrer Rudolph Hess 30 years ago, in Berlin, Germany August 19, 2017
(photo credit: REUTERS)
Advertisement
BERLIN - Anti-fascist activists gathered in the Berlin suburb of Spandau on Saturday to protest against a vigil by about 250 neo-Nazis commemorating the 30th anniversary of the death of Nazi convict Rudolf Hess.The neo-Nazis planned a march from the suburb's station to the former Spandau Prison where Hess, an early ally of Germany's wartime dictator Adolf Hitler, served out the life sentence he was handed down at the post-war Nuremberg war crimes trials.Far-right activists held up banners reading "I regret nothing" and hoisted the red, white and black flag of Hitler's Third Reich as about 1,000 police looked on.Neo-Nazis commemorate the 1987 prison suicide of Hitler's one-time deputy every year, but this gathering has drawn more attention after a far-right march in Charlottesville, Virginia this month that led to the death of a young woman and drew international criticism.Many anti-fascist protesters said the vigil in Germany should have been barred. 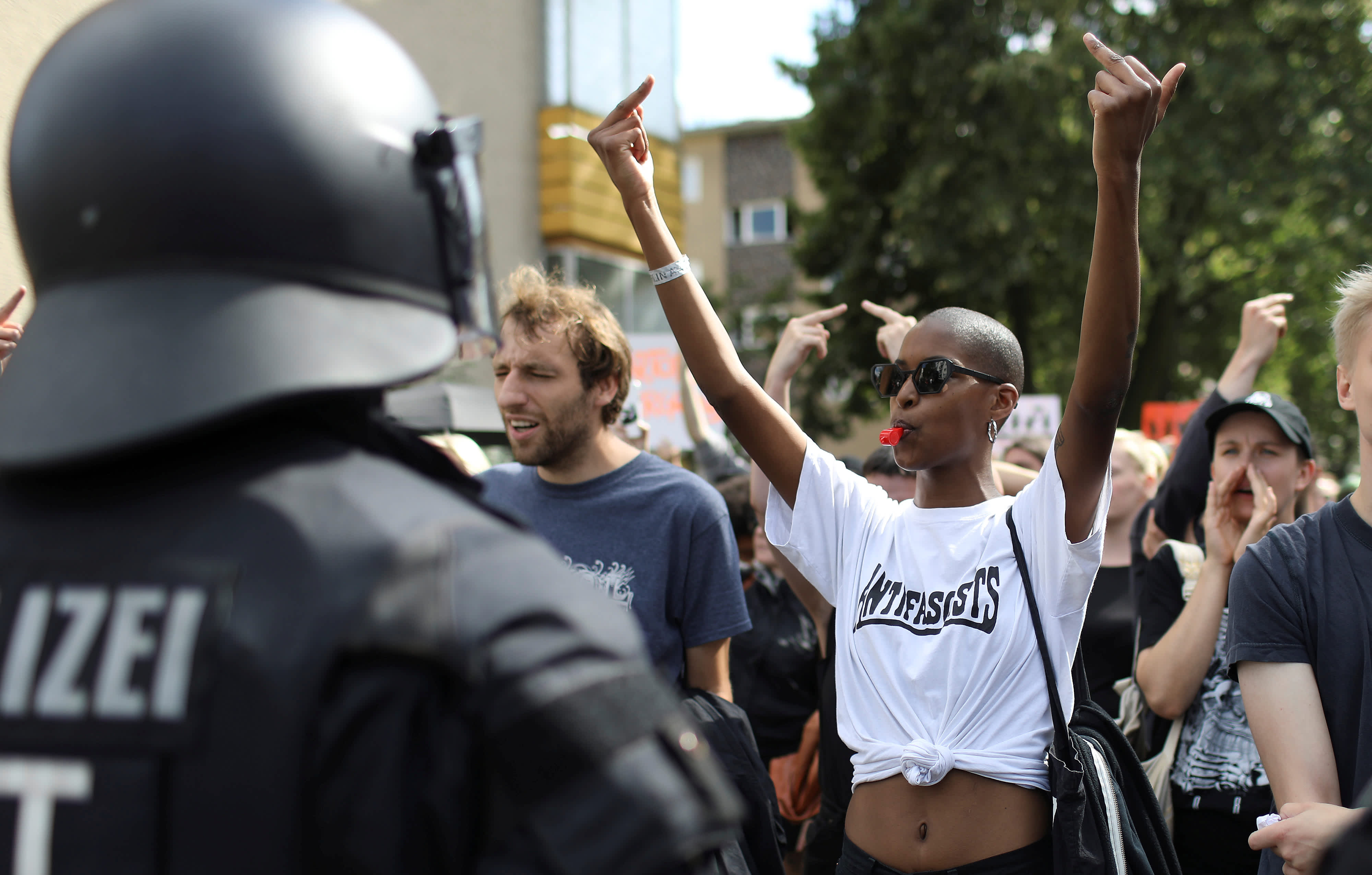 People protest against a far-right activist demonstration commemorating the suicide of Germany's former Deputy Furher Rudolf Hess 30 years ago, in Berlin, Germany, August 19, 2017. (Reuters)"It's appalling that in the year 2017, Nazis can openly go on the streets for this deputy of Hitler," said Gerhard Sattler, a protester. "This is impossible. The whole of German society must stand up against this."The crimes of the wartime regime are a matter of great sensitivity in Germany, where symbols of the Nazi regime, such as the swastika flag, are banned and where education about the dangers of totalitarianism and racial politics are a staple of the school curriculum.But Berlin's senator for interior affairs said banning this gathering would have been impossible to reconcile with the political freedoms of a democracy."I would have been delighted with a ban," said interior affairs senator Andreas Geisel. "But we looked very closely at the matter and concluded that unfortunately arseholes also get to benefit from democratic freedoms."Hess, who was the last war criminal in Spandau Prison when he died aged 93, was appointed Hitler's deputy when the Nazis came to power in 1933, a position he retained until 1941, when he flew solo to Britain, believing Hitler wanted him to negotiate a peace between the two warring sides.He spent the rest of the war in prison in Britain before being convicted of crimes against the peace at the Nuremberg military tribunal.