ADL antisemitism survey: 19% say Jews 'talk too much' about the Holocaust

The survey, entitled the "Survey of American Attitudes Toward Jews," was published on Wednesday and revealed that, in a time of antisemitic violence, negative stereotypes about Jews persist in the US 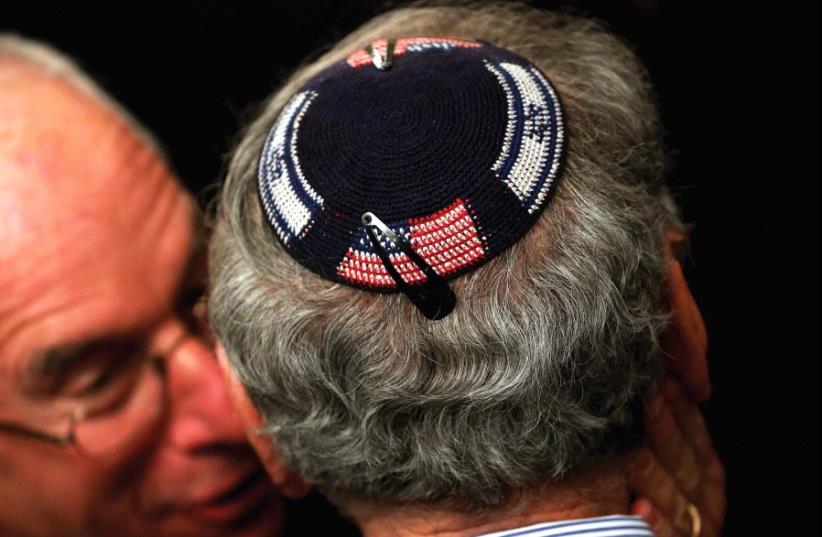 CONTENTIOUS TIMES in America are bringing out antisemitism.
(photo credit: REUTERS)
Advertisement
The Anti-Defamation League's (ADL) latest survey on antisemitism in the United States found that almost a fifth of Americans (nearly 19%) believe that “Jews still talk too much about what happened to them in the Holocaust." Additionally, it found that almost a fourth of Americans (24%) agree with the statement “Jews are more loyal to Israel than to America.”
The survey also investigated attitudes toward Israel and found that 14% believe Israel "behaves as badly as the Nazis" and 16% agree that Israel's “record on human rights is worse than most other countries.” According to the International Holocaust Remembrance Alliance's (IHRA) definition of antisemitism, which has been adopted by counties around the world, certain forms of anti-Israel sentiments can be considered antisemitic.
“We know that when antisemitic attitudes are expressed in public discourse without condemnation, especially from our leaders, it gives a green light to those on the fringe to keep spouting it – and acting on it,” ADL CEO Jonathan A. Greenblatt said in a statement. “That’s why every person has a responsibility to call out hate and antisemitism whenever it arises.”
The survey, entitled the "Survey of American Attitudes Toward Jews," was published on Wednesday and reveals that, in a time of antisemitic violence, negative stereotypes about Jews persist in the United States.
"In recent times, we’ve been horrified by an uptick in antisemitic violence. Our research finds that this uptick is being caused not by a change in attitudes among most Americans,” said Greenblatt. “Rather, more of the millions of Americans holding antisemitic views are feeling emboldened to act on their hate.”
Stereotypes about the Jews' role in business and finance are still held as beliefs in the US, according to the survey. The ADL found that 15% thought that Jews have too much power in the business world and that there are "10% agreeing with the statement 'Jews are more willing than others to use shady practices to get what they want.'” Additionally, 31% said that Jewish employers "go out of their way to hire other Jews" and 17% said that “the movie and television industries are pretty much run by Jews.”
The survey also found that more than a quarter (27%) believe the blood libel that the Jews killed Jesus Christ.
Despite the largely negative responses, many had positive feelings towards Jews. "79% of Americans believe that 'Jews place a strong emphasis on the importance of family life' and two-thirds 66% believe that 'Jews have contributed much to the cultural life of America,'” according to the ADL's press release.The ADL has conducted this survey since 1964 and used 11 questions to measure the prevalence of anti-Jewish attitudes in the US.