The ADL condemned the Rototom Sunsplash festival's decision to cancel reggae artist Matisyahu's performance after he was asked to sign a statement on his political views of the Palestinian state. 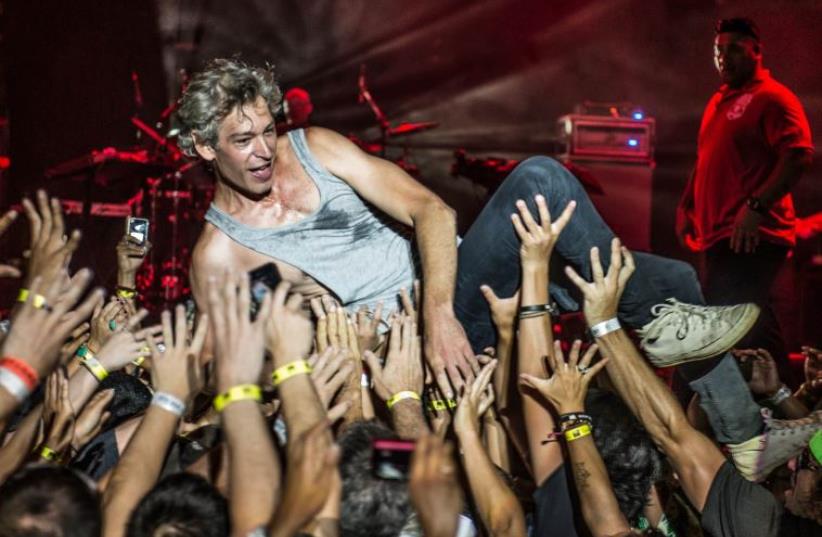 Matisyahu performing live at the Republik Music Festival in Honolulu, Hawaii. June 8, 2014
(photo credit: PETER CHIAPPERINO)
Advertisement
The Anti-Defamation League (ADL) condemned the Rototom Sunsplash reggae festival in Spain on Tuesday, calling their cancellation of American-Jewish artist Matisyahu's performance "a clear case of anti-Semitic discrimination." "Was a Jewish musician singled out, based on his religion, to undergo a political litmus test?” said Jonathan A. Greenblatt, ADL National Director. “Was he then denied the opportunity to perform for reasons completely unrelated to his musical talents? This appears to be a clear case of anti-Semitic discrimination - which is illegal in Spain - and we expect Spain to uphold its non-discrimination laws.”
Spain branch of BDS to Jpost : Matisyahu justified Israeli crimes
According to the Spanish daily El Pais, The Rototom organization conceded to pressures from the BDS movement, ultimately cancelling the performance after they issued Matisyahu an ultimatum to sign a statement supporting a Palestinian state, which he refused to do.“A local BDS group pushed for the boycott of Matisyahu, and the festival’s action provides another example of a clearly anti-Semitic result from the BDS Movement,” added Greenblatt in response to the organizer's decision. Valencia has developed a strong BDS campaign and organizers have accused the Jewish artist of being a "Zionist" who supports the practice of "apartheid and ethnic cleansing."ADL has reached out to Javier Moliner Gargallo, President of the County Council of Castellón, which had provided financial support to the reggae festival, and requested that Mr. Moliner insist that the festival reverse its discriminatory decision or have its financial support revoked. Matisyahu spoke out on his Facebook page on Monday, in response to the cancellation of his performance, "The festival kept insisting that I clarify my personal views; which felt like clear pressure to agree with the BDS political agenda," he wrote."The festival organizers contacted me because they were getting pressure from the BDS movement. They wanted me to write a letter, or make a video, stating my positions on Zionism and the Israeli-Palestinian conflict to pacify the BDS people.""Honestly it was appalling and offensive, that as the one publicly Jewish-American artist scheduled for the festival they were trying to coerce me into political statements," he added.  Matisyahu wrote that his music "speaks for itself, and I do not insert politics into my music. Music has the power to transcend the intellect, ideas, and politics, and it can unite people in the process."   Last summer, ADL urged the Spanish government to take action on anti-Semitic incitement emanating from various anti-Israel demonstrations.The League’s recent poll in 100 countries found that 29 percent of those surveyed in Spain harbor anti-Semitic attitudes.