Carmen Bretin Lindemann announced Thursday that she was bowing out of the mayoral race of the northeastern village of Garupa. 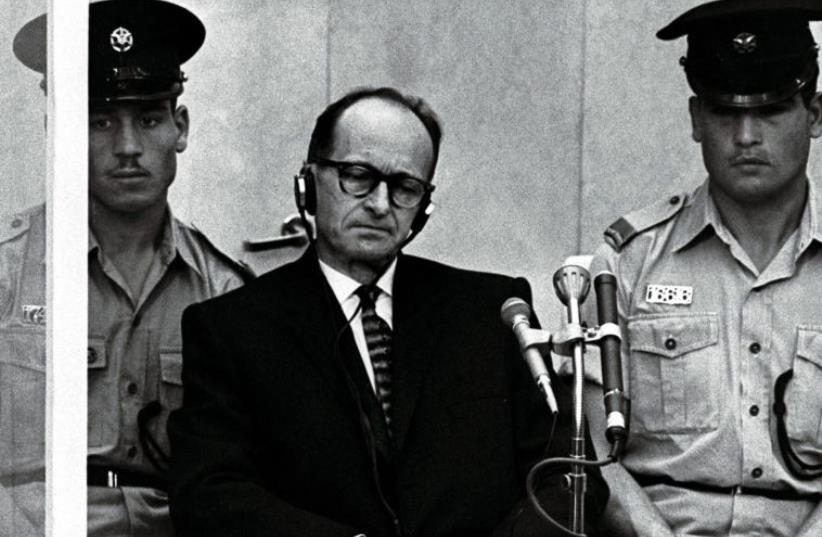 Israeli police flank Adolf Eichmann, the Nazi SS colonel who headed the Gestapo's Jewish Section and was responsible for millions of Jews' deaths in Nazi concentration camps, as he stands trial inside a bulletproof booth in a Jerusalem court
(photo credit: REUTERS)
Advertisement
BUENOS AIRES - A daughter-in-law of Adolf Eichmann, the late Nazi war criminal who masterminded the near-annihilation of Hungarian Jewry, withdrew her mayoral candidacy in Argentina after defending his actions on television.Carmen Bretin Lindemann announced Thursday that she was bowing out of the mayoral race of the northeastern village of Garupa after receiving intense criticism for what she said about Eichmann during a television interview that was aired on Wednesday.“The history that you know is not the real one, the version that you know from movies and books is written by the Jews, and all the world accepts that history,” she said in the interview for the TN news channel.“He wasn’t a bad person, he obeyed orders and did not personally kill anyone,” she added, calling Eichmann “grandpa.”Bretin Lindemann ran as a representative of A New Alternative, a party led by presidential candidate Sergio Massa. But after the interview was aired, she was expelled from the party. In a statement she published on Thursday, she wrote: “In order to not hurt my fellow party members in the alliance my immediate resignation is necessary. I want to assure the public that I don’t and never did support the Nazis.”The Jewish political umbrella DAIA condemned Bretin Lindemann for “denying the extermination during the Shoah and vindication of Nazism” in a statement.The trial of Eichmann, who was executed in Israel in 1962 following his conviction of crimes against humanity, led the political theorist Hannah Arendt to write about what she termed “the banality of evil.” She argued Eichmann was an example of how normal individuals will, given the right circumstances, dispassionately carry out atrocities without recognizing them as such.But Gabriel Bach, a retired justice in the Israeli Supreme Court who acted as prosecutor in Eichmann’s trial, has disputed this assertion, describing Eichmann as an ideologically-motivated murderer of Jews who went to extreme lengths to kill as many of them as possible.