The Jewish community in Uzbekistan will receive protection, like other minorities, rabbi says even after the passing of the Uzbeki president. 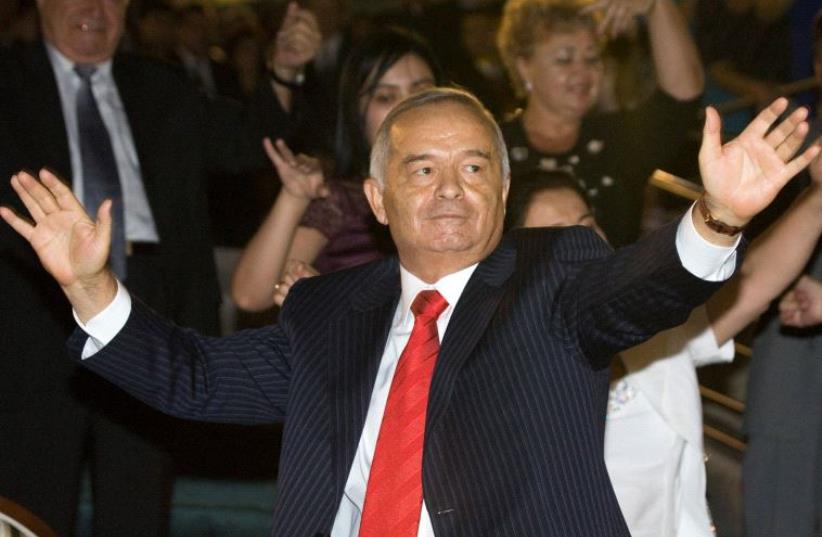 Uzbekistan's President Islam Karimov dances during Independence Day celebrations in Tashkent
(photo credit: REUTERS/SHAMIL ZHUMATOV)
Advertisement
Uzbekistan’s Jews are not worried for their future after the death of the country’s longtime president Islam Karimov, the country’s chief rabbi said.The Uzbek strongman, who had ruled his Central Asian Muslim nation with an iron fist before he died at the age of 78 last week, “prepared the country well and its security forces are drilled in a case where he would no longer be around to rule,” Rabbi Baruch Abramzaiov told JTA Sunday, a day after Karimov’s funeral in the city of Samarkand. The government has not named a successor.“The president had excellent relations with the Jewish community, in part because he went to school with many of its members and had many friends from its ranks, and this situation is expected to continue,” said Abramzaiov, a 45-year-old father of six who is based in Tashkent.On Sunday, President Reuven Rivlin sent a letter of condolence "to the people of Uzbekistant" to mourn Karimov's passing, sayig that "Israel stands beside the Uzbek nation at this difficult time." Rivlin added that "We in Israel are very pleased with the good relations between our two countries and the cooperation between our two nations in a number of areas. We look forward to continuing to expand and to further enhance the good relations with Uzbekistan in the future."He said he is the only rabbi and among very few spiritual leaders catering to the needs of a dwindling community of 13,000 Jews in a country that had 95,000 Jews in 1989.Under Karimov, there was “lack of space for free, independent media and the real threats to journalists who undertake this essential work,” as well as endemic corruption so bad that it impeded foreign investments, the US Department of State said in a 2015 report. The United Nations accused Karimov’s regime of “systemic torture” of dissidents.But Karimov, whose country of 30 million people borders with Afghanistan, said some of his controversial limitations on free speech were to keep out radical Islam. He also opposed perceived attempts to curb his country’s sovereignty by its powerful northern neighbor, Russia.“There are potential threats in the Islamic State and other radicals but Jews, as well as other minorities, receive government protection and will continue to get it,” Abramzaiov said.But, he added, there were also limitations imposed by the government on the community under Karimov. “The government does not allow the community to have more than one rabbi, they want there to be only one person licensed to serve as rabbi, and this is limiting.”His community of 8,000 congregants in Tashkent has assimilation and largely does not observe the Shabbat, he said. “This is hard to change with only one rabbi,” he added.According to the Euro-Asian Jewish Congress, approximately 3,000 of Uzbekistan’s Jews are Bukharian Jews – an ancient Jewish community of merchants that was first documented in the 12th century in what is now Uzbekistan. The area was an important milestone along the Silk Road. Some historians believe Jews lived in Uzbekistan as early as the 4th century. Others still believe they have lived there for 3,000 years.A devout and hardy group, Bukharian Jews have large communities in Israel, New York and Vienna. They also have distinct customs and costumes worn on Purim and Passover, as well as distinctive foods including Hamantash-like dumplings filled with fried onions and pumpkin.In ancient times, Bukharian Jews had customs borrowed from their Muslim neighbors, including the wearing of veils by women. They also spoke the Bukhori language — a mix of Persian, Tajik and Hebrew. It is now extinct.