As Europe and the US experience an uptick in antisemitic incidents targeting Jewish communities, Jewish groups call on the European Parliament to clearly define antisemitism. 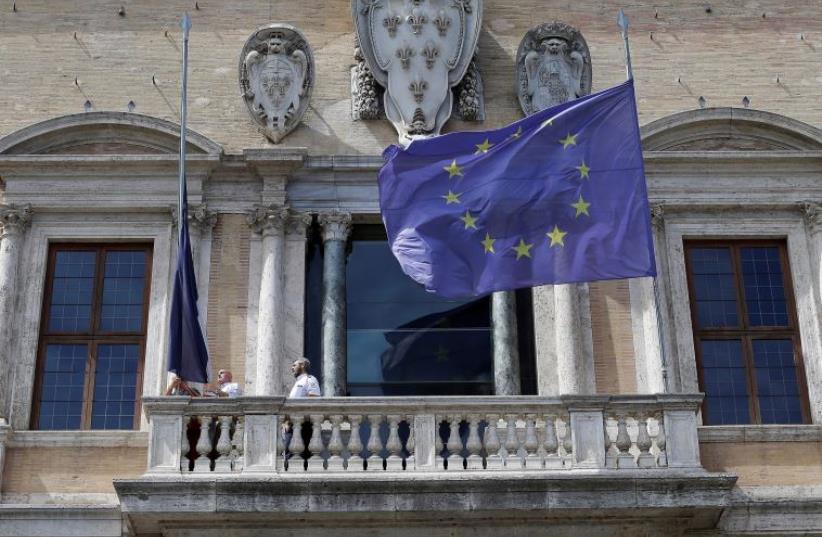 An European Union flag is lowered at half-mast in honor of the victims of the Bastille Day truck attack in Nice, outside the EU Parliament in Brussels, Belgium, July 15, 2016.
(photo credit: REUTERS)
Advertisement
Jewish groups have called on the European Parliament to support the adoption of the International Holocaust Remembrance Alliance definition of antisemitism when it is put to the vote on Thursday.“We fundamentally believe that the absence of accepted definitions of antisemitism in the legislation of some member states and indeed, the European Union itself, acts as a major obstacle in addressing the real security concerns of our communities and thereby preventing the efficient use of resources by governments in their primary role to protect their citizens,” wrote representatives of Jewish communities in EU member states, led by EJC President Dr. Moshe Kantor.The International Holocaust Remembrance Alliance (IHRA) formulated the definition last May amid concerns of rising antisemitism, in an effort to clamp down on discriminatory or prejudicial behavior that might fall between the cracks due to unclear or differing definitions of antisemitism.The IHRA definition adopted by the group’s 31 member countries reads: “Antisemitism is a certain perception of Jews, which may be expressed as hatred toward Jews. Rhetorical and physical manifestations of antisemitism are directed toward Jewish or non-Jewish individuals and/ or their property, toward Jewish community institutions and religious facilities.”The EJC letter notes that 24 EU states are members of the IHRA and therefore signatories to the IHRA definition.“We believe that the affirmation by the European Parliament and the support of all its political groupings of this clear, recognized and effective tool in fighting the scourge of antisemitism will send an important message to those in our communities concerned for their security and their fundamental rights in Europe and be a facilitator for the important measures required both at the legislative and the practical security level for all member states to tackle antisemitism,” the signatories wrote.But on Monday, the British University and College Union (UCU) voted to distance itself from the definition, claiming that it “conflates antisemitism with criticism of Israel and has been used to intimidate academics engaged in activities that are critical of the policies of the Israeli government but that are not antisemitic.”The UCU represents more than 110,000 academics, lecturers, trainers, instructors, researchers, managers, administrators, computer staff, librarians and postgraduates in universities, colleges, prisons, adult education and training organizations across the UK.Jewish leaders in the UK slammed the move, with Board of Deputies of British Jews president Jonathan Arkush describing the motion as “disgraceful.”He noted that the definition has the support of the British government, the Labour Party and the National Union of Students, among others, and thus found the decision “retrograde and deeply disappointing.”“Despite past form, it beggars belief that anyone in the UCU would want to dictate to Jews what constitutes antisemitic abuse against them,” he continued, in reference to similar motions made by the union in the past.“This resolution seeks to deny victims of antisemitic abuse the right to call it out for what it is – particularly when it is dressed up as extremist and dangerous demonization of Israel or when Jews are harassed or intimidated because of their connections with Israel,” he added. He urged the UCU to “confront this pernicious affront to common decency and stand with the victims of racist abuse, rather than the abusers.”In April, Austria became the third country to adopt the definition, after the UK and Israel.