Leaders stated that their organizations would continue to engage black communities despite the BLM platform, and expressed confidence that Jewish-black relations would weather the current storm. 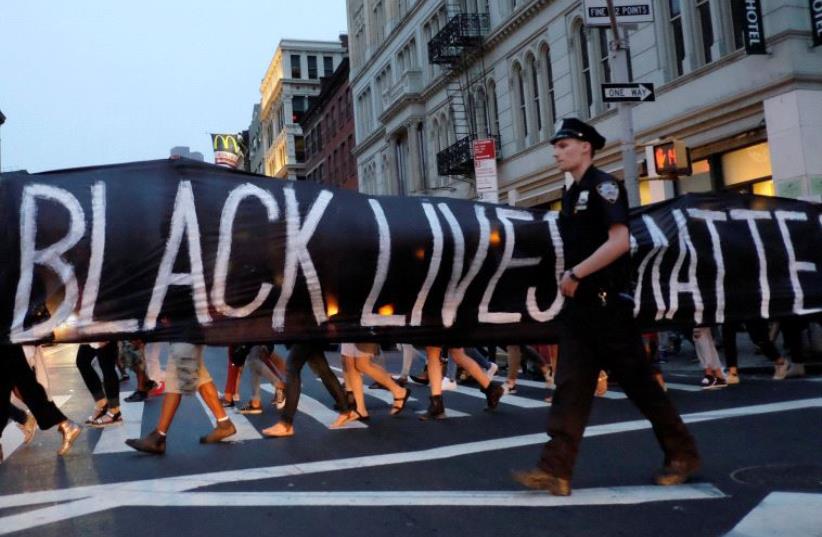 Black Lives Matter protest
(photo credit: REUTERS)
Advertisement
BOSTON – Admitting they were taken by surprise by the Black Lives Matter platform – which called Israel an “apartheid state” and accused the United States of complicity in Israel’s “genocide” against the Palestinians – American Jewish leaders expressed optimism this week in the resiliency of Jewish-black relations in the US.“We won’t allow a singular organizational statement to deter us from engaging in this important social justice issue: the relationship between young African American males and police safety and security,” Eric Fingerhut, president and CEO of Hillel International, told The Jerusalem Post on Wednesday.“We understand that black lives matter – not the organization, but the principle – is an important conversation that has to be pushed forward, and nothing will change that,” he said. “However, we cannot and will not allow anyone – using other issues as a cover – to introduce or reintroduce false and misleading information on our campuses or mobilize efforts to delegitimize Israel.”Fingerhut made his statements before addressing a group of some 30 young professional campus activists working for IACT (Inspired, Active, Committed, Transformed), a joint initiative of Hillel and the Combined Jewish Philanthropies of Boston that engages Jewish students on more than 30 campuses nationwide to go on Birthright programs and become more involved in Jewish and Israel-related issues.Some of the activists, who will be manning Birthright recruitment booths on campuses in September, expressed concerned about how to respond to potential criticism by students raised by the platform.“Obviously, we will have to monitor what particular organizational leaders are saying, and what the impact is on the conversation about Israel on campus,” said Fingerhut.CJP President Barry Shrage, who spoke to the IACT staff a day earlier, criticized a group of Jewish activists from an organization called IfNotNow, who picketed the Boston offices of the Jewish Community Relations Council demanding that it retract its recent statement criticizing the Black Lives Matter movement’s platform.“Those people did not read the entire verse from Pirkei Avot – ‘If I am not for myself, who is for me? And if I am only for myself, what am I? And if not now, when?’ It’s a Jewish instinct to create a balance, because you need that balance.It’s not only African-American children that you have to worry about, it’s our children too,” he said.Shrage defended a CJP statement released last week, similar to JCRC’s, which stated that the Black Lives Matters platform “goes far beyond BDS in its biased, false and dangerous narrative regarding the Israeli/ Palestinian conflict... we cannot march side by side with organizations that oppose the very existence of the Jewish state, who blame Israel – and only Israel – for 70 years of conflict, who distort the truth and who deny the Jewish people’s past, thereby endangering our children’s lives and our children’s future.”According to Shrage, “you have to speak strongly against the lies and distortions. We have a primary responsibility – if I am not for myself, who will be for me? “At the same time, we have to continue to find a way to show we are invested in the world. The American Jewish community is deeply committed – it votes 70 percent Democratic because it cares about the world, and it will probably vote 90 percent Democratic in November because we care about the world.”Both Shrage and Fingerhut adamantly stated that their organizations would continue to engage black communities despite the Black Lives Matters platform, and expressed confidence that Jewish-black relations would weather the current storm.