Analysis: A sense of déjà vu in the French left-wing primaries

Currently, most pundits predict Hamon will not make it to the second presidential election campaign. 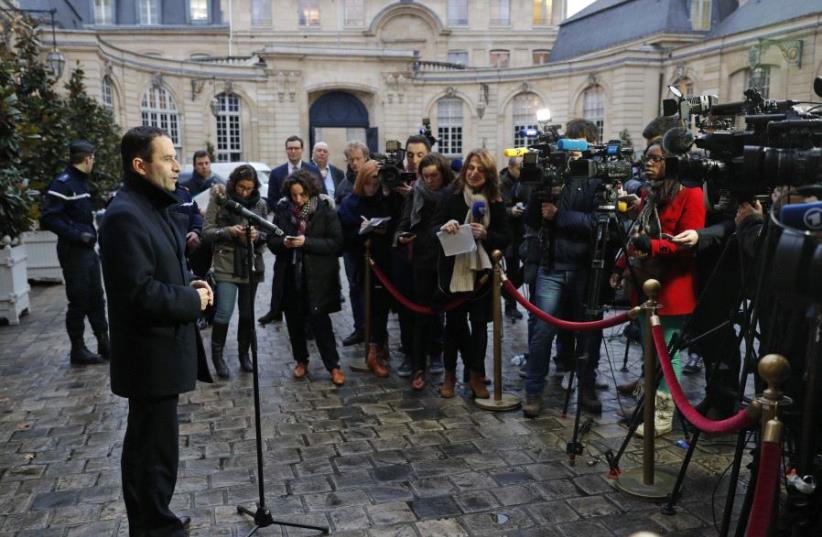 Benoit Hamon (L), French Socialist party's 2017 presidential candidate, talks to journalists as he leaves after a meeting with the French Prime Minister at the Hotel Matignon in Paris, France
(photo credit: REUTERS)
Advertisement
PARIS – Watching the results of the French left-wing primaries on Sunday night, many spectators felt a kind of dejavu; much like the Republican Party primaries just a few weeks ago, the Socialists have opted for the “hard-core’’ candidate.The victory of Socialist Benoit Hamon against his party-rival Manuel Valls reshuffles all political cards ahead of the presidential elections scheduled for late April, repositioning the party of President Francois Hollande at the very clear left. Henceforth, the party has no longer any ambitions of attracting center voters.Hamon has seduced his electorate with a promise of a “universal salary” of 750 euros to each citizen, regardless of his or her income or employment status.He also preaches for increasing taxes for the rich, increasing taxes on polluting factories and legalizing cannabis. All of these measures are obviously aimed at the middle class and at young people.They would hardly appeal to the center or right-wing voters.And so, Hamon’s agenda is focused on economics and society, with little to no room at all for foreign policy. He is well aware of the fact that the ongoing economic crisis will determine the results of the presidential elections. Foreign affairs are certainly not at the focus of Hamon’s agenda. In the few times he referred to such issues, he espoused left to extremeleft positions on international issues.Many French Jews were disappointed by the left-camp’s primaries results; not so much by the victory of Benoit Hamon as by the loss of Manuel Valls, considered a great friend of Israel and the defender of the French Jewish community.Ever since the Hyper Cacher terrorist attack in January 2015, then-prime minister Valls repeatedly declared how much his government was engaged in fighting extreme Islamist terrorism and how much his government was committed to battling antisemitism.On the Israeli-Palestinian issue, contrary to Hamon and other socialist leaders, Valls was in no hurry to recognize a Palestinian state, and even said so explicitly. He also didn’t express much enthusiasm over his government’s Paris Conference initiative, leaving the bulk of it in the hands of Foreign Minister Jean- Marc Ayrault.Recently, Hamon tried to re-equilibrate to some extent his Israel-Palestine positions, saying that Israel must be integrated into the region. While supporting the anti-settlement UNSC resolution 2334, Hamon told the French TV station BFM that, “I consider that Europe has an historic responsibility to integrate Israel into a non-hostile framework... Today, this environment is hostile, and it will stay so as long as Palestine is not a state.”Some of his advisers noted that, in 2011, Hamon publicly opposed attempts to boycott Israel.Leaders within the French Jewish community are careful not to express any political views apart from rejecting the National Front Party with its presidential candidate Marine le Pen. But several Jewish voters said they were at a loss over the upcoming elections. Fillon, the rightwing candidate, is reaching out to Iran and to Russia, Hamon has indicated he will adopt European left-wing positions on Israel, and the young Emmanuel Macron in the center seems undecided on Middle East issues.Currently, most pundits predict Hamon will not make it to the second presidential election campaign. But this could change. Fillon must now face a scandal that erupted just a few days ago, accusing him of offering his wife a fictive position as a parliamentarian aid.In such a set-up, no scenario could or should be excluded.