The drive to advance Kristallnacht as a means to turn Israel into an abnormal state is not limited to Germany but is in vogue across Western Europe. 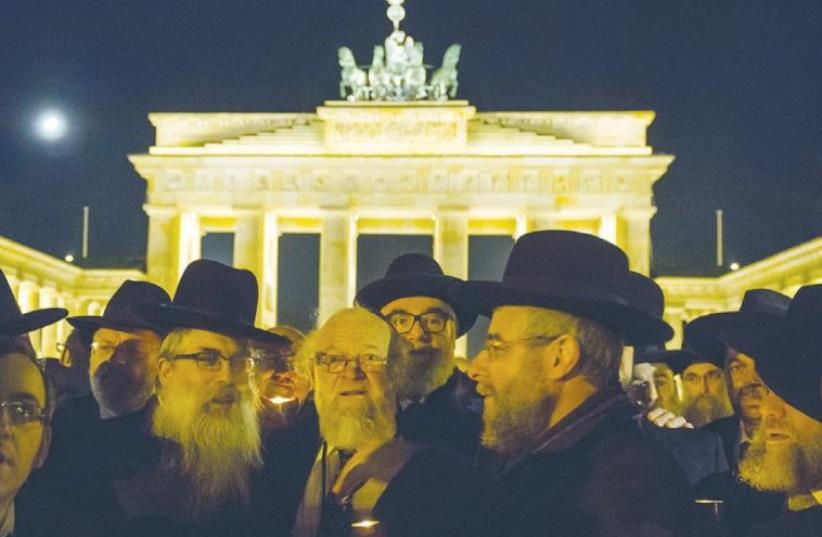 MEMBERS OF the Conference of European Rabbis carry candles in Berlin in 2013 to commemorate the 75th anniversary of Kristallnacht.
(photo credit: REUTERS)
Advertisement
Each year on November 9, Berlin remembers the lethal anti-Semitic pogroms carried out by Germans against Jews and synagogues in 1938 – the so-called Kristallnacht anniversary. The commemoration events punctuate German cities and towns and are largely decoupled from Israel.“If Israel’s existence is up for consideration, that is actually a scandal that we must deal with today. But we are, so to speak, now present to stop the 1938 Kristallnacht,” German- Jewish journalist Henryk M. Broder said sarcastically.Broder neatly captured the ongoing absurdity in segments of German society that seek to dismantle Israel while immersing themselves in Kristallnacht remembrance.This year, Israel took an atypical diplomatic step to breathe some change into Holocaust remembrance in Germany.In response to the city of Munich sponsoring a Boycott, Divestment, Sanctions lecture against Israel, the head of Israel’s consulate in Munich, Dan Shaham, told The Jerusalem Post: “The racist, anti-Semitic character of this movement, which calls for a boycott of Israel, was again made clear two days before the Kristallnacht remembrance.”Shaham appealed to Munich’s mayor on Friday to cancel the Saturday anti-Israel BDS event.Mayor Dieter Reiter refused to exercise his mayoral power, despite the fact that he told the Post that he rejects BDS. The BDS event went ahead in a tax-payer sponsored city room.Germany has developed an entire cottage industry devoted to “Israel criticism.” Jenny Becker, a representative from the city’s cultural department, which approved the BDS lecture, justified the event to the Post, saying, “From our view there exists a difference between Israel criticism and anti-Semitism.”On Sunday, Reiter spoke at the Munich Jewish community’s Kristallnacht commemoration event. Courting the enemies of Israel – BDS – is not limited to the Social Democrats in Munich. Ilse Aigner, Bavaria’s economic minister from the Christian Social Union party, just traveled to Iran and euphorically embraced Iran’s regime. Aigner seeks to open a Bavarian state office in Tehran.For the city of Munich and greater Bavaria – one could argue – the attacks on Israel bleed into Holocaust commemoration as a form of inoculation against charges of anti-Semitism.Put simply, how can Germans, who advocate BDS, be contaminated with anti-Israel anti-Semitism if they mourn the burning of Synagogues and murder-wave of Jews in 1938? The timing of Munich’s pro-BDS event coinciding with Kristallnacht may or may not be a coincidence.Perhaps it is a case of a lack of knowledge. After all, Reiter’s spokesman, Stefan Hauf, told the Post that he was not familiar with the BDS movement and had to consult the Internet.While this year the Social Democratic mayor chose not to flex his municipal power to stop the event, last year the former head of The Left party in the Bundestag, Gregor Gysi, pulled the plug on a BDS lecture in its parliamentary room. He did so due to the lecture’s content and its occurrence during the period commemorating Kristallnacht.One popular columnist for a large German daily told the Post several months ago, “the consciousness is not present” among journalists to fathom the major threats to Israel’s security.The drive to advance Kristallnacht as a means to turn Israel into an abnormal state is not limited to Germany but is in vogue across Western Europe. The European market’s demand for Holocaust events as a way to punish Israel exceeds supply.A telling example: Arab-Israeli MK Haneen Zoabi (Joint List) told on Sunday the left-wing group Platform Stop Racism and Exclusion in Amsterdam: “Kristallnacht didn’t suddenly fall from the sky, come out of nowhere, it was the result of a development over time. We can see a similar development happening in Israel over the last several years.”One of Germany’s sharpest commentators on the country’s grappling with its Nazi past was Eike Geisel, who would have turned 70 this year. Geisel did not live to write about BDS, but he delved into the motivations of alleged peace groups that later morphed into pro-BDS NGOs.“To be against Israel in the name of peace is something new.... This new anti-Semitism does not arise from base instincts, nor is it the product of honorable political intentions. It is the morality of morons.”Geisel continued, “Anti-Jewish...hostility arises from the purest human needs; It comes from the yearning for peace. It is therefore entirely innocent; It is as universal as it is moral. This moral anti-Semitism completes Germany’s restoration to goodness, in that it heralds the perfection of inhumanity: the banality of good.”By commemorating Kristallnacht, many Germans may believe that they are combating German anti-Semitism. Yet by sponsoring BDS and promoting trade with the Islamic Republic of Iran, which seeks to obliterate Israel, things have turned out topsy-turvy.Benjamin Weinthal is fellow at the Foundation for Defense of Democracies.