She drew comparisons between the tepid international response to the refugee crisis and that of Nazi Germany. 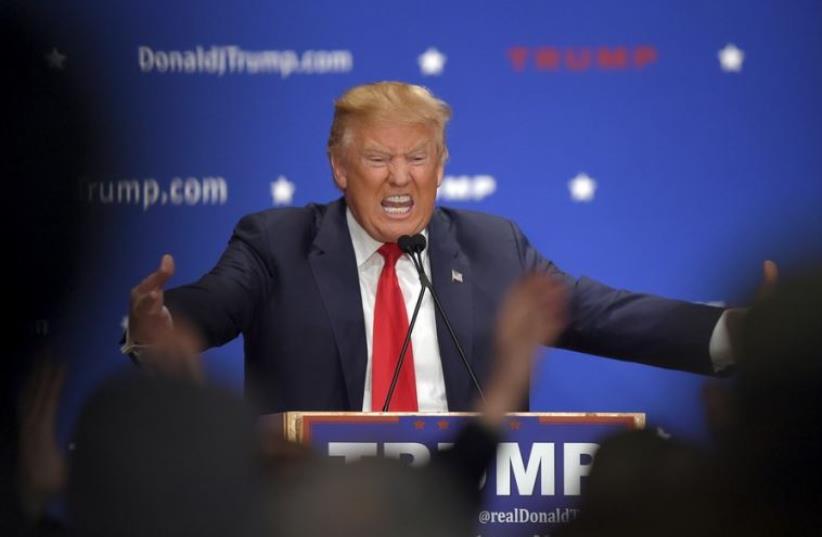 US Republican presidential candidate Donald Trump addresses the crowd at a campaign rally in Farmington, New Hampshire
(photo credit: REUTERS)
Advertisement
In an op-ed piece written for Newsweek on the eve of Holocaust Memorial Day, Eva Schloss, the stepsister of Anne Frank, likened Republican presidential hopeful Donald Trump to Adolph Hitler.Schloss was a childhood friend of Anne Frank and after the war, her mother, Fritzi, married Frank's father Otto. The plight of the asylum-seekers resonated with Schloss as she recounted the alienation and isolation she and her family experienced upon immigrating to Belgium shortly after the Nazis annexed Austria in 1938.Schloss criticized Trump for fomenting hatred and intolerance in statements he made regarding asylum-seekers: "If Donald Trump becomes the next president of the US it would be a complete disaster. I think he is acting like another Hitler by inciting racism."Additionally, she drew comparisons between the tepid international response to the refugee crisis and that of Nazi Germany, even asserting that the current situation is more tenuous as the allies "worked together to combat the terrible threat of Nazism."She argued that if Germany has successfully taken in over a million refugees to date, then it is the moral responsibility of larger nations such as Canada and the US to do so as well. This is not the first time that similarities have been perceived between Trump's pre-election rhetoric and the Nazi philosophy. Democratic presidential contender Bernie Sanders referenced the Holocaust and condemned Trump’s “anti-Muslim rhetoric and hatred” in a visit to a Washington mosque.In November, Trump controversially confirmed his support for a database to track American Muslims, saying that he would move to require Muslims to register with the government if he were elected.