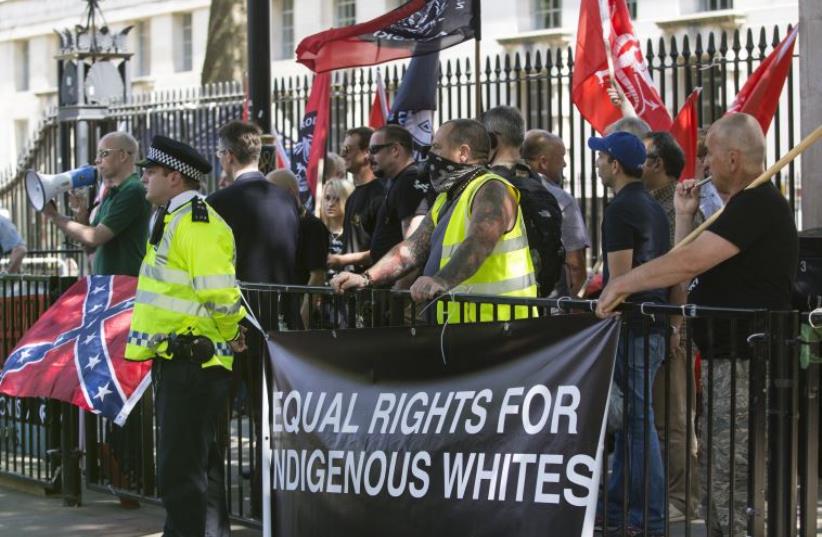 Anti-Jewish protest in London
(photo credit: JACK TAYLOR / AFP)
Advertisement
LONDON – The “Anti-Jewification” protest originally planned to be held in one of London’s Jewish community’s heartlands, Golders Green, on Saturday, ended up a noisy but poorly attended demonstration opposite the gates of Downing Street.Around 25 right-wing extremists, some carrying a Confederate flag, were tightly penned in by police as they started their strictly regulated, one-hour demonstration at lunchtime. They were considerably outnumbered by an array of anti-Nazi protesters mingling with left-wing Jewish groups displaying placards attacking the extremist right-wingers, totaling about 100.Several large Israeli flags were on display, but with Whitehall’s Richmond Terrace a considerable distance from any Orthodox community, there were no signs of the group of uniformed Jews the neo-Nazis were planning to complain about, members of the Shomrim voluntary organization, effectively a Jewish neighborhood watch group which they refer to as a “Jewish police force.”But outnumbering them all was a massive police presence at least 20 vans full of about 200 officers called in from nearby areas who, as one told me, were enjoying the lovely sun and being paid overtime as well. They were deployed to keep the two sides apart and did so successfully, though those separating the small pen in which the neo-fascists were attempting to be heard felt the full blast of the anti-Nazi’s nearby who had the benefit of louder megaphones.Other than shouts of “Nazis out,” “Nazi scum – off our streets,” and later, of “Boring” aimed at the fascist group members, the event passed off peacefully, with, a Metropolitan Police spokeswoman later confirming to The Jerusalem Post, no arrests. The neo-Nazis were the object of catcalls as they walked, protected by police, from their protest to the relative safety of the nearby Westminster Underground station.The streets in the center of the Golders Green neighborhood by contrast were devoid of any of the neo-Nazi protesters.Earlier last week, in a move designed to avoid the risk of confrontation, police had ordered the right-wing extremists not to assemble in the area but to hold their event as a static demonstration in Whitehall.Public order legislation does not allow any demonstration to be canceled except under very special conditions.Nor were there any signs of the Jewish counter-demonstrators, thousands of whom had been expected to show their distaste for the “Anti-Jewification” and “Anti-Shomrim” protesters presence under the “Golders Green Together” coalition banners.In the run up to the far-right event, the Board of Deputies of British Jews teamed up with the London Jewish Forum and the anti-fascist campaigning group “Hope not Hate” alongside representatives from local Christian, Muslim, Hindu and Sikh groups and local politicians to make their views known.Dave Rich of the Community Security Trust said before the protest that it maintaining a security presence in Golders Green just in case.The CST had called in volunteers to give a feeling of security to those Jews including many haredim who reside in the area.Meanwhile police are still investigating a set of unpleasant daubings at a Jewish junior school, Simon Marks, on the fringes of the largest ultra-Orthodox community in Europe, in London’s Stamford Hill neighborhood. The slogan “F*** the Jews” was found painted on the school gates earlier last week, and on the same day, in an unrelated incident, two cars were found vandalized outside the Skyver Synagogue after a man was seen wielding an ax.