The figures released this week by the Metropolitan Police listed 483 anti-Semitic hate crimes documented over the 12 months that preceded Nov. 1, 2015. 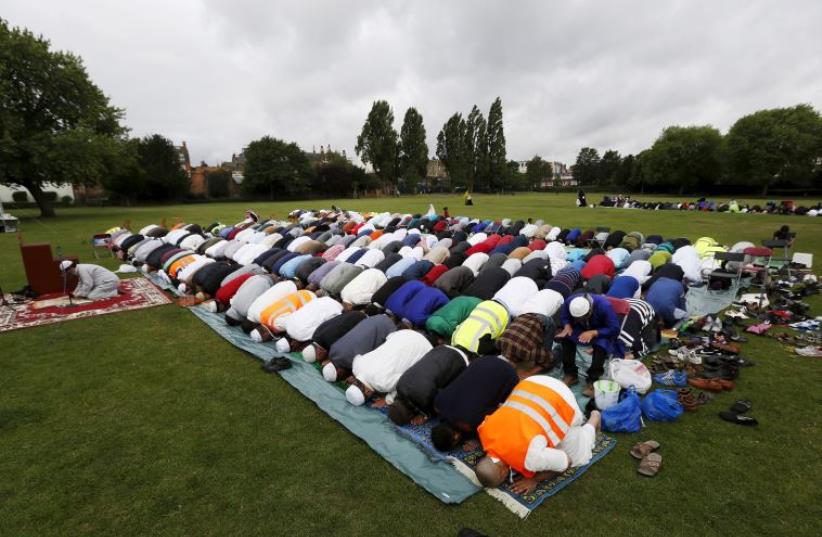 Muslims perform prayers for Eid-al Fitr to mark the end of the holy fasting month of Ramadan at a park in London
(photo credit: REUTERS)
Advertisement
The number of anti-Semitic and anti-Muslim hate crimes recorded this year by police in London was 61 percent higher than in 2014.The figures released this week by the Metropolitan Police listed 483 anti-Semitic hate crimes documented over the 12 months that preceded Nov. 1, 2015. In the previous 12-month stretch, 299 incidents were reported.Hate crimes against Muslims, described as “Islamophobic crime” by the London police, saw a similar increase, rising to 818 over the 12 months that preceded Nov. 1, 2015 from 499 in the previous 12 months.Commenting on the statistics, a spokesperson for the Community Security Trust, or CST, which is British Jewry’s watchdog and security service, told the Jewish News of London: “Any rise in anti-Semitic hate crimes is of concern. We hope that this reflects improved confidence amongst victims and witnesses to report hate crimes to the police as well as any rise in the number of hate crimes taking place.”Separately, a British court last week sentenced the far-right organizer of an anti-Semitic rally in July to three years in jail for posting hateful imagery online, the Daily Mail on Dec. 17 reported.Joshua Bonehill-Paine, 23, was found guilty of inciting racial hatred at Southwark Crown after he tweeted images of Auschwitz concentration camp and a bottle of weed killer ahead of the event in Golders Green, a predominantly Jewish area of north London. It was later moved elsewhere on police orders.Also last week, Britain’s education secretary, Nicky Morgan, was reported to have decided to look into the home-schooling of children, out of concern that they are being taught anti-Semitic attitudes in semi-organized Muslim religious frameworks known as madrasas, which are considered a form of home schooling.“For every parent doing a brilliant job, there may be someone filling their child’s mind with poison,” The Guardian quoted an unnamed senior government source as saying. “We just don’t know. We don’t have reliable figures.”