“The fact that no one sought to stop these chants or take any measures against those shouting them...constitutes a badge of shame for Croatia.” 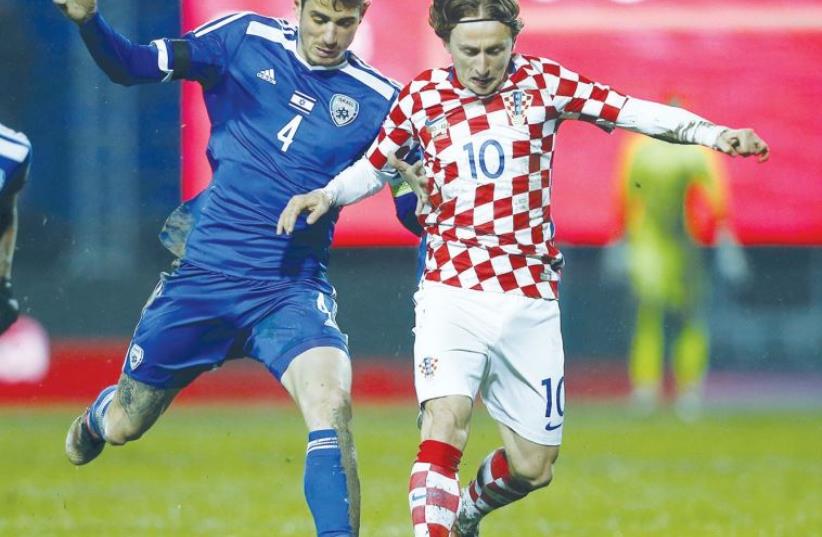 Israel midfielder Nir Biton (left) battles Croatia’s Luka Modric for the ball during last night’s 2-0 defeat in an international friendly in Osijek
(photo credit: REUTERS)
Advertisement
The Simon Wiesenthal Center has called for sanctions to be leveled against Croatian football fans after supporters chanted anti-Semitism slogans at a game against Israel’s national team last Wednesday.“Chants of Za dom spremni (Ready for the homeland) and Mi Hrvati! Ustasha, Ustasha! (We Croatians! Ustasha, Ustasha!) clearly express support for a country whose government organized the mass murder of hundreds of thousands of its minorities and political opponents,” said the center’s director for Eastern European Affairs Dr. Efraim Zuroff.“The fact that no one sought to stop these chants or take any measures against those shouting them, including Prime Minister [Tihomir] Oreškovic, or any of the Croatian ministers or officials of the Croatian Football Association, constitutes a badge of shame for Croatia.”The chants in question expressed support for the country’s World War Two Ustasha government, which was heavily involved in the extermination of the local Jewish population in its effort to “purge Croatia of foreign elements.”According to Yad Vashem, around eighty percent of Croatia’s Jewish population of thirty seven thousand were murdered by the Ustasha and the Germans.According to a report on Balkin Insight, a website, despite Prime Minister Oreškovic’s presence at the game, the government only issued a terse statement condemning the use of totalitarian symbols but declined to go into further detail.Speaking with the site, Zagreb Jewish community head Ognjen Kraus called the incident the “result of the politics in Croatia.”“What especially worries me that this is happening during the game, without drawing any reaction from those who were there, headed by the organizer and Prime Minister who just sat there,” he was quoted as saying.In 2015 a scandal erupted after a swastika was found burnt into a football pitch in Poljud stadium in the Croatian city of Split.