'Anti-Semitism impossible to erase in the blink of an eye,' Belgian minister says

Belgian interior minister among hundreds who attend Hanukka candle lighting ceremony in the shadow of terrorist threat to Brussels. 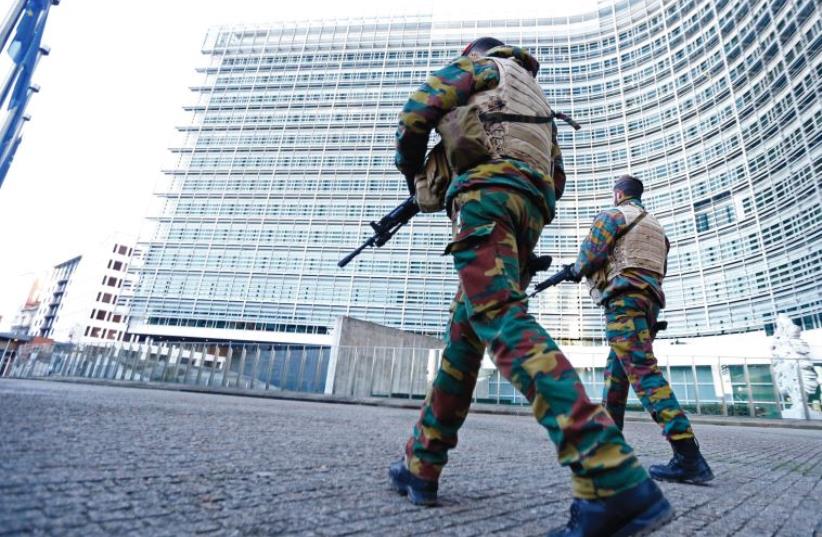 BELGIAN SOLDIERS patrol outside European Commission headquarters in Brussels as police searched the area following the Paris terror attacks in mid-November that claimed the lives of 130 people
(photo credit: REUTERS)
Advertisement
A public candle-lighting ceremony to celebrate Hanukka was held in Brussels Monday evening as the capital of Belgium and the seat of the European Union finds itself at the heart of Europe’s current struggle against Islamist terror on the continent’s soil.The event, held by the European Jewish Association, featured a speech by Belgium’s interior minister and was attended by several hundred people. The celebration came less than a month after Brussels was put on lockdown due to a terrorist threat and the multi-pronged terrorist attack that killed 130 people in Paris was hatched by terrorists residing in the city.In May 2014, an Islamist radical killed four people, including two Israelis, in the city’s Jewish museum.Belgian Deputy Prime Minister and Interior Minister Jan Jambon said at the event that his government has made the battle against radical extremism and terrorism a top priority since the terrorist attack on the museum.The minister acknowledged that “we are not going to dismantle the ideological frameworks of Islamic State and similar organizations as easy as that. Their anti-Semitism is impossible to erase in the blink of an eye.”Jambon mentioned two areas where the government can contribute: reinforcing security, “even though zero risk is completely impossible,” and defending democratic values and norms. The minister said the Belgian government had adopted no less than 30 measures to reinforce security, including adapting legislation to punish terrorism more effectively.“All those who went off fighting in Syria or Iraq and return to our country will irrevocably be put in prison,” he said, adding that “people known to us as preachers of hatred or extreme violence are controlled more tightly than before.”Since January, soldiers have been guarding sensitive buildings and locations which are under increased threat level, such as international institutions and embassies, but also synagogues and other Jewish sites and institutions, both in Brussels and Antwerp, where most of Belgium’s Jews live.The government, Jambon said, has allocated four million euros for the security of the Jewish community, to be used for camera surveillance, armored windows and doors, and alarm systems.However, he stressed that “for us it is unacceptable that whole communities feel unsafe and would hesitate to stay in our country for that reason.”He also noted that the battle against violent fundamentalism and terrorism needs to be waged on the European level.“We have to devote maximum effort to the exchange of data,” he said. Apart from repressive measures, Jambon said “we must also work on prevention.”“It is extremely important that we promote our democratic values and norms to form an ‘antidote’ for the messages spread by hate preachers... Today, lots of young Muslims only hear one bell, one ideology,” he said.“We must make efforts to gain access to their bubble.”