Caan, who died Wednesday at 82, staked out rare ground in Hollywood as a Jew known for blockbuster tough guy roles.

James Caan stands under casino lights in a scene from the 1974 film "The Gambler."
(photo credit: Paramount/Getty Images)
Advertisement

(JTA) — In 2009, James Caan, one of the leading movie stars of the 1970s, told Vanity Fair that he was twice honored as New York City’s “Italian of the Year.” The kicker: He’s not Italian.

Caan, who died Wednesday at 82, according to a post from his family to his Twitter account, staked out rare ground in Hollywood as a Jew known for blockbuster tough guy roles — and for almost always being considered anything but Jewish.

The Italian reputation dogged him after what was arguably his most famous role, as mafioso Sonny Corleone in “The Godfather,” which he reprised briefly in “The Godfather Part II.” (In that same Vanity Fair profile, Caan said that people often approached him in public to see if was a hot-tempered as his Corleone character.)

One of his earliest roles, in the 1966 Howard Hawks classic western “El Dorado,” also gave him a longtime cowboy moniker. Caan said in an interview earlier this year that he worked as a professional rodeo performer for years before becoming famous, and that Steve Wynn, the disgraced Jewish casino magnate, used to introduce him to people in Las Vegas as “the best Jewish cowboy” he had ever met.

Born in the Bronx, Caan was raised by working class German-Jewish immigrants in Sunnyside, Queens, where he has said he developed some of his tough guy mojo. His father was a kosher butcher, and while he worked for him at various times, Caan looked to avoid the meat trade. 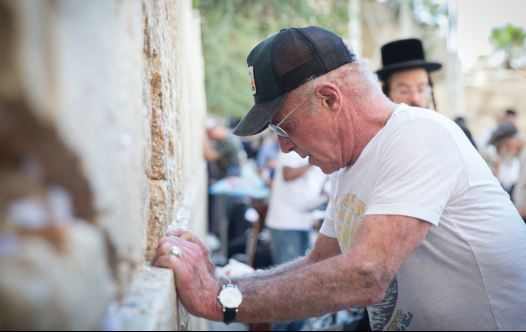 He played football for two years at Michigan State University, where he was a member of the Jewish Alpha Epsilon Pi fraternity. He transferred to Hofstra University on Long Island, where he became friends with fellow undergraduate Francis Ford Coppola.

Some of Caan’s other notable performances include a football player diagnosed with cancer in “Brian’s Song” (1971); a sailor who falls in love with a prostitute in “Cinderella Liberty” (1973); a professor with a gambling addiction in “The Gambler” (1974); and the protagonist of “Misery” (1990), a famous adaptation of the Stephen King novel. He also played Barbra Streisand’s love interest in “Funny Lady” (1975), a sequel to the Fanny Brice story in “Funny Girl.”

A later career highlight came in 2003, as a side character in the Will Ferrell Christmas-themed hit “Elf.”

In 2017, at age 77, Caan starred in “Holy Lands” as a Jewish doctor who moves from New York City to Israel, where he starts a pig farm in Nazareth. The real-life Caan had visited Israel in 2016 and reportedly said, when asked by The Media Line, that no one had ever questioned his support of Israel.

“I don’t hang around with antisemites if that’s what you mean, and I don’t know any,” he said, “and if I did, I’d punch them in the face.”

In his 2021 memoir “Yearbook,” Seth Rogen calls Caan “a scary Jew, which is almost unheard of.”