Rejection of BDS by continental student organizations is believed to the first major European opposition to the hubs of anti-Israel and anti-Semitic academic initiatives in the UK and US. 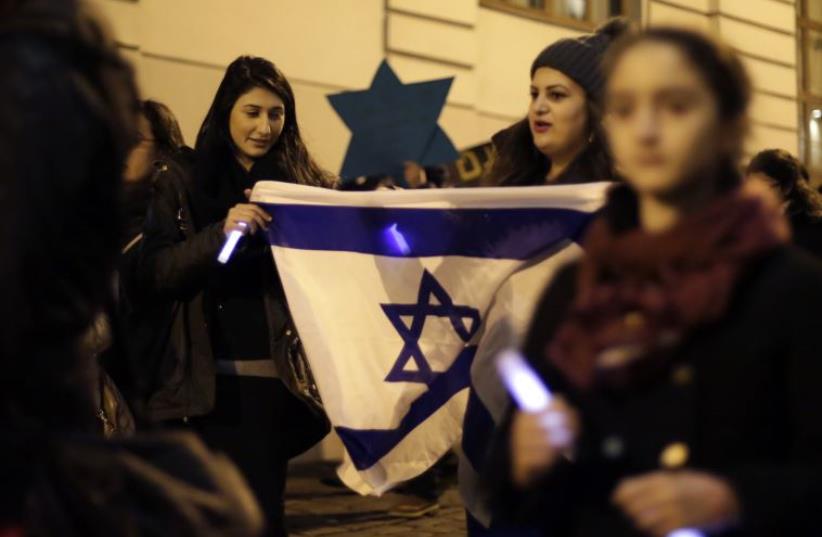 Members of the young Jewish community attend a commemoration ceremony for Holocaust victims in front of the synagogue in Vienna [File]
(photo credit: REUTERS)
Advertisement
BERLIN --Student associations at the University of Vienna issued a statement on Wednesday, declaring their opposition to every form of anti-Semitism, including the BDS (Boycott, Divestment, Sanctions) movement targeting Israel.“As student representatives it is important for us to criticize the academic boycott against Israel, which entirely excludes Israeli academics,” the student council of the University of Vienna said.The rejection of BDS by continental student organizations is believed to the first major European opposition to the hubs of anti-Israel and anti-Semitic academic initiatives in the United Kingdom and the US.The student council added, ”There are rising violent anti-Semitics attacks on , above all, American universities, which are connected to BDS and Israel Apartheid Week.  Academic events from Jewish professors are regularly disrupted. And hostility toward the existence of Israel is expressed by the burning of Israeli flags.”Camila Garfias, a member of the association of socialist students (VSStÖ), said “Anti-Semitic violence is part of daily life in Europe.” The association of socialist students is affiliated with the Social Democratic Party in Austria. (SPÖ). Austrian Chancellor Werner Faymann is from the SPÖ.The student group noted that Jews in France no longer feel safe and are immigrating to Israel. An anti-Semitic riot  took place against the Israeli soccer Maccabi Haifa in Salzburg; businesses in Paris were vandalized with anti-Semitic slogans, as well as Synagogues in Germany. The students said their examples of the manifestations of anti-Semitism are just a few and anti-Semitism remains part and parcel of everyday life in Europe.The Green Party students (GRAS), the Socialist students, and Communist students-Left List, which are part of the Austrian Students Union, blasted BDS in their joint statement.The groups form the governing coalition in the Austrian student parliament at the University of Vienna."As a student organization on the University of Vienna, we condemn every form of anti-Semitism, as well as from German nationalist fraternities, and anti-Semitism in the new form of BDS," Karin Stanger from the Green Party student group said.The Left List student Jana Reischl  slammed the extremist Freedom Party of Austria (FPÖ)  for spreading "anti-Semitic cartoons and minimizing the crimes of National Socialism.“