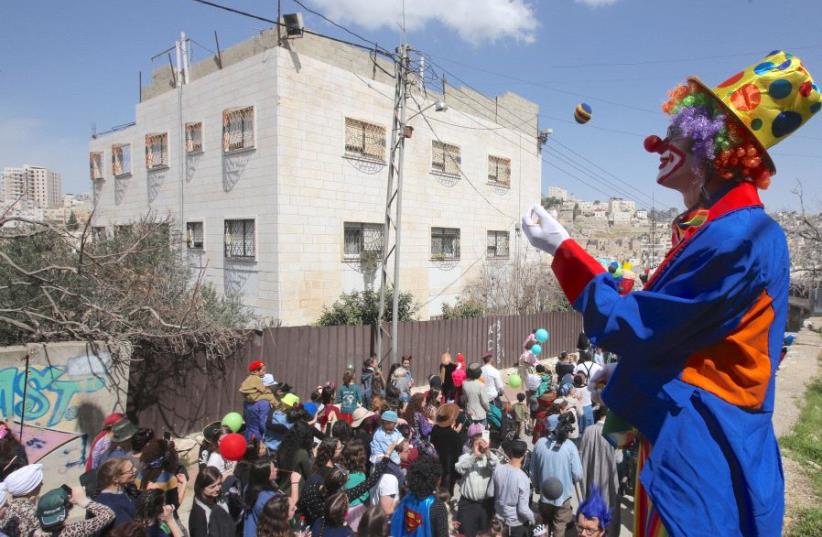 Purim in Hebron
(photo credit: MARC ISRAEL SELLEM)
Advertisement
Seven Jewish schools in Baltimore announced on Friday that they would be cancelling all extracurricular Purim activities due to the coronavirus outbreak. The schools include Bais Yaakov School for Girls, Bnos Yisroel, Cheder Chabad, Ohr Chadash Academy, Talmudical Academy, Torah Institute and Toras Simcha."After taking into consideration nationally published information by the CDC, state and local health departments, Johns Hopkins University’s recent precautionary measures to cancel public events, the precautions of other communities and institutions, and Torah Umesorah’s recent recommendations for schools provided by their medical consultants and Daas Torah, we have decided that it is unfortunately necessary to cancel all upcoming extracurricular Purim events for our schools," the schools wrote in a letter to parents.The schools emphasized that regular classroom activities would still take place.On Thursday, Bnos Yisroel sent three girls home because they had "possible indirect contact" with a person who was diagnosed with coronavirus."We have been made aware of possible indirect contact between three of our students (sisters) and someone who tested positive for the Coronavirus in New York. We have been in touch with the Baltimore City Health Department, the CDC, the Department of Health and Local Rabbanim. Per their recommendations, the three students were sent home earlier today," the school wrote in a statement.Baltimore Rabbi Ariel Sadwin told the Baltimore Sun that the girls were possibly indirectly in contact with someone from Westchester County, New York. According to Johns Hopkins' coronavirus tracking map, as of Sunday there are no cases of coronavirus in Baltimore, but there are three confirmed cases in nearby Montgomery County, Maryland and one confirmed case in Washington, DC. The map also indicates that there are 57 confirmed cases of coronavirus in Westchester County, New York.