Baseball’s back: Here’s a look at 8 Jewish major leaguers and a manager

“Pillar is probably the best of them all now. He’s got a good glove, a good bat and speed.” 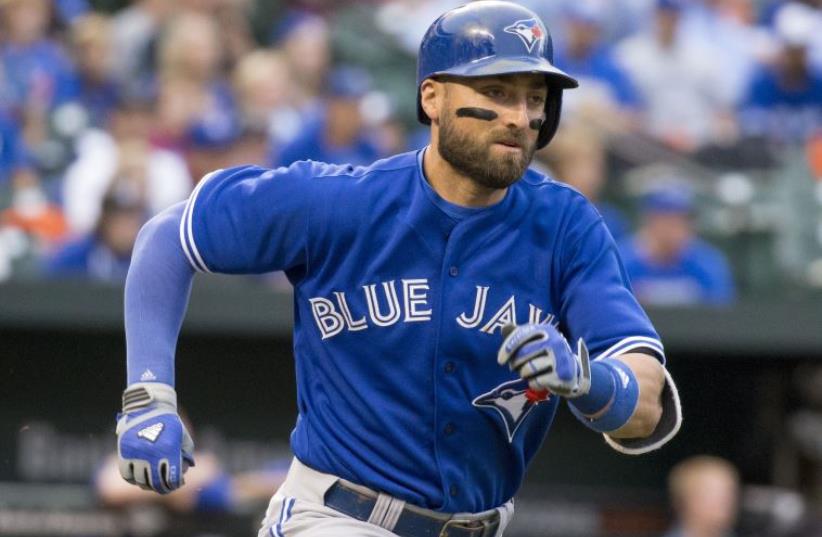 Kevin Pillar on September 30, 2015
(photo credit: KEITH ALLISON/WIKIMEDIA)
Advertisement
Will Joc Pederson rebound from his second-half struggles of last season? Can Kevin Pillar build on his strong 2015 campaign? Will injuries derail one-time MVP Ryan Braun?These are some of the questions to be answered as these Jewish players and others get set for the Major League Baseball season that opens Sunday.Pederson (Los Angeles Dodgers), Pillar (Toronto Blue Jays) and Braun (Milwaukee Brewers) – all outfielders – are among the position players who will start for their teams. They will be joined by second baseman Ian Kinsler of the Detroit Tigers, who also have a Jewish manager, Brad Ausmus. And Danny Valencia, a solid hitter, appears to be the starter at third base for the rebuilding Oakland Athletics.
(Photo: Ryan Braun, Credit: Reuters) Among pitchers, right-hander Scott Feldman will be part of the Houston Astros’ starting rotation. And the Miami Marlins bullpen will include Craig Breslow, who has mostly made his living for 10 years as a lefty specialist, the last three with Boston. With the Red Sox he earned a World Series championship ring in 2013, then last year achieved a first: He started a game after making 522 appearances in relief.In Oakland, outfielder Sam Fuld joins Valencia to make the Athletics the only team with multiple Jewish players. Fuld is injured and will start the season on the disabled list.
(Photo: Craig Breslow, Credit: Reuters) Boston had been “the” Jewish address of late: The Red Sox had Breslow, catcher Ryan Lavarnway and outfielder Ryan Kalish in 2012, and infielder Kevin Youkilis and outfielder Adam Stern played together in 2005 and 2006. Only Breslow of that Boston bunch remains in the majors.“It’s the first time in years the Red Sox don’t have a Jewish ballplayer,” said Ephraim Moxson, co-publisher of the Jewish Sports Review newsletter.Several others who have played in the majors weren’t fortunate enough to make Opening Day rosters. They include infielders Nate Freiman, Ike Davis, Josh Satin and Cody Decker, as well as relief pitcher Josh Zeid.Up-and-comers include shortstop Alex Bregman, the second overall pick in last June’s collegiate draft by the Astros, and Zach Borenstein, an outfielder in the Arizona Diamondbacks system. Bregman hit .294 for two of the Astros A teams last season, while Borenstein hit .281 in spring training before being demoted to the minors.
(Photo: Sam Fuld, Credit: Reuters) Pederson shouldn’t have worries about being sent down, but will look to avoid the second-half doldrums he suffered last season. The center fielder had started for the National League in last summer’s All-Star game as a rookie one night after finishing second in the home-run-hitting contest. But his horrid second half, which included his benching as the starter, saw his batting average fall to .210 and he finished with a team record-tying 170 strikeouts. Still, he slugged 26 homers and played stellar defense.Pillar could be the real deal. He was outstanding in the field, finishing second among all center fielders in defensive ratings. While lacking Pederson’s power, Pillar showed far better skills as an all-around hitter – so much so that he’s been elevated to leadoff in the batting order of one of the majors’ best offensive clubs. In 2015, his first full season in the majors, Pillar hit .278, socked 31 doubles and stole 25 bases.“Pillar is probably the best of them all now” among Jewish major leaguers, Moxson said. “He’s got a good glove, a good bat and speed.”  Braun, a left fielder starting his 10th season, possesses those tools, too, and remains the brightest light on a rebuilding Brewers team that finished last a season ago in the National League Central. But he’s coming back from postseason lower-back surgery that affected him even through spring training.Last year Braun made the All-Star team for the sixth time and is steadily building a Hall of Fame-level career — if his suspension in 2013 for using performance-enhancing drugs can be overlooked. Keep in mind that he’s just 31.
(Photo: Scott Feldman, Credit: Reuters)

The Tigers are also looking to return to contention and will need Kinsler to have a typically solid season, as he did in 2015 batting .296, though driving in 19 fewer runs than the previous campaign. A sharp falloff in pitching doomed the Tigers, who finished with the American League’s second-worst record and last in the Central Division. The poor showing nearly cost Ausmus his job one year after winning the division in his managerial debut.
(Photo: Joc Pederson, Credit: Reuters) In Houston, Feldman provides veteran leadership to a young staff headlined by Cy Young Award winner Dallas Keuchel. Feldman missed half of 2015 with knee and shoulder injuries, making just 18 starts as the Astros emerged as a wild-card team. Feldman could find himself pitching with much more at stake in October, as the Astros are favored by some to contend for the World Series this year. Pillar’s Blue Jays will provide stiff competition, as Toronto is the consensus pick to reclaim the A.L. East crown.