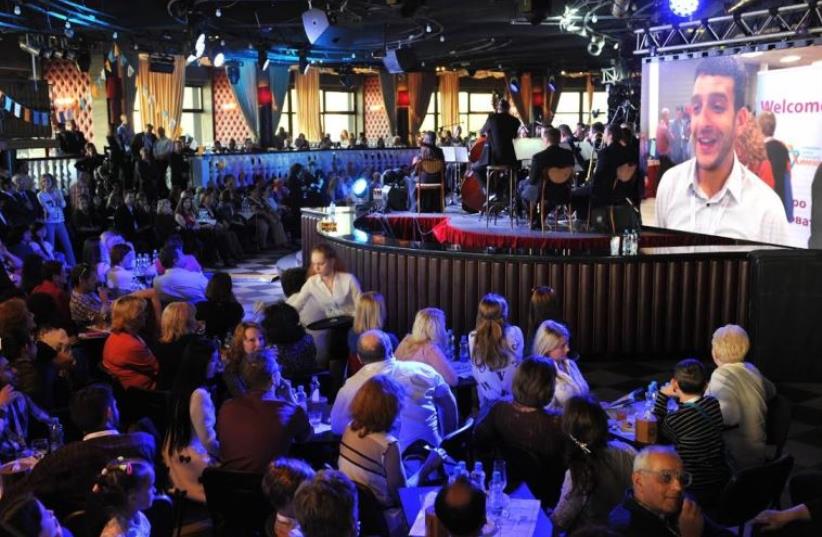 Limmud FSU Belarus event.
(photo credit: BORIS BUCHMAN)
Advertisement
Hundreds of Jews from across Belarus gathered in Minsk for the capital’s first Limmud conference, a festival of Jewish learning that also drew visitors from Israel.Approximately 750 people came to the three-day event’s opening session Friday, organized by Limmud FSU together with Belarusian officials and the local Israeli embassy.Government officials often attend the openings of Limmud FSU conferences, but such partnerships are rare.“This event – and the government’s support – underscores the strength of contemporary Jewish life in Belarus,” said Limmud FSU co-founder Chaim Chesler.Sandy Cahn, his Limmud FSU co-founder, said: “We are witnessing a new era of Belarus Jews that have become completely independent and have defined the framework of Jewish life on their own, and for themselves.”The first Limmud FSU conference in Belarus was held in 2013 in Vitebsk, a city located approximately 180 miles northeast of Minsk.Among top speakers at the conference in Minsk will be former Israel Defense Forces Gen. Uzi Dayan, whose family roots trace back to Belarus. He is a nephew of Moshe Dayan, a legendary former defense minister of Israel.The Limmud event will feature a tour of the town of Mir, 52 miles southwest of Minsk, which Uzi Dayan’s grandfather, Moshe Rabinovich, called home. It had a Jewish community of more than 2,000 people. It was destroyed in 1941 by the Nazis.Other guest speakers include descendants of Abba Ahimeir, a right-wing Zionist activist, and Berl Katznelson, a socialist founder of Israel, both of whom hail from Belarus.The Republic of Belarus, which has been called Europe’s last dictatorship, is a relatively closed nation where tourists from many Western nations, including European Union member states and the United States, may not enter without a formal invitation from a Belarusian host.However, Belarus has a visa waiver agreement with Israel, which was announced during the second Limmud FSU event in Vitebsk in 2014.In 2013, the EU announced a strengthening of its financial sanctions on Belarus for alleged human rights abuses. “This is because not all political prisoners have been released, no released prisoner has been rehabilitated, and the respect for human rights, the rule of law and democratic principles has not improved in Belarus,” the Council of the European Union wrote.