The Jewish Crisis Management Team of Antwerp urged the community to comply with these rules and declared the next three days to be days of mourning with celebrations and public feasting forbidden. 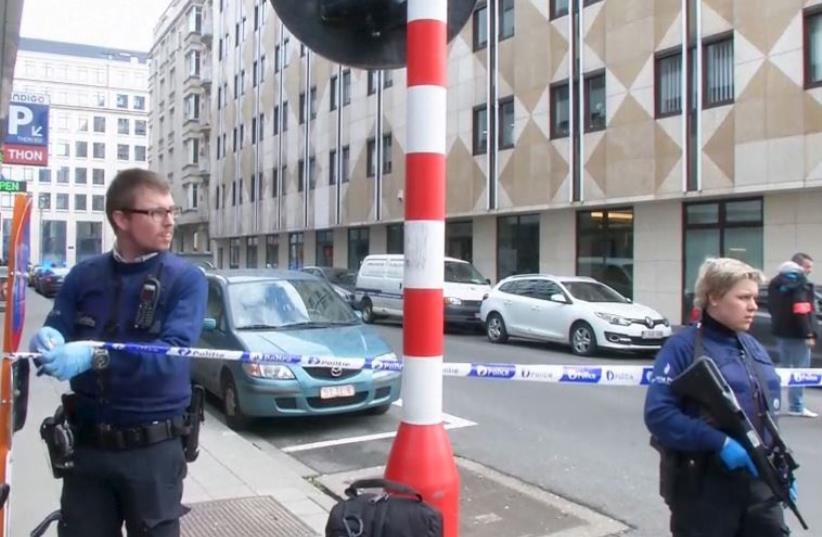 Emergency personnel are seen at the scene of a blast outside a metro station in Brussels, in this still image taken from video on March 22, 2016
(photo credit: REUTERS)
Advertisement
A clear set of rules for Purim celebrations were released on Wednesday in a press release from the office of the High Commissioner of the Antwerp Police in light of the terrorist attacks that took place in Brussels on Tuesday, according to reports by local media. According to the report, due to heightened security concerns, police have requested that the Jewish community avoid wearing masks that cover the face in public on Purim and requested that no toy weapons be carried even by children. Additionally, the police requested that no fireworks be set off and to avoid using any device that may cause a loud banging sound. The Jewish Crisis Management Team of Antwerp urged the community to comply with these rules and declared the next three days to be days of mourning in which celebrations and public feasting are strictly forbidden. "With police and army on very high alert, all these cause confusions and are potentially dangerous," said the Crisis Management Team."No public feasting is allowed. This includes mobile floats, decorated buses, organized marches and parties and music in the street. Police will enforce these rules." The Jewish community of Brussels had prepared two major events for this week on the occasion of the Purim holiday celebrations but both events have been cancelled following the recent terror attacks in Brussels.“The Jewish community here in Brussels and in Europe in general is not surprised,” he said. “We’ve been receiving alerts for a long time now. Despite the shock the city experienced, we were not surprised. It was only a matter of time before such an attack happened," said Rabbi Menachem Margolin, Director of the European Jewish Association (EJA) and head of the Rabbinical Center of Europe (RCE)."We always knew about warnings, we knew where we were living. We hope that this wave will end as soon as possible so that it won't harm the Purim holiday," he said."The government has raised preparedness to the highest level, that means an automatic cancellation of all public events - there are a lot of Jews here."The authorities have requested everyone in the capital city stay home over the next few days.“We evacuated family by family from the Jewish school,” Rabbi Margolin explained as he described the day. “We feared additional attacks and contacted the families. To avoid panic, we asked that they take the children one at a time. Since then, all the families are at home. We obey the instructions from the security services.”He has no doubt there are additional terror cells still lurking around Brussels.“The fact that the terrorist from Brussels was able to hide in the city for several months means there was someone helping him, which is why I believe these were not the last attacks we’ll be seeing here. The routine right now is difficult. There’s a feeling of insecurity."He said he did not believe the motive for the new attacks had been anti-Semitic. “The attacks were not directed at Jews but against all the citizens of Europe who are getting used to a new reality,” he said, adding, “God is guarding us and we’re doing everything in our power to make sure that all the Jews in our community are safe.”Jewish schools and institutions in both Brussels and Antwerp have been shut down. European Jewish Press contributed to this report.