Ben Cohen and Jerry Greenfield were protesting against corporate political spending at a rally that is part of the “Democracy Spring” demonstrations. 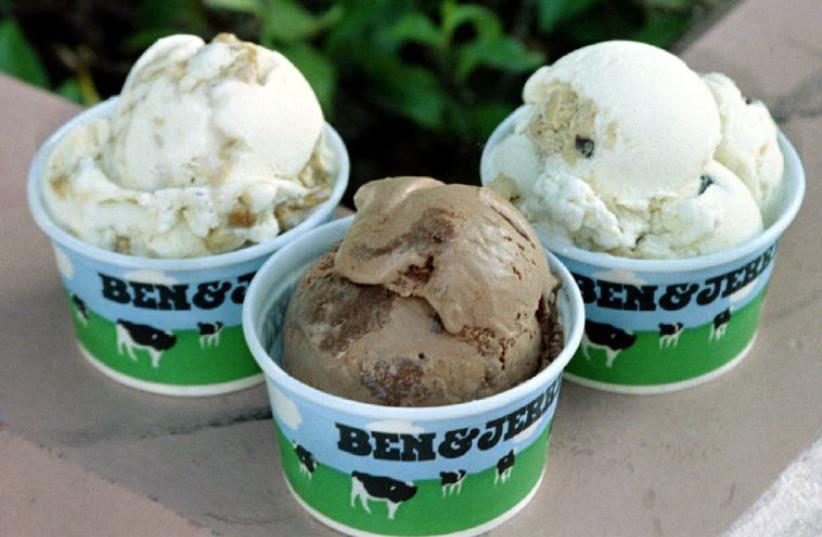 Ben & Jerry's ice cream
(photo credit: REUTERS)
Advertisement
The Jewish co-founders of Ben & Jerry’s ice cream were arrested Monday during a protest outside the Capitol building in Washington DC.Ben Cohen and Jerry Greenfield were protesting against corporate political spending at a rally that is part of the “Democracy Spring” demonstrations that have been taking place in Washington for the past week, organized by Democracy Awakening.They were charged with “unlawful demonstration activity” and later released, according to the Associated Press.Over 1,200 people have been arrested during the week’s protests, according to reports.In a statement posted on the company’s website, the company explained “Why Ben & Jerry Just Got Arrested.”“It all comes down to a simple idea that we believe in whole-heartedly: if you care about something, you have to be willing to risk it all—your reputation, your values, your business—for the greater good,” the statement said.“We all have a role to play in the fight for justice. Join us this year as we spread the word and take action. Democracy belongs in the hands of all Americans, not in the pockets of a few billionaires. And no citizen who wants to vote should ever be kept from the polls. Democracy Awakening inspired hope and created excitement that all participants will carry back home with them to their own communities,” the statement concluded.Later on Monday Cohen and Greenfield scooped ice cream to students on the campus of George Washington University and spoke to the students about campaign finance overhaul, the New York Times reported.“Money in politics is really the root cause of most of the evils that confront us,” Cohen said according to the Times. “We literally have the best Congress that money can buy.”Ben & Jerry’s is based in Vermont and both men are supporters of Bernie Sanders, the state’s Independent senator, and his candidacy for the Democratic nomination for president.