'Beware of Jews' sign found in haredi area of London

Franck Allais said the sign was part of an artistic project, which also included a sign depicting a woman pulling a shopping trolley and another of a man pushing his wheelchair and a cat. 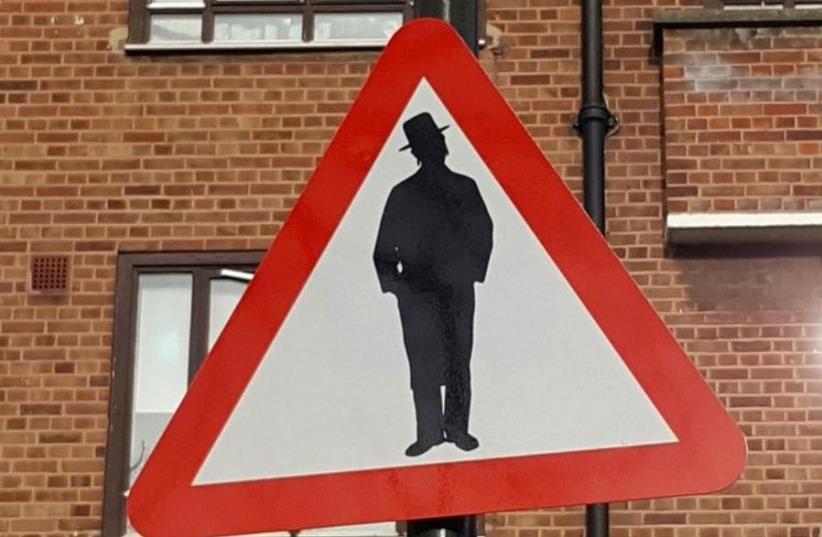 "Artwork" of Haredi Jew in London
(photo credit: SHOMRIM)
Advertisement
A warning sign featuring a Jew that appeared in Stamford Hill, a London area home to a large Orthodox Jewish community, turned out to be part of a photographer’s art project after making waves in the British media.The red triangular warning sign, featuring a silhouetted image of a man in Orthodox Jewish clothing and a hat, was attached to a lamppost near a synagogue. Jewish neighborhood watch group Shomrim reported the sign, dubbed by British media as a “Beware of Jews” sign, to the Metropolitan Police Service and the local council and said an investigation had subsequently been opened.“Disgusting. Unacceptable,” British shadow Home Secretary Diane Abbott wrote on Twitter, in response to the report.“Despicable, nasty behavior that has absolutely no place in our community,” tweeted David Lammy, another Labour lawmaker from a nearby London area.Municipal authority Hackney Council said on Wednesday it had not found the sign, which was one of a number of fake warnings in the area, and believed it had already been removed.After the sign gained significant media attention and the attention of public officials, photographer and artist Franck Allais claimed responsibility and apologized for the offense he had caused.He told various British media outlets that the sign was part of an artistic project intended to celebrate diversity, in the form of a series of different characters crossing the road, such as a woman pulling a shopping trolley and a man pushing his wheelchair.“It was a project about crossing the road... how everyone is different, everyone has an identity.There is not only one sign in the street. I put more signs up in the street, but only this one got noticed. I am sorry for any offense caused,” The Guardian quoted Allais as saying.He also clarified to the BBC that he does not perceive red warning signs as having a “bad” meaning, but rather as advice to motorists to “take care” of the items they depict.

Here's one of the other signs - put up in Egerton Road N16 pic.twitter.com/cnUcs12Xp9

“I’m glad to hear that offense wasn’t intended, though it was still an ill-conceived piece of art,” a Shomrim representative told The Jerusalem Post in response to the Guardian report.Earlier in the day, supervisor at Stamford Hill Shomrim Barry Bard said the sign has caused “a lot of concern among local Jewish residents, especially as it is in such close proximity to a synagogue.”Stamford Hill is home to Europe’s largest haredi (ultra-Orthodox) community, with an estimated 30,000 members living in the area. It has been targeted by far-right supporters in the past, and police figures show an increase of more than 60% in antisemitic incidents in London last year.Last month, the Community Security Trust, which advises Britain’s estimated 260,000 Jews on security matters, said it had recorded a record 1,309 incidents across the country in 2016, the highest number since it began collecting figures 33 years ago.