De Blasio was asked if he was concerned about a rise in support for the Boycott, Divestment and Sanctions movement “on the left.” He said the vast majority of liberal Democrats oppose the movement. 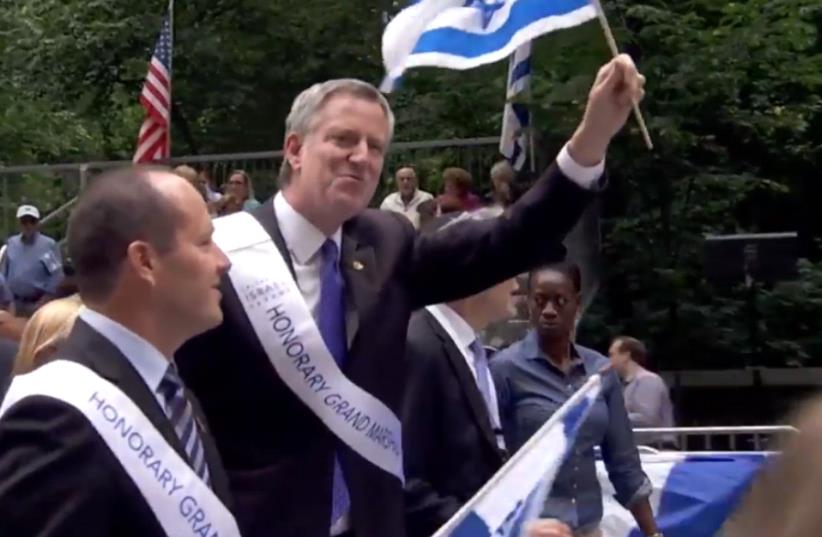 In a segment of a Bloomberg interview that was published in the Jewish Insider newsletter, De Blasio was asked if he was concerned about a rise in support for the Boycott, Divestment and Sanctions movement “on the left.” He said the vast majority of liberal Democrats oppose the movement.

Speaking of the BDS backers, he said:

I respect their First Amendment rights, but that doesn’t stop me from profoundly disagreeing with what they’re doing. Israel is a fundamentally progressive concept. It is about having a homeland for a people who’ve been oppressed for millennia and who still have to wonder if they will have safety in the rest of the world. I don’t know what could be more progressive than a homeland for oppressed people. You can disagree with Benjamin Netanyahu, but still understand why Israel matters so much in the world. So I’m happy to take on the discussion anytime, anywhere. It is about our values as Democrats and progressives. I truly believe we should stand by the State of Israel, oppose BDS, and at the same time, I’m happy to say I believe in this two-state solution and I consistently disagree with Netanyahu and I look forward to the day when he’s no longer prime minister. But that’s a healthy discussion.

De Blasio, who will leave office next year following this fall’s mayoral election, has been a leading pro-Israel voice in the progressive movement during his tenure.

The younger wave of progressive New York City lawmakers recently elected to Congress has largely staked out a pro-Israel, anti-BDS position. Rep. Ritchie Torres, whose 15th District is in the Bronx, has the backing of mainstream pro-Israel PACs for his outspoken support of Israel.

Rep. Jamaal Bowman, who upset longtime leading pro-Israel voice Eliot Engel last year in a Democratic primary, has been vocally critical of some Israeli policy under Prime Minister Benjamin Netanyahu. But he does not support the BDS movement and has spoken about his process of trying to get closer with his Jewish constituents.