The total value of the property today is estimated at 3 billion euros. 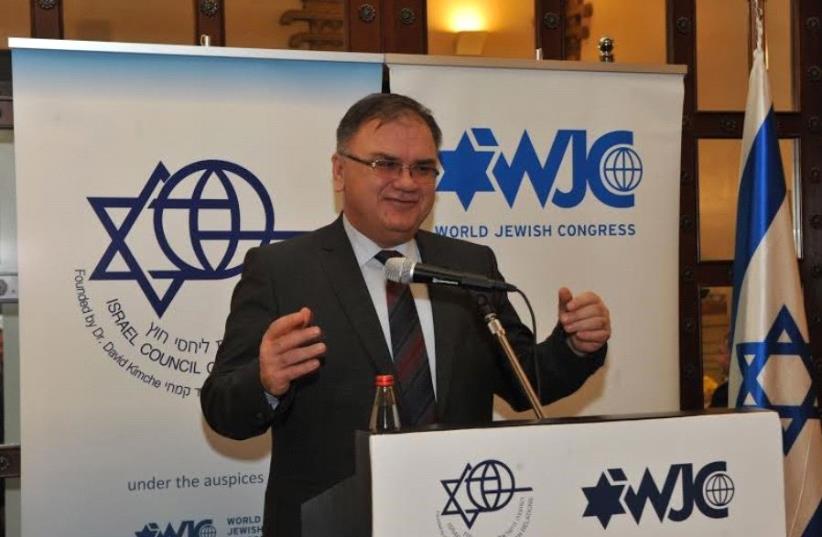 Mladen Ivanic, the chairman of the rotating presidency of Bosnia-Herzegovina, spoke to the Israel Council on Foreign Relations
(photo credit: ANDRES LACKO)
Advertisement
There is little likelihood that Bosnia will pay out compensation for community and private Jewish property confiscated during the Holocaust, Bosnia-Herzegovina President Mladen Ivanic told members of the Israel Council on Foreign Relations on Tuesday.Ivanic was responding to a question that had been previously put to him the first time he visited Israel in 2003 in the capacity of his country’s foreign minister.The person who asked about compensation said that he had asked it of other Bosnian officials, and always received a similar reply, whereas Serbia had enacted a reasonable compensation law and had followed through on it. He had been told time and again that in Bosnia, the situation was too complicated.Ivanic explained that a compensation law had been formulated, but it had been put aside because much of this property had been taken over by the communists and had later been privatized, and in several cases had been torn down and new modern buildings had replaced them.If it were up to him, said Ivanic, he would restore whatever property could be restored and pay out compensation for such property as could not be restored, but it is not his decision to make. The total value of the property today is estimated at 3 billion euros.Prior to the Q&A session, Ivanic spoke of his country’s efforts to join the European Union. It has been a slow and tedious process. After several years of stabilization, Bosnia- Herzegovina applied to join the EU and was required to answer “3,400 questions.”This was done and Bosnia-Herzegovina has indeed been recognized as a potential candidate, but Ivanic anticipates that “a few more hundred questions” will be sent before the EU makes its final decision.With the big headache that it’s causing, why would Bosnia- Herzegovina want to be part of the EU? Simply because it needs to be part of a larger family, especially when fighting terrorism and other common forms of activism, said Ivanic.Although the EU appears to be disintegrating, Ivanic doubts that it will, because there are certain member countries that need their membership in the EU in order to survive. The future of Europe is largely contingent on the outcome of upcoming elections in France, Germany and the Netherlands, he said.As for his own region, Ivanic said there’s a lot of turbulence, “but no one is seriously dealing with the Balkans.” The big players like America and China are not interested in the Balkans, “and there are no real leaders in Europe.”Although his country has stabilized and people from different ethnic groups smile at each other, they do not live together, but side by side, said Ivanic.There is still not enough trust, he said, pointing out that for true peace there is a need for both trust and compromise.Part of the difficulty in gaining the right level of trust in his country is that the different sides cannot agree on the past, because each feels itself to be the victim rather than the aggressor. For this reason, said Ivanic, it is more beneficial to speak of the future than of the past, because there can never be agreement on the past, but there may be on the future.Compromise is very challenging, he said, because your own people get angry about your concessions and don’t understand why you’ve done this.ICFR president Dan Meridor commented that the situation sounded very familiar, in fact the pattern is quite similar to that of Israel and the Palestinians.Ivanic sensed that there could not be true peace in his country, because too many people on both sides lived through the war, were wounded and lost relatives. It will be easier for the next generation, he opined. “They were born and educated during the war and they don’t know each other.”Ivanic was educated in a much earlier prewar generation during Tito’s time, “when they were talking about brotherhood and unity.”