Lady Sayeeda Warsi says citizens should be treated as foreign fighters and prosecuted upon their return to the UK. 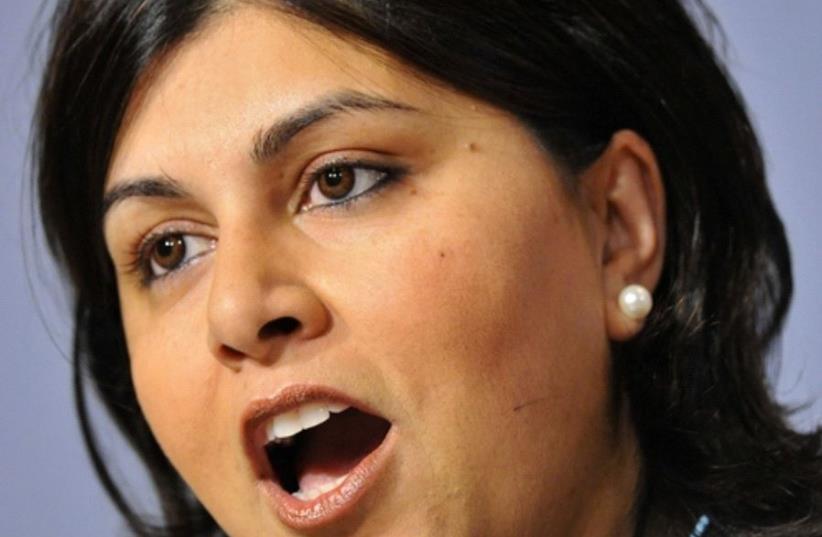 Baroness Sayeeda Warsi
(photo credit: REUTERS)
Advertisement
Britain’s first Muslim cabinet minister has called for Brits who fight with the IDF to be prosecuted upon their return.Sayeeda Warsi, a one-time Conservative Party chairwoman who resigned her cabinet post over the government policy on the 2014 Gaza war being “morally indefensible,” made the comments in an interview with Middle East Eye promoting the launch of her book The Enemy Within.

The former Foreign Office minister called on the government to close a loophole “designed to protect Israel,” which distinguishes between Brits who fight for countries like Israel and those who fight for non-state groups.According to Warsi, any British volunteer fighting with the IDF should be treated as a foreign fighter, similar to those who have gone to Syria to fight for the regime’s forces or for paramilitary or terrorist groups.“One of the questions I asked the Foreign Office was that we have a distinction between state actors and non-state actors,” she said adding that “if you go out there and fight for any group, you will be subject to prosecution when you get back.“If you go out and fight for [the Syrian Arab Republic and President Bashar] Assad, I presume, under our law, that is okay. That can’t be right.“The only reason we allow the loophole to exist is because of the IDF, because we are not brave enough to say if you hold British citizenship, you make a choice. You fight for our state only.”

At least 850 Britons have traveled to Syria to fight for Islamic State.A British citizen currently serving in the IDF told The Jerusalem Post that Warsi doesn’t understand the meaning behind those serving in the IDF.“I would risk going to jail in the UK to fight with the IDF,” he said.“Israel is part of our heritage and it is our obligation to serve. It is stupid to compare what the IDF does to the horrifying things that Islamic State does on a daily basis.”Warsi said that while current public debate regarding foreign fighters focuses exclusively on demanding loyalty from British Muslims, the same rule should apply to all.“You have to belong to something, and belonging to Britain for Muslims is a thing we talk about a lot,” she said.“We don’t talk about it in relation to other communities. We accept that other communities hold multiple identities. “Let’s just shut down this loophole. If you don’t fight for Britain, you do not fight.”Israel is guilty of war crimes committed during the 2014 war fought against Hamas, according to Warsi, and five years later, with the peace process at a stalemate and continued settlement building, “the reality on the ground is changing.”A Brit who was an IDF paratrooper told the Post that while Warsi’s comments are likely only for votes, they are narrow- minded and show how little people understand the conflict.“I fought in both Gaza and the West Bank, and to say those types of comments are to totally misunderstand the nuances of the conflict here.“These are dangerous and polarizing comments made solely for the headlines.”This would not be the first time that a UK politician has suggested that citizens serving with the IDF be prosecuted for alleged crimes committed against Palestinians.In 2014 Easington MP Grahame Morris asked thenprime minister David Cameron whether or not British citizens in the IDF should be treated like those who return from fighting with terrorist groups in Syria and Iraq, “given the strong evidence of Israeli war crimes in Gaza” In response, Cameron said the Gaza war was “started by Hamas rockets raining down on Israel, and Israel has a right to defend itself.“I think that the Hon. Gentleman, when he looks at his words, will come to regret drawing a comparison between a soldier fighting in the Israel defense forces and a terrorist returning from Syria.”
Advertisement
Subscribe for our daily newsletter