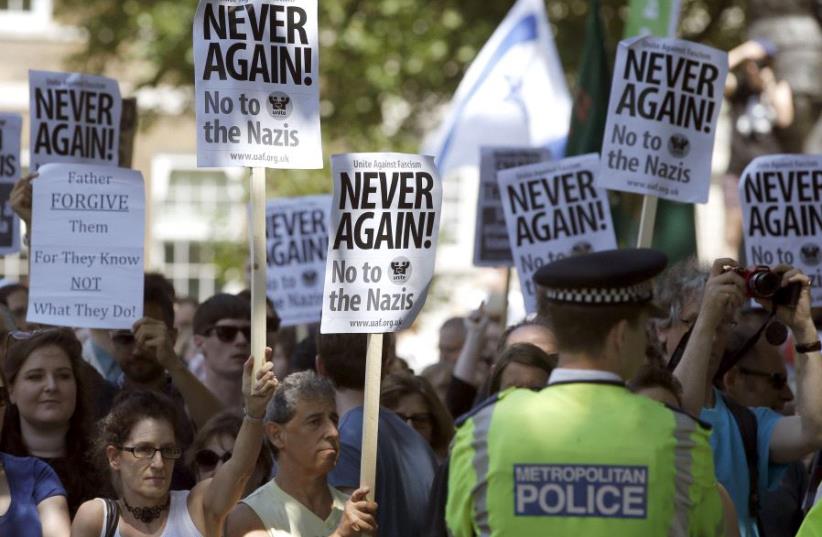 People of multiple faiths hold a counter-protest to an anti-Shomrim protest that was held to demonstrate against Britain's Jewish community in Westminster, London, Britain, July 4, 2015
(photo credit: REUTERS/PETER NICHOLLS)
Advertisement
A Jewish family was reportedly pelted with stones by a group of youths shouting “Jews” at the Kent seaside in England over the bank holiday weekend, according to Jewish neighborhood watch group Shomrim.The parents and their five children, aged between eight and 15, were playing at Minster Beach on the Isle of Sheppey on Sunday afternoon when the incident occurred.The family from London’s Stamford Hill area – home to Europe’s largest haredi (ultra-Orthodox) community – cut their vacation short out of fear for their safety, Shomrim said in a series of Twitter posts.


The volunteer group said it was providing support to the family and accused Kent Police of failing to dispatch officers to the scene at the time of the incident. Kent Police responded that during the victims’ phone call to the police, the informant and suspects left the scene and officers determined that there was no further risk.“As the informant is from outside of the county, police are arranging a suitable time to speak to the informant in due course,” a police representative tweeted in response.