Over 40 film-makers and artist want cinemas to drop screenings of Israeli films due to Israeli governmental policy in the West Bank. 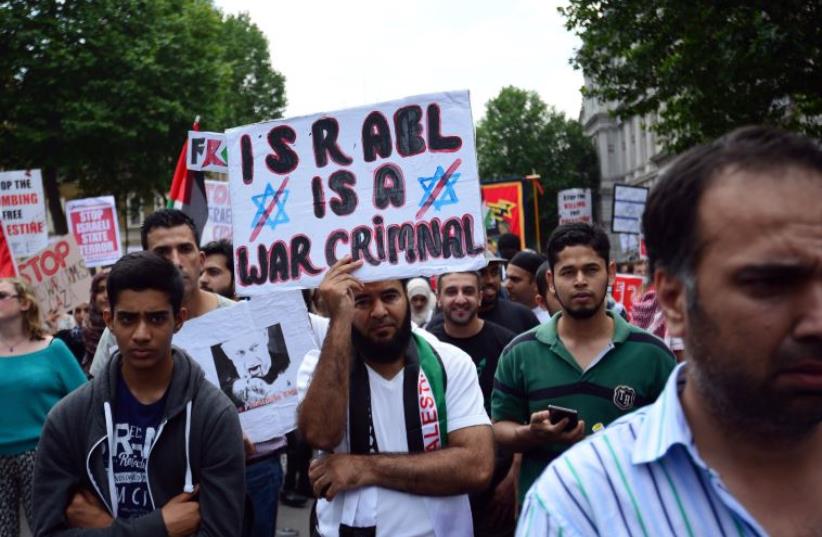 Protesters in London display placards and banners as they take part in demonstration against Israel [File]
(photo credit: CARL COURT/AFP)
Advertisement
British film-makers demanded in a letter published by The Guardian Monday that cinema chains across the United Kingdom drop screenings for an Israeli film festival scheduled to open this week.Seret 2015, the London-Israeli film and television festival, is due to open with a gala screening at the Bafta cinema on Thursday. Screenings are also slated at cinemas including Curzon Soho and Odeon Swiss Cottage in London, according to The Guardian.Over forty artist and film-makers conveyed their disappointment in a letter sent to The Guardian, stating, “By hosting (the festival), these cinemas are ignoring the 2004 call by Palestinian civil society for sanctions against Israel until Israel abides by international law and ends its illegal displacement of Palestinians, discrimination against them, and occupation of their land.”The letter goes on to say that because the films are funded by the Israeli government via its London embassy, the cinemas are tacitly complacent in Israeli government policy.“By benefiting from money from the Israeli state, the cinemas become silent accomplices to the violence inflicted on the Palestinian people, the letter states, adding, "Such collaboration and co-operation is unacceptable. It normalizes, even if unintentionally, the Israeli government’s violent, systematic and illegal oppression of the Palestinians.”The letter iterates that its intention is not to drown out the voices of individual filmmakers but "to reject the involvement and financial support of the Israeli state.” In response to the letter, the founders of the festival, Anat Koren, Odelia Haroush and Patty Hochmann, said the Curzon group had a well-deserved reputation for showing the best of world cinema and they were delighted films from Israel were included in that category, The Guardian added.The statement went on to read that “Our festival is a showcase for the many voices throughout Israel, including Arab Israelis and Palestinians, as well as religious and secular groups. These are highly talented film-makers and actors, working together successfully, to provide entertainment and insight for film and television lovers internationally." In response to the protestors' considerations, Curzon cinemas released a statement which said: “Curzon Cinemas hosts many festivals throughout the year, including the Human Rights Watch film festival, the London film festival and festivals representing regions from around the world including the Kinoteka Polish film festival, the Romanian film festival and many more.""We have not previously considered asking questions about the funding of a festival booked at one of our cinemas, and we do not consider booking a festival as any kind of political comment,” it read.The letter is resonant of the row over the UK Jewish film festival which the Tricycle Theatre in north London refused to host last year. The Tricycle later changed its mind, although not in time to screen the films for 2014, according to The Guardian.