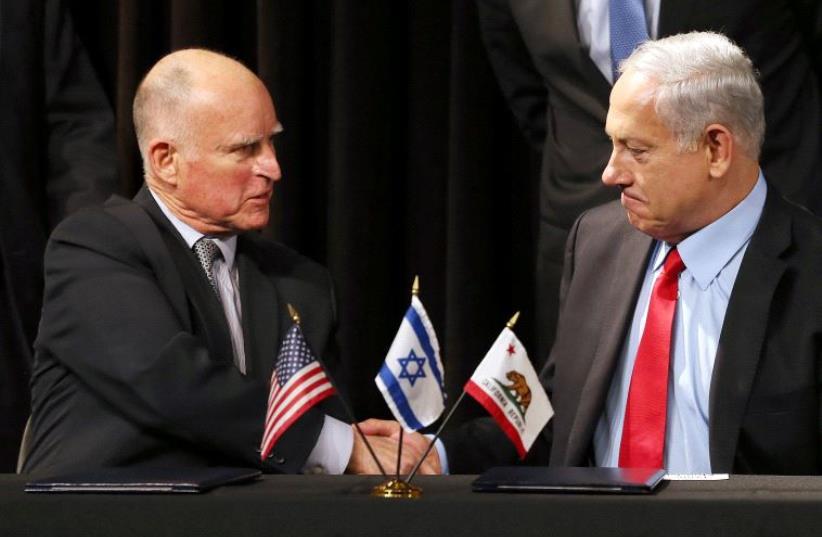 California governor Jerry Brown (L) and Israeli prime minister Benjamin Netanyahu (R) shake hands in 2014 after signing a pact to strengthen economic and research ties between California and Israel
(photo credit: JUSTIN SULLIVAN/GETTY IMAGES NORTH AMERICA/AFP)
Advertisement
California Gov. Jerry Brown signed into law a measure that prevents companies that boycott or discriminate against any sovereign state, including Israel, from doing business with the state.Brown signed Assembly Bill 2844 on Saturday afternoon. The State Senate approved the bill by a vote of 34 to 1 on August 24, and the State Assembly passed it by 69 to 1 on August 30.An earlier version of the legislation banned the state from making contracts worth over $100,000 with companies boycotting Israel. In order to satisfy critics, who said it violated the constitutional right to boycott, the bill was modified to include reference to other countries.The passed version does not prohibit companies working with the state from boycotting Israel. Rather, companies have to certify that they do not violate California civil rights laws in boycotting a foreign country – including Israel, the only country mentioned by name – according to The Jewish Journal.“We commend Governor Brown for signing this bill,” said Janna Weinstein Smith, American Jewish Committee’s Los Angeles Regional Director, in a statement. “The bill sends the clear and unmistakable message that the state of California wants no part of the goals and tactics of the BDS movement. Thanks to this legislation, those who wish to target Jews and Israelis for discrimination will not be doing business with the state of California.”The Israeli-American Coalition for Action in a statement also praised the legislation, and praised the leadership of Assembly member Richard Bloom, who introduced the original bill; the California Legislative Jewish Caucus; and Assembly member Travis Allen, in passing the bill.