The California Combating BDS Act of 2016 was "overwhelmingly passed" by a vote of 60-0 in the state Assembly. 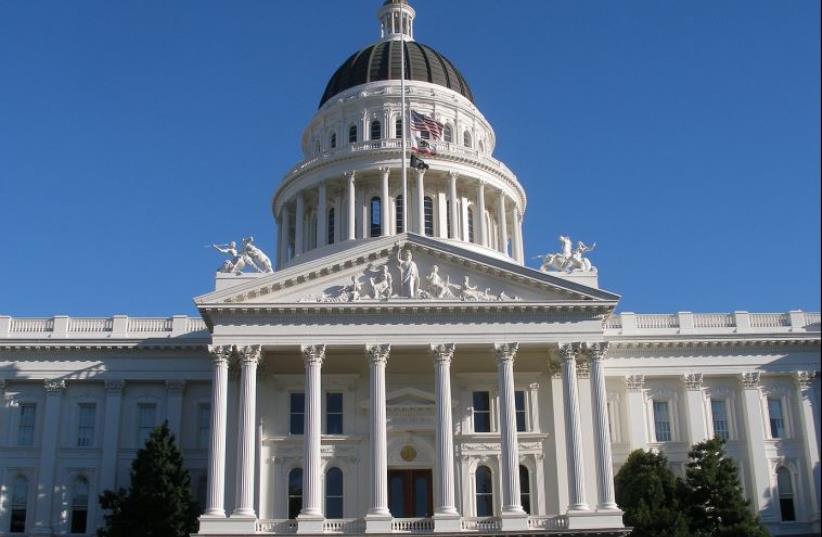 California state legislature ‏
(photo credit: Wikimedia Commons)
Advertisement
The State of California dealt another blow to the Boycott, Divestment and Sanctions (BDS) Movement  Wednesday following the passage of a bill aimed at hampering businesses from participating in "discriminatory boycotts" against Israel, according to weekly publication The California Combating BDS Act of 2016, also known as Assembly Bill 2844, was "overwhelmingly passed" by a vote of 60-0 in the state Assembly, which is now expected to be signed into law by Governor Jerry Brown in the coming weeks. “It’s been a long journey...but with a smile on my face I can say today that Republicans and Democrats in the legislature have taken a historic step forward in the fight against prejudice,” Travis Allen (R- Hunnington Beach), a co-sponsor of the legislation, said while speaking on the Assembly floor after the vote.  But critics note that much of the bill's original language had been removed throughout the state's lengthy legislative process, leaving the law mostly symbolic and feckless. The bill's original proposal, for instance, sought to ban state contractors of more than $100,000 for companies that boycott the Jewish state, according to The Journal. Opponents in California's state legislature, however, quickly raised objections, arguing that the law potentially violated constitutionally protected freedoms such as free speech and boycott rights.As a result, the law no longer seeks punitive measures against contractors who partake in boycott efforts against Israel. Instead, the law now merely states that contractors are forbidden from violating current state civil rights laws in the course of boycotting a sovereign nation recognized by the United States. “Those standards already apply,” said Sen. Bill Monning (D-Carmel), who was the only legislator to vote against the bill when it was brought to a vote in the State Senate on August 24. “So we have a bill on the floor that seeks to affirm laws that already exist and people are held accountable for already.”Despite the bill's modifications, proponents heralded the California Assembly's vote, saying it was the right step forward in the fight against the BDS Movement.   “We have another tool in our toolbox,” Shawn Evenhaim, chairman of the Israeli-American Coalition for Action (IAX), one of the organizations leading the fight for AB 2844, told The Journal. “We’re not just going to frame it and hang it. It’s a much longer fight and a much longer process,” he added.Dean Schramm, Los Angeles chairman of the American Jewish Committee (AJC), also said the legislation was an important win. “Oftentimes, if not all the time, when there’s an entity boycotting the State of Israel, at the core, it’s anti-Semitism,” he said.
Nearly a dozen states have passed legislation restricting government employed contractors from supporting boycotts against Israel, with another 11 states considering similar bills across the country.
Advertisement
Subscribe for our daily newsletter