The Canadian premier got in hot water over the text on a plaque commemorating the Holocaust that made no mention of Jews whatsoever. 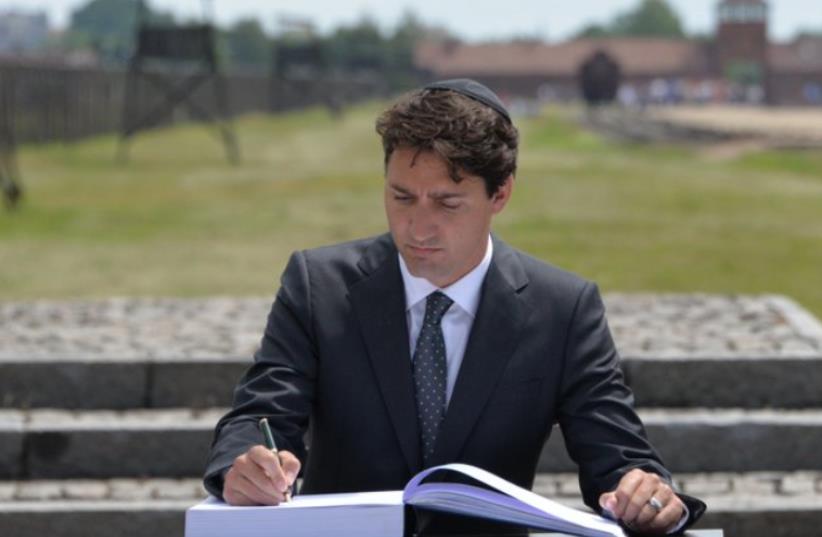 Canadian PM Justin Trudeau visits Auschwitz
(photo credit: AUSCHWITZ MEMORIAL TWITTER)
Advertisement
Canadian Prime Minister Justin Trudeau paid tribute to the 6 million victims of the Holocaust that were persecuted and murdered by the Nazis during World War II by erecting Canada's National Holocaust Monument and unveiling it to the public last week. However, something important was amiss with this new monument- it failed to mention antisemitism, let alone the Jewish people. "The National Holocaust Monument commemorates millions of men, women, and children murdered during the Holocaust and honors the survivors who persevered and were able to make their way to Canada after one of the darkest chapters in history," the plaque reads.
Canadian Prime Minister Justin Trudeau says antisemitism present in Canada during National Holocaust Monument unveiling, September 27, 2017 (YouTube/Why?)
"The monument recognizes the contribution those survivors have made to Canada and serves as a reminder that we must be vigilant in standing guard against hate, intolerance, and discrimination." Despite the respectful words, Trudeau's critics were quick to catch on this week that pivotal parts were missing from the text on the plaque and attacked the Canadian premier for not getting his facts straight. David Sweet, a Conservative opposition member, reproached Canadian Heritage Minister Melanie Joly in a parliament discussion on Tuesday, saying: "If we're going to stamp out hatred towards Jews, it's important to get history right."According to The Forward, Sweet continued to charge, asking Joly: "How could the prime minister permit such a glaring omission of reference to antisemitism and the fact that the millions of men, women and children who were murdered were overwhelmingly Jewish?" Joly answered that the plaque had been removed and that it was intended to replace it "with language that reflects the horrors experienced by the Jewish people." This is not the first time Trudeau evokes the ire of the critics over his approach to the memory of the Holocaust. Last year during International Holocaust Remembrance Day the Canadian prime minister released a statement that did not specifically mention Jews as the direct victims of the systematic genocide executed by the Nazi regime. His statement sought to pay "tribute to the memory of the millions of victims murdered during the Holocaust. We honor those who survived atrocities at the hands of the Nazi regime, and welcome their courageous stories of hope and perseverance." After Jewish groups attacked the prime minister for omitting mention of Jewish victims, the Toronto Sun reported that Trudeau's statement was a draft released prematurely. Trudeau's office later released a tweet linking to the full statement and wrote about the importance of combating antisemitism in a tweet that read: "On this #HolocaustMemorialDay, we honor its victims & vow to fight intolerance and anti-Semitism."