19 new emissary couples to be based on campuses across the US. 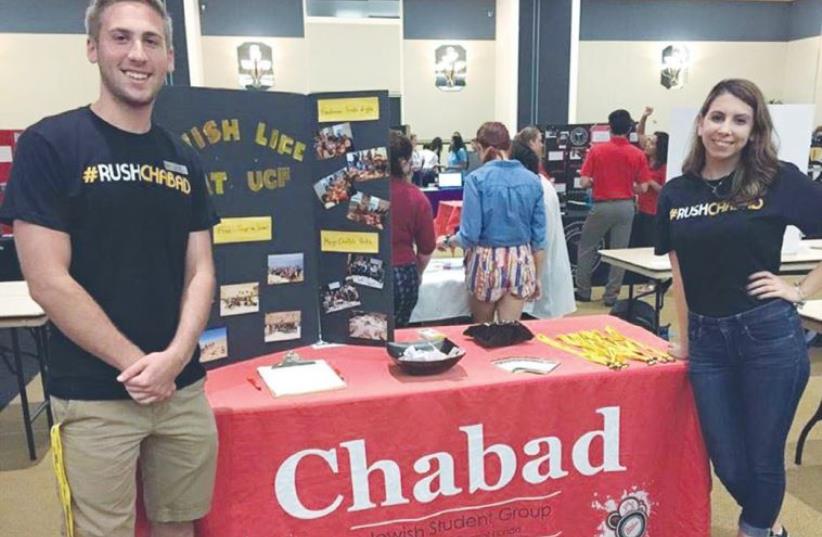 JEWISH STUDENTS man the Chabad table at the University of Central Florida recently. (
(photo credit: CHABAD.ORG)
Advertisement
The Chabad hassidic group’s campus outreach arm is expanding its operations in response to growing anti-Semitism at American universities, the group said in a statement announcing the assignment of 19 new emissary couples on Wednesday.Chabad, which is known for its emphasis on outreach to non-religious Jews, has long had a large campus presence, but in recent years it has expanded its mission to include Israel advocacy.“Despite – or because of – rising anti-Semitism and anti-Israel sentiment at colleges and universities, 19 young Chabad couples are opening Jewish centers on campuses for students and faculty. With 230 centers, Chabad has the largest network of full-time professionally staffed Jewish campus centers in the world,” a spokesman told The Jerusalem Post.This fall it will send out the 19 young couples to establish operations “at universities across the country, including the University of South Carolina, Louisiana State University, the University of Utah, Tulane University, Caltech and the University of Alabama,” according to the statement.“The young couples, a new generation of social media-savvy Shluchim [emissaries], will follow the Chabad on Campus model of creating a ‘home away from home,’ while providing an array of social, educational and spiritual programs for students, faculty and community members,” it said.Rabbi Hershy and Sheva Stolik, who run the Chabad house at Caltech, said they see themselves as “here to service Jews and Judaism…to help Jews flourish and make Judaism flourish.”“We want every student to be aware that it is with our means to make this world a better place,” explained Rabbi Isser and Mushka Kluwgant, who recently arrived at Pierce.Although Chabad is relatively Zionist for an ultra-Orthodox movement, it is generally not thought of as being involved overtly in Israel activism. Yossi Witkes, who runs Israel trips for the movement, however, recently told the Post that he doesn’t see the program as representing a major shift from the movement’s traditional approach.“Israel is definitely a good place to experience Judaism,” he said, adding that efforts to delegitimize the Jewish state on Diaspora college campuses have impacted how students perceive their Jewish identity and that bringing them to Israel “helps them be proud and active Jews and representatives of Israel.”“Chabad on Campus has become a staple, woven into the fabric of campus life for Jews from all backgrounds and affiliations,” said Rabbi Yossy Gordon, executive vice president of Chabad on Campus International.“College is a transitional time in a student’s development, and it is often the period when one’s values, goals and identity begin to solidify. It is essential that Jewish students have access to experiencing and learning about the richness of Judaism so that their Jewish identity will be able to flourish as well.”Many Jewish students have reported feeling insecure on college campuses due to anti-Israel activities. A coalition of Jewish organizations recently petitioned the University of California to accept the State Department’s definition of anti-Semitism, which includes the demonization of Israel.“As you know, campus debate on Israel is increasingly slipping into anti-Semitism,” the coalition asserted earlier this month in a letter, citing several recent events that had garnered the Jewish community’s attention as proof.Among these were incidents in which the graffito “Zionists should be sent to the gas chamber” was found written on a bathroom wall at UC Berkeley, a Jew applying for a student union position found her suitability questioned on the basis of her religion, and swastikas were painted on a Jewish fraternity house at UC Davis.Despite widespread worries, however, a recent study indicated that the impact of the boycott divestment and sanctions on campuses may be much more limited than commonly believed.According to the Israel on Campus Coalition, “While there was a significant increase in campus BDS campaigns this academic year, the rate at which BDS campaigns were defeated on campuses nationwide remained relatively static.”In its report, the group stated that pro-Israel students are fighting back and “forming coalitions to educate the broader campus community, and working to build support for Israel on campus.” They are also speaking out against divestment, opposing anti-Israel student government resolutions, defeating campus-wide divestment referendums, and blocking efforts to boycott Israeli products.There was an increase in activity by both Israel’s supporters and detractors on campuses US-wide during the 2014-2015 academic year, according to the report.During this period the ICC tracked 1,630 anti-Israel events at 181 colleges and universities across the US, and more than twice that number – 3,753 – of pro-Israel events at 213 schools.Much of the anti-Israel activity followed last year’s military conflict in the Gaza Strip.