The RT report referred to recent reports in Arab and Muslim media which claimed that a West Bank rabbi issued an “advisory opinion” allowing Jewish settlers to poison Palestinian water. 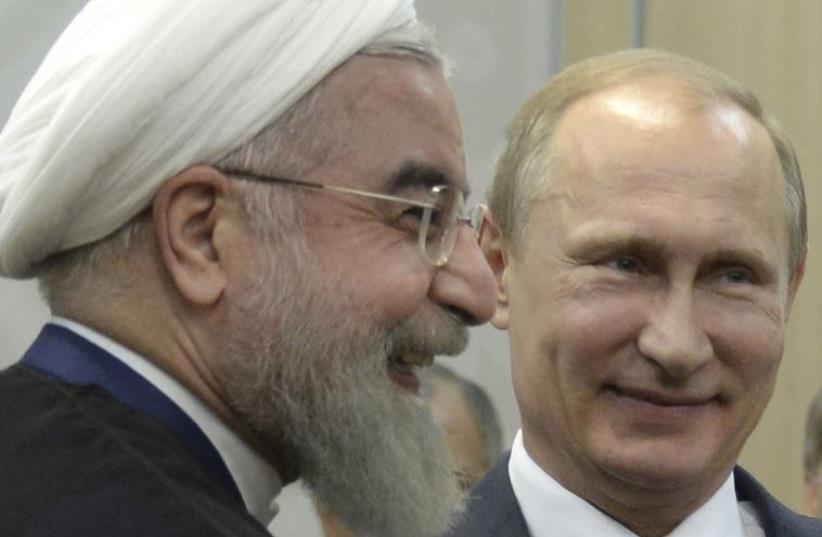 President Vladimir Putin (R) meets with Iran's President Hassan Rouhani in Ufa, Russia
(photo credit: REUTERS)
Advertisement
A Chabad-Lubavitch leader condemned a state-funded channel’s airing of Palestinian allegations that an Israeli rabbi approved the poisoning of Palestinian wells.Rabbi Alexander Boroda, president of the Federation of Jewish Communities of Russia, said the RT network’s June 27 report on the issue repeated unfounded allegations reminiscent of the medieval “blood libel” against Jews.The RT report referred to recent reports in Arab and Muslim media which claimed that a West Bank rabbi issued an “advisory opinion” allowing Jewish settlers to poison Palestinian water. A version of the story previously appeared in the state-run Turkish press agency Anadolu, credited to a Palestinian reporter in Ramallah. Neither the rabbi in the story nor the organization he is described as representing appears to exist.The report came a week after Palestinian Authority President Mahmoud Abbas repeated the unfounded allegations at the European Parliament. Abbas later acknowledged that the charges were “baseless.”In medieval Europe, Jews were often accused of poisoning wells to spread disease among Christians. This recurrent theme led to several major pogroms against Jews.“It is surprising that the modern Russian television channel produces similar plots,” Boroda was quoted as saying in a statement Friday on the news site Jewish.Ru. These blood libels, he added, “were the product of a sick imagination” and led to brutal violence.“In this case we are talking a falsification which has already been refuted,” added Boroda, who also noted Abbas’ office had apologized for his remarks. The report on RT, Boroda said, “is not an unfortunate exception, but rather the rule.” The channel, he said, “regularly features stories about the alleged persecution of Arabs by Jews – attacks and house demolitions without reporting these are the houses of terrorists who kill civilians.”Boroda’s organization, which has more than 100 offices throughout Russia, has been criticized in the past for its leaders’ close relationship of Russian President Vladimir Putin, who is accused in the West of encouraging xenophobia and homophobia and violating international law.But the federation has countered such claims by maintaining its role is to represent the Jewish community, whose tolerant treatment under Putin has allowed Chabad to open dozens of synagogues and Jewish community centers. The federation’s leaders insisted they consistently speak out against anti-Semitism, including by officials from Putin’s own party and government offices, as they occur.Media items like the RT report, Boroda also said, “are extremely harmful for Russia, because every such report becomes a contribution to the arsenal of her opponents, claiming that the situation in the field of minority rights and the attitude towards them in the country has worsened.”