Tottenham, located in North London Borough of Haringey, has a large contingent of Jewish fans and has faced anti-Semitic harassment in the past. 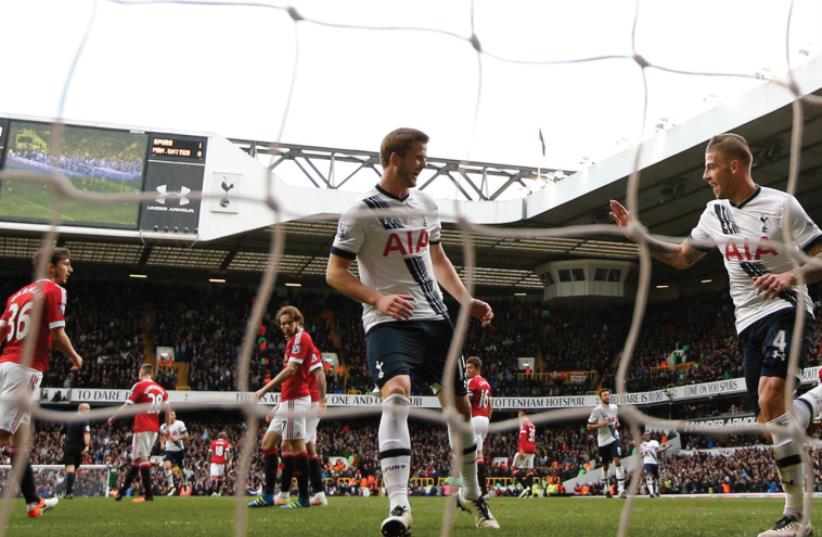 TOBY ALDERWEIRELD celebrates with Eric Dier after scoring the second goal for Tottenham.
(photo credit: REUTERS)
Advertisement
Famed English soccer club Chelsea has warned its fans not to engage in any anti-Semitic or discriminatory behavior following a complaint about bigoted messages on social media, The Jewish Chronicle reported Friday.The issue was brought to the attention of senior officials within Chelsea after at least one fan reportedly witnessed anti-Semitic posts on Facebook, prompting the club to release a statement asking fans to behave in "a passionate but respectful manner."“We utterly condemn discriminatory behavior and the club will continue to challenge all forms of discrimination,” the statement added.Tottenham, located in North London Borough of Haringey, has a large contingent of Jewish fans and has faced anti-Semitic harassment in the past. For instance, in November of 2012 a brutal attack on fans of the soccer club in Rome left one man in serious condition after masked men armed with knives and baseball bats shouted "Jews, Jews" as they laid siege to a pub where the Tottenham supporters were drinking in a district popular in the Italian capital. In response to the harassment, both Jewish and non-Jewish supporters of Tottenham refer to themselves as "Yids," a derogatory term for Jewish people, or the "Yid Army" with the team even defending supporters' use of the phrase.  “Our fans adopted the chant as a defense mechanism in order to own the term and thereby deflect anti-Semitic abuse,” the team said in 2013. “They do not use the term to others to cause any offense."However the term is often used by other soccer teams to describe Spurs fans in a derogatory way.In 2013, the governing body of English soccer announced that they would pursue criminal charges against anyone for using the term “Yid.”Tottenham and Chelsea are scheduled to meet in an important Premier League match this Monday evening. Reuters contributed to this article.