American businessman Daniel Sunray completed a six-year sentence for sexual abuse of six children between 1998 and 1999. 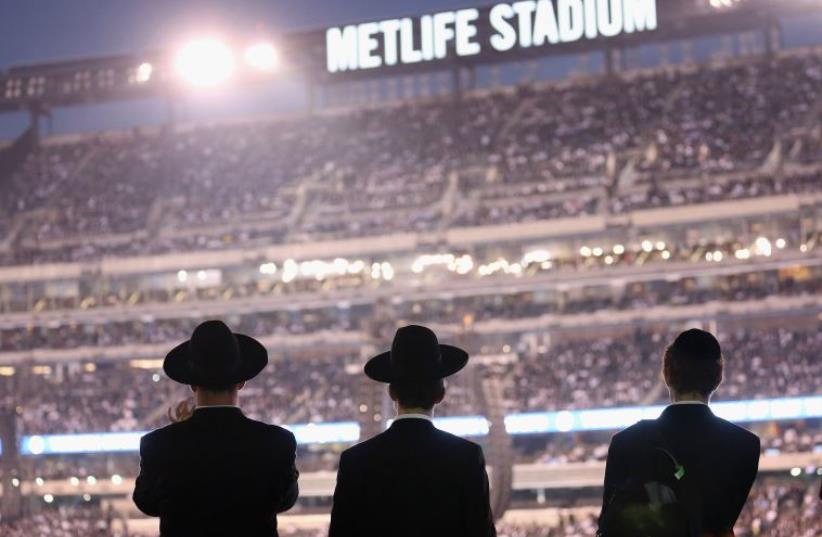 Orthodox Jews gather to celebrate the completion of study of the entire Talmud religious text in East Rutherford, New Jersey
(photo credit: AFP PHOTO)
Advertisement
A US-based Jewish advocacy group working to combat child sex abuse within the Orthodox community is in a legal battle with a convicted pedophile about whom the group warned the local community.In June 2016, the Jewish Community Watch, known for its “wall of shame,” shared information about the release of American businessman Daniel Sunray from an Israeli prison, where he had completed a six-year sentence for sexual abuse of six children between 1998 and 1999.In April 2017, the group alerted the Jewish community in New York City that Sunray had moved there.“We shared this information to warn the community about a man who poses a potentially serious risk to children,” the group said in a press release sent to The Jerusalem Post this week.A few months ago, the group received a notice summoning its leaders to appear in front of Rabbi Yisroel Arye Knopfler’s Badatz Beit Din (rabbinical court) of Lakewood, New Jersey. According to the note, Sunray was suing Jewish Community Watch for Lashon Hara (derogatory or harmful speech).“We are being sued for warning the community that a convicted sex offender, with a history of grooming children in shuls and offering children rides, had anonymously moved into their area,” said Meyer Seewald, founder and director of Jewish Community Watch.Sunray has the support of Rabbi Asher Weiss, a respected rabbi in Israel, who wrote a letter addressed to members of the Orthodox Union in which he stated that Sunray is a “wonderful and precious Jew” and should be accepted into all synagogues and communities.With reference to Sunray’s conviction, Weiss said: “I personally believe that he was innocent, and even if was not, he paid a bitter price, and repented for his sins.”“He is able to fulfill any role, being a kashrus supervisor....you should bring him close and encourage him you must not shy him away or hurt him,” he said.Seewald argued that while a convicted offender has every right to return to the community, the community has every right to be warned of the danger.The Jewish Community Watch rejected the summons to Knopfler’s Beit Din, on the grounds that it is considered fringe and has been denied legitimacy by some Lakewood rabbis. The group said it offered to go to another Beit Din but Sunray refused.“The brazen and shameless behavior of Sunray, who has refused to accept any responsibility for his crimes or to register with the local sex offender registry as required, (along with his efforts to silence anyone who makes his past known), gives us even more reason to be concerned about the danger he may present,” Seewald said. “We are therefore once again warning the community that Sunray is currently living in Harrison, NY, and spends many Shabbosim in Stamford, CT.”