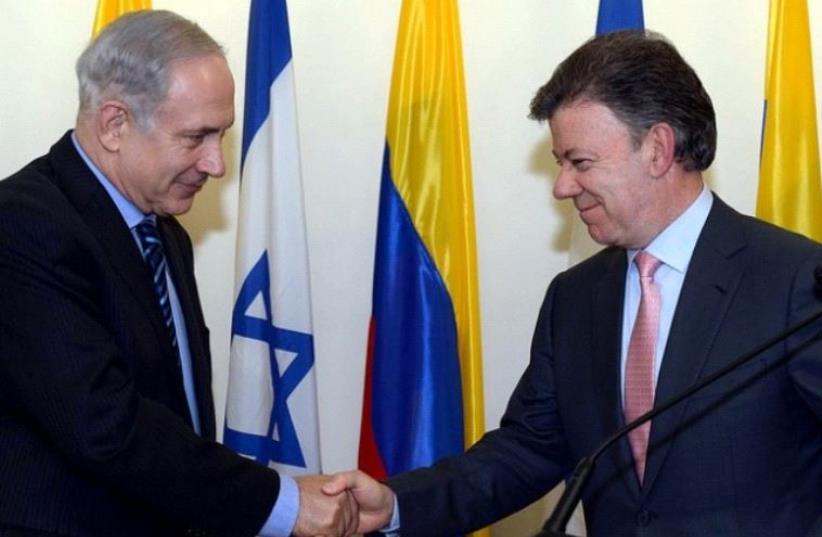 Prime Minister Benjamin Netanyahu and Colombian President Juan Manuel Santos Calderon in Jerusalem, June 2013
(photo credit: GPO)
Advertisement
In diplomacy it is not only important for two states to have good relations, but for each state to feel it is important to the other, Marcos Peckel, a leader of Colombia’s small Jewish community, said on Wednesday explaining why Prime Minister Benjamin Netanyahu needs to visit South America.No sitting Israeli prime Minister has ever been to Latin America. Netanyahu told a World Jewish Congress delegation earlier this week – a delegation Peckel was part of – that there was a possibility of a trip to Argentina next year.If he goes to Argentina, which since the election of Prime Minister Mauricio Macri last year has become friendlier toward Israel, then he would also likely travel to Colombia, Israel’s strongest ally in South America.A visit by Netanyahu to Colombia would send a message of the importance Israel places on the relationship, Peckel said. “A visit by a prime minister is always important. If he can go to India, China and Japan, he can come to Latin America, too.”The failure of any Israeli prime minister to visit Latin America is due to negligence, said Peckel, who lectures on international affairs and the Middle East at two universities in Colombia, as well as at the Colombian Foreign Ministry’s academy for diplomats.“There were other priorities.”Netanyahu planned a trip to Mexico, Panama and Colombia in 2014, but that was scuttled by work sanctions in the Foreign Ministry.Peckel said that it is also important for Israel to at long last appoint an ambassador to Brazil, a position that has been vacant now for more than a year since Brasilia, under the now impeached Dilma Rousseff, nixed former settlement leader Dani Dayan as envoy.Dayan has since moved on to become consul-general in New York, there is a new president in Brazil, and the time has come to fill the ambassadorial position, Peckel said. “This is a very abnormal situation,” he said. “Brazil is a very important country. Countries need to have ambassadors in each other’s capitals.”One senior diplomatic official said that Israel would likely name an ambassador with a matter of weeks.Regarding the pact signed last month between the Colombian government and the Marxist-Leninist FARC guerrillas putting an end to more than half a century of war, Peckel said that while the umbrella Jewish organization he heads – the Confederacion de Comunidades Judias de Colombia – supported the agreement, there are some inside the 5,000-strong Jewish community concerned that giving FARC political power, even if only a small amount, could eventually put the country on a trajectory similar to that of Venezuela under Hugo Chavez.Peckel said, however, that since FARC will only have 10 seats out of 267 in both houses of parliament, “I don’t see any signs pointing to that.”The Left in South America, he added, has learned a lesson from the Venezuelan example.Some in the Jewish community, he said, objected to the deal out of philosophical reasons, believing that people in FARC – whom they deem to be criminals – are being “rewarded handsomely” without having to pay with jail terms.If FARC eventually gains more political power at the ballot box, it could have an impact on the current close relations with Israel, Peckel said, adding that this scenario is not likely in the short term, and that no one really knows how much support FARC will get at the polls.Israel and Colombia enjoy close security cooperation, and Peckel said that he does not see that changing with the peace accord. He said Colombia has learned from other countries – such as Guatemala and El Salvador – where accords were signed with rebels. In each of those two countries, he noted, the crime rate shot up after accords were signed because as a result of the agreements, the police and security apparatuses were significantly downsized.