“Black activists have raised the call for an end to violence, not an escalation of it,” Black Lives Matter leaders said in a statement one day after the Dallas killings. 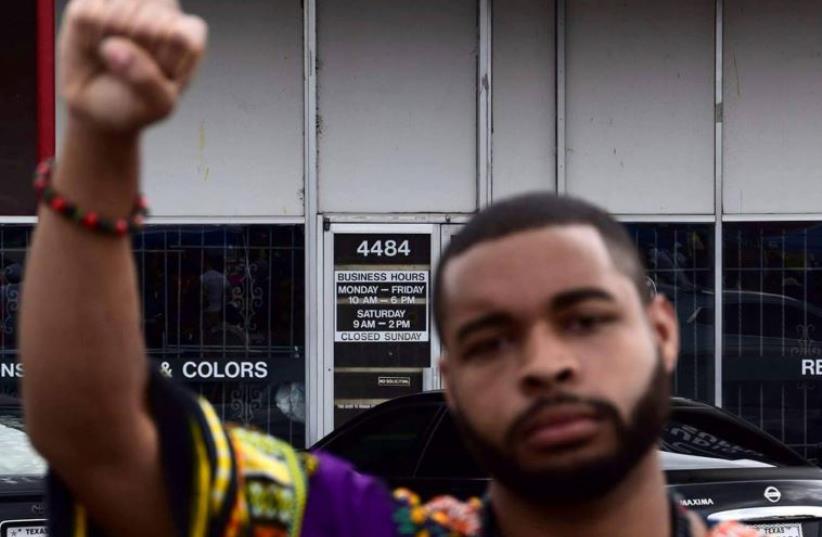 Micah Xavier Johnson, a man suspected by Dallas Police in a shooting attack and who was killed during a manhunt, is seen in an undated photo from his Facebook account
(photo credit: REUTERS)
Advertisement
Investigators may never know with certainty what combination of factors led Micah Xavier Johnson to methodically fire upon police officers in Dallas. Five white officers were killed in the attack, which came during a peaceful rally protesting the shooting deaths of young black men by law enforcement in other cities.Johnson has been variously portrayed as a follower of the Black Lives Matter movement who was pushed to the edge by recent police shootings; a loner who not only was unaffiliated with various black nationalists organizations but was even shunned by them, and a disgruntled veteran who left the military under a cloud of suspicion for sexual harassment.Reports now say he was linked as well to several black power and other confrontational groups, some of which are labeled as anti-Semitic.According to local reports, Johnson was a member of the New Black Panther Party’s Houston chapter for about six months a few years ago. He “liked” the group on Facebook and, according to The Daily Beast, he attended multiple NBPP protests and events.The Southern Poverty Law Center calls the NBPP, which is not connected to the original Black Panther Party, a “virulently racist and anti-Semitic organization whose leaders have encouraged violence against whites, Jews and law enforcement officers.” The Anti-Defamation League says it is the “largest organized anti-Semitic and racist Black militant group in America.”The Daily Beast also reported that Johnson was “loosely affiliated” with several other groups, including South Dallas’ Muhammad Mosque No. 48, which is run by members of Louis Farrakhan’s Nation of Islam — which both the Southern Poverty Law Center and ADL labeled an anti-Semitic hate group. He had also liked Facebook pages related to Elijah Muhammad, an early Nation of Islam leader.Here’s a quick primer on the New Black Panther Party, which is easy to confuse (in name only) with its 1960s namesake.The original Black Panther Party doesn’t like the new group.The Black Panther Party, formed in the 1960s to promote black nationalism, has said the NBPP has “hijacked our name and … our history.” In fact, in 1997 the now-defunct Black Panther Party won an injunction against the NBPP that prohibits the group from using the Black Panther name. It continues to use it anyway.While the group is “tiny” compared to its non-related predecessor, the ADL notes that it has successfully recruited members and garnered significant media coverage in the past.The Black Panther Party likely objects to the NBPP’s direct calls to kill, like the ones issued in the wake of the deaths of Trayvon Martin and Michael Brown. After Martin was killed by George Zimmerman in 2012, the group issued a $10,000 reward for Zimmerman’s “capture.” When Brown was fatally shot in 2014 by a police officer, Darren Wilson, in Ferguson, Missouri, the group’s then-leader, Malik Zulu Shabazz, directed protesters to chant that they wanted Wilson dead.

New Black Panther Party critiques of white power often turn into anti-Semitism.The NBPP’s main ideology focuses on wresting power back from whites in general. But as the ADL explains, the group’s positions are tainted by racism and frequently anti-Semitism.“Members of the group have blamed the Jews for killing Jesus; claimed that the Talmud teaches that ‘Black people are cursed,’ and promoted the anti-Semitic notion that Jews were ‘significantly and substantially’ involved in the transatlantic slave trade,” the ADL’s 2014 report on the group reads.It blamed Jews for 9/11.A month after the terrorist attack, at a news conference that was broadcast on C-SPAN, Shabazz blamed “Zionism” and NBPP officer Amir Muhammad said thousands of Jews knew about the attack in advance.Zionism also features prominently in the group’s 10-point platform as a symbol of “robbery of the Black by the capitalist.” According to the ADL, the NBPP’s former Boston chairman released a song in 2009 called “Zionist Money” that likens Zionism to terrorism. In 2002, Shabazz led chants of “death to Israel” outside the B’nai B’rith building in Washington, D.C.The Black Lives Matter Network, a grassroots movement that sprang up in reaction to a string of shooting deaths of young black men by police, bristles at the notion that Johnson or fringe groups like the NBPP in any way share their goals or ideology.“Black activists have raised the call for an end to violence, not an escalation of it,” Black Lives Matter leaders said in a statement one day after the Dallas killings. “Yesterday’s attack was the result of the actions of a lone gunman. To assign the actions of one person to an entire movement is dangerous and irresponsible. We continue our efforts to bring about a better world for all of us.”