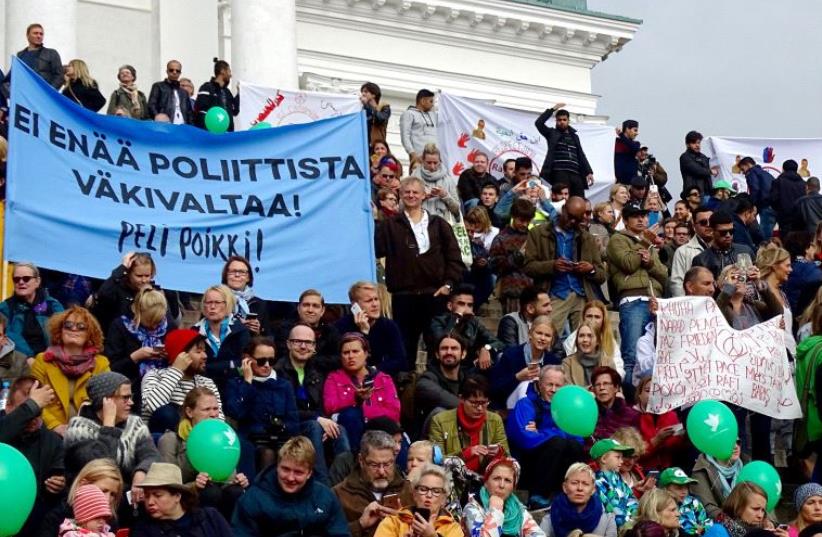 Protesters take part in a demonstration against racism and far right movements in downtown Helsinki, Finland, September 24, 2016
(photo credit: REUTERS)
Advertisement
HELSINKI - More than 15,000 people gathered in Helsinki on Saturday to protest against racism and violence, after the death of a man assaulted during a neo-Nazi rally in the city earlier this month.Following an influx of asylum seekers last year, anti-immigration sentiment has been on the rise in the small Nordic country, which has little experience of taking in large numbers of refugees.Police a week ago detained a member of a far-right movement on suspicion of attacking a Finnish national in central Helsinki who died of his injuries a few days later.Holding placards showing peace signs and red lines crossing out swastikas, demonstrators said it was time to break a silence that they said had allowed racism and far-right violence to grow in the country. Similar events were held in other towns."People really feel that there's not enough talk about racism here. There's too much neglect. We should all speak more against racism, including the leaders," said a demonstrator who gave her name as Rosa.Prime Minister Juha Sipila, who has been criticized for being cautious on his comments about far-right movements, joined a similar anti-racism rally in the city of Kuopio."People are here for a just cause. Actions by violent extreme movements are a worry to the silent majority of the nation," Sipila told public broadcaster YLE.He said the government was planning to tighten legislation regarding extremist movements and hate speech.The 26-year-old man arrested has been charged for aggravated manslaughter. He is a member of Finland's Resistance Movement, a far-right group that the security intelligence service says aims to create a national socialist state. He has denied being involved in the incident.Last year, police detained people at a demonstration by the group in central Finland saying that some of the demonstrators had assaulted bystanders.In Helsinki, a small group of people on Saturday gathered for a counter demonstration they titled "Close the borders," saying that critics of immigration policy should not be called racists.Police said all demonstrations on Saturday went ahead peacefully.About 32,000 asylum seekers, mostly from Iraq, came to Finland last year. As in other Nordic countries the government has subsequently toughened up its immigration policies, such as by tightening the asylum criteria for people coming from Iraq, Afghanistan and Somalia.