For UCLA, the heart of the issue is the protection of the students’ First Amendment rights to free speech, which the university says it must abide by and as such, allow the conference to go ahead. 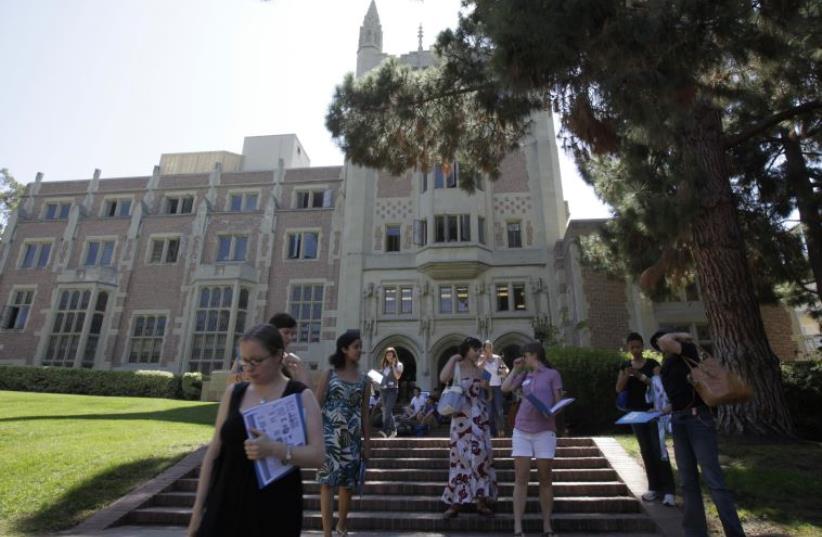 UCLA campus
(photo credit: REUTERS)
Advertisement
LOS ANGELES – A controversial conference hosted by the National Students for Justice in Palestine (NSJP) is set to take place this weekend at the University of California Los Angeles (UCLA).This, despite ongoing lobbying from a slew of Jewish organizations, a California congressman and the Los Angeles City Council to cancel the event, based on arguments that NSJP traffics in antisemitic rhetoric and violence and receives funding from terrorist groups, including Hamas.NSJP announced on August 19 that it would be hosting its eighth annual conference at UCLA, titled “Resistance in the Face of Adversity.” On its conference website, it states that “Zionism is perverse in all aspects of Palestinian life and aims to destroy Palestinian existence and culture,” and “Zionism is not an insurmountable force. We know that Zionism is ethnic cleansing, destruction, mass expulsion, apartheid, and death.”The conference seeks to reframe “Zionism not as some age-old force that’s too great to confront, but as actual laws and institutions that can be broken down and dismantled,” and to focus on Boycott, Divestment and Sanctions (BDS) and to develop “tangible goals and strategies to follow through on successful divestment campaigns.”For students to participate in the conference, they must pre-register and be “verified and vouched for by an SJP (or otherwise named campus Palestine solidarity group) to which you belong or have recently belonged.”On October 11, Democratic California Congressman Brad Sherman sent at letter to UCLA Chancellor Gene Block expressing his concerns over the entire conference.Along with stating that “SJP’s members and leaders have a long history of promoting antisemitic hate speech, which can lead to harassment, bullying and violence,” Sherman also raised concerns about the requirements needed to attend the conference.Title VI of the Civil Rights Act prohibits discrimination on the basis of race, color, or national origin in federally assisted programs and activities.Nonetheless, UCLA decided to move forward with the conference, which was when the Committee for Accuracy in Middle East Reporting in America (CAMERA) started a petition, calling on UCLA to reverse its decision. To date, the petition has received almost 8,000 signatures.At a September 27 UC Boards of Regent meeting, a 20-year-old UCLA third year political science and Middle Eastern studies student and CAMERA Fellow Justin Feldman, called out SJP’s BDS efforts and its claims “that Israel is an apartheid state, and even comparing Israel to Nazi Germany – all of which are officially defined as antisemitism by the United States State Department.”He also cited a May 17 event called “Indigenous People Unite,” hosted by the campus group Students Supporting Israel (SSI). The groups were people from the Jewish, Kurdish and Armenian communities. However, SJP violently disrupted the event by physically and verbally abusing participants. Feldman called on UCLA to either “prevent SJP from hosting this conference at UCLA or alternatively, require SJP to open its conference to all students.”In an op-ed in the Los Angeles Times on November 12, Block openly addressed the quandary, but remained steadfast in ensuring the conference would go ahead as planned, even though UCLA had to send a cease and desist letter to SJP on October 31, demanding the organization remove the unauthorized use of the university’s logo and its icon – the Bruin Bear – from its poster. While SJP did indeed remove UCLA’s logo, the Bruin Bear, pictured playing with a Palestinian incendiary kite, remains.Block said he has “fundamental disagreements with SJP, which has called for boycott against and divestment in Israel, actions that stigmatize that nation and label it a pariah state,” and that the “attempt to ostracize Israeli thinkers, and to declare off-limits even discussion with Israeli academics runs contrary to the values of inclusion, debate and discussion that are crucial to any university.” Nonetheless, he continued, “It remains an awkward reality that our constitutional system, and democracy’s commitment to open debate, demand that Americans allow speech we may oppose and even defend the rights of those who might not defend ours... It also extends to our colleges and universities today.”Roz Rothstein, CEO and co-founder of StandWithUs, the Israel education organization, told The Jerusalem Post, “While the chancellor expressed his opposition to SJP’s political agenda, his op-ed lacked moral clarity. SJP is a hate group with a long record of promoting antisemitism, supporting violence, and violating free speech.”Feldman also told the Post, while he commended Block’s acknowledgment of antisemitism and his “bravery for stating he did not stand by SJP’s hateful rhetoric,” he was nonetheless “disappointed that he lacked a few crucial details” including SJP’s behavior at the May 17 SSI Indigenous People’s Unite event, “and he did not mention the cease and desist letter.”