At least seven Chabad houses and campus centers in the United States, Canada and Australia are raffling off tickets to Israel in order to send representatives to the wedding. 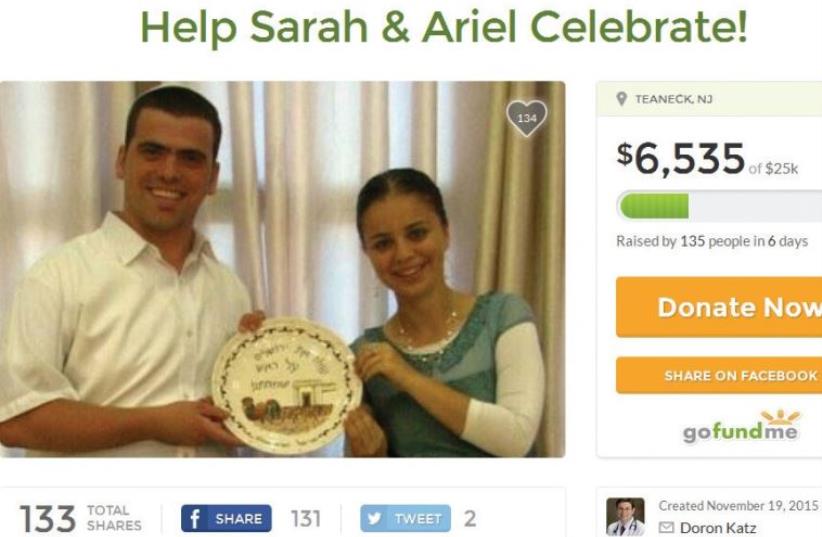 The gofundme page for people to attend the wedding of Sarah Litman and Ariel Beigle
(photo credit: GOFUNDME.COM)
Advertisement
Representatives of Jewish communities around the world will be sending special representatives to celebrate with a young Israeli woman, who had to postpone her wedding after her father and brother were shot to death by a Palestinian terrorist near Hebron two weeks ago.The murders of Rabbi Yaakov Litman, 40, and his 18-year-old son, Netanel, forced Sarah Techiya Litman to push off her wedding to Ariel Beigle for a week in order to sit shiva. Instead of opting for a small wedding, however, Litman announced that she was inviting the public to attend what she is calling a “million person wedding” at Jerusalem’s International Convention Center.“Do not rejoice over me, my enemy, for I have fallen but I have gotten up,” the couple quoted from the Prophet Micah in their public invitation.At least seven Chabad houses and campus centers in the United States, Canada and Australia are raffling off tickets to Israel in order to send representatives to the wedding.“This initiative presents our community with a tangible and meaningful way to express our solidarity, love and support with the people of Israel,” Rabbi Aaron Slonim, the Chabad emissary at Binghamton University told chabad.org.“Beyond that, we join in the deep resolve of this couple that terror not define our lives, and that goodness and kindness and joy fight the wave of darkness and despair that seems so overwhelming.”“In just two days, over 150 people entered the raffle, and many others just chose to donate,” said Rabbi Dovid Gutnik of Chabad in East Melbourne said.“Despite the current and historical challenges and tragedies, we are an unbreakable family. And when we are united, we will prevail and we will thrive. That is the lesson of history, and that is what we are doing now.”According to Rabbi Mark Fishman of Congregation Beth Tikvah of Dollard des Ormeaux, Quebec, after announcing his intention to fly in for the wedding, several congregants decided to join him as well and that in the end a 12-person delegation would attend.“I spoke in synagogue this last Shabbat and told those attending that I would be flying out to Israel to dance at this wedding and be a part of the epic saga that is Jewish destiny. Since that time we as a community have been blessed by individuals who have stepped up and wish to join. We are truly fortunate to have such leadership,” Fishman wrote in an email to congregants, adding that he will be giving the couple a gift from the congregation’s Torah Fund.“We read this and we knew – one of us had to attend this wedding,” Fishman’s wife Sarah explained.“Why? Because those of us living outside of Israel do not bear the tremendous task of protecting our homeland.That responsibility is entrusted to those 18-yearold men and women who serve in the IDF. Because we, who live outside of Israel, do not bear the weight on our shoulders on a daily basis of what route to take as we drive our kids to school, what supermarket to shop at today, and far too often lately, what funeral to attend.That weight is carried on the shoulders of Israelis. So why go to the wedding? Because OUR role in the history of the Jewish people is to ensure that those who DO live in our homeland truly know that we support them, that we appreciate all they do so that we too can have the ‘zchut’ [merit] of calling Israel ‘OUR’ homeland from so far away.”Aside from sending people, Diaspora Jews have also taken to the Internet to crowd-fund for the couple.On Tuesday OnlySimchas.com, an orthodox web platform used for announcing weddings, engagements and other life-cycle events, announced that it had started a GoFundMe campaign to give them “a beautiful wedding gift from Jews across the world who are unable to be at the wedding but are definitely with them in their hearts.”