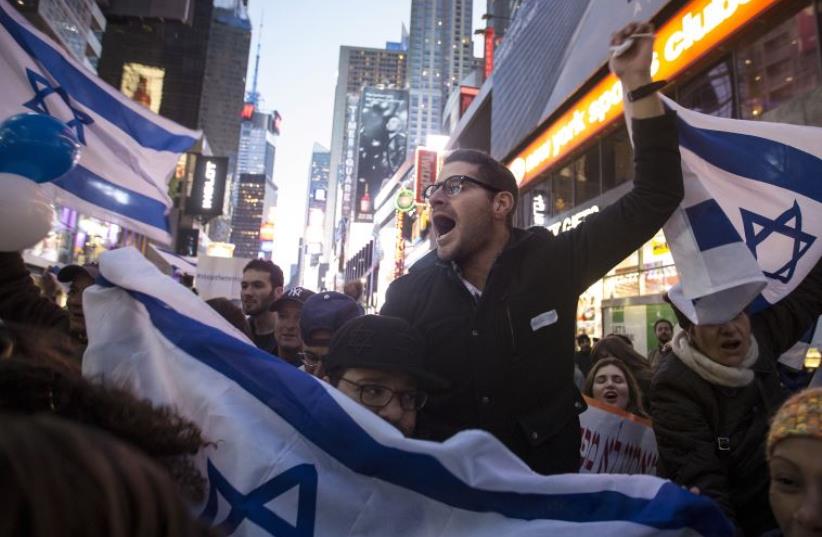 Hundreds rally in New York to support Israel
(photo credit: REUTERS)
Advertisement
The leader of American Reform Jewry said Diaspora Jews should not support the misguided policies of Israeli leaders and that Israel should look to North America for moral guidance.“Asking Jews around the world only to wave the flag of Israel and to support even the most misguided policies of its leaders drives a wedge between the Jewish soul and the Jewish state. It is beyond counterproductive,” Rabbi Rick Jacobs, president of the Union for Reform Judaism, said in his keynote speech Thursday night to the union’s biennial conference in Orlando.“Jews who see brokenness in the treatment of Israel’s minorities, or in the way ultra-Orthodox views of Judaism are being enshrined in secular law, are being told that, when it comes to Israel, you should check your commitment to tikkun olam at the door; we will not,”  Jacobs said.Tikkun olam, the Hebrew term that means repairing the world, traditionally has meant doing good works that benefit the wider community. Jacobs said it also applies to repairing Israel.“Our North American Reform Jewish community can be an enormous source of spiritual, moral, and strategic help to the Jewish state,” he said.“The current Israeli government is unlikely to permit advances in religious freedom such as civil marriage, equal funding of non-Orthodox institutions and reducing the power of the ultra-Orthodox Chief Rabbinate,” Jacobs noted. “Our movement, with its alternative to the rigid and insular Judaism that permeates Israeli public life and its unbounded passion for tikkun olam as a living expression of Jewish life, must remind the Israeli state about the power and wisdom of a pluralistic approach to Jewish life.”Much of Jacobs’ speech was about refocusing the Reform movement on using tikkun olam as a gateway to Jewish life, and using Jewish ritual and study to reinforce the work of tikkun olam.“For too many non-Orthodox Jews, tikkun olam is not grounded in deep study, spiritual practice or communal engagement,” Jacobs said.“Just as we cannot build and sustain our Jewish communities solely on ritual and study, neither can we build and sustain our Jewish identity solely on being good citizens of the world,” he said. “Prayer, Shabbat, and festival observance help replenish the reserves of idealism.”Jacobs added, “Today, we Reform Jews are no longer allergic to everything in traditional Judaism. We can and should reinterpret what prayer, kashrut, and Shabbat are, how Jewish study and practice can be the underpinning to a life of tikkun olam. They can give us the balance and strength to labor daily to do justice in our time.”The Reform leader also criticized religious Jews for being scrupulous about certain Torah observances but ignoring the imperatives of social justice.“Too often, traditional Judaism has ignored tikkun olam. Too often, yeshiva study and rigorous observance of ritual mitzvot do not lead to the prophet’s call to ‘establish justice in the gate,’” Jacobs said, quoting the Book of Amos.“Israel’s ultra-Orthodox chief rabbis are zealous about making sure no chametz” — leavened bread – “is found in restaurants or stores on Pesach, and they are scrupulous about the Shabbat restrictions in Israeli hotels, but you will rarely hear them speak out about their government’s inadequate housing policies, or the staggering gap between rich and poor, or the despair of Arab citizens of Israel,” he said.Jacobs, a former dancer, had ballet dancers performing alongside him onstage during one portion of his hour long speech. Some 5,000 people are at the Reform biennial, which began Wednesday and runs through Sunday. Vice President Joe Biden will address the gathering on Saturday night.