Baroness Jenny Tonge is no stranger to accusations of antisemitism.

The Union Flag flies near the Houses of Parliament in London, Britain, June 7, 2017.
(photo credit: REUTERS)
Advertisement
British politician Baroness Jenny Tonge, no stranger to controversy and accusations of antisemitism, has caused a further uproar after sharing a Facebook post that depicts a clearly antisemitic image and refers to the "Jewish lobby".Tonge, a vocal critic of Israel, shared a Facebook post on Saturday featuring a quote attributed to musician and BDS proponent Roger Waters about the "AIPAC Jewish lobby in the USA" that included an antisemitic caricature of a large-nosed Jewish man clasping his hands together. The original post, written by Saeed Sarwar, seemed to preemptively dismiss any concerns that the post could be considered antisemitic. "I've checked with 4 specialist friends incase [sic] anyone tries to suggest this is antisemitism. It's actually bang on," wrote Sarwar. 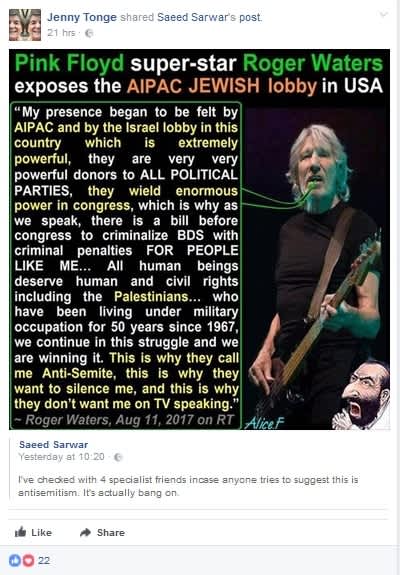 A Facebook post shared by Baroness Jenny Tonge, August 26, 2017 (Facebook)
Tonge has since deleted the post from her Facebook page but a tweet posted by pro-Palestinian activist Gary Spedding shows that the former Liberal Democrats peer is not ready to apologize for any offense caused."I will delete that one because I did not notice bottom right hand corner which could be an Arab looking horrified?" wrote Tonge in an email to Spedding.

Jenny Tonge has written a response to my letter to her... it's a typical non-apology. Even has audacity to tell me to examine my conscience pic.twitter.com/VL9P7awnIa

In response, Spedding tweeted: "Please stop damaging the legitimate Palestinian cause by associating it with this antisemitic filth. You're harming Palestinians & Jews."Tonge, nicknamed by some critics as "Jihad Jenny," has a long history of antisemitism accusations and scandals. Following a 2003 trip to the Gaza Strip, Tonge drew comparisons between the plight of Palestinians in Gaza to suffering of Jews in the Warsaw Ghetto."You are almost getting a situation like the Warsaw ghetto. People can't get in or out. They can't work, they can't sell anything. There is this gradual squeeze," said Tonge. The statement drew criticism from Yad Vashem museum chair Avner Shalev. 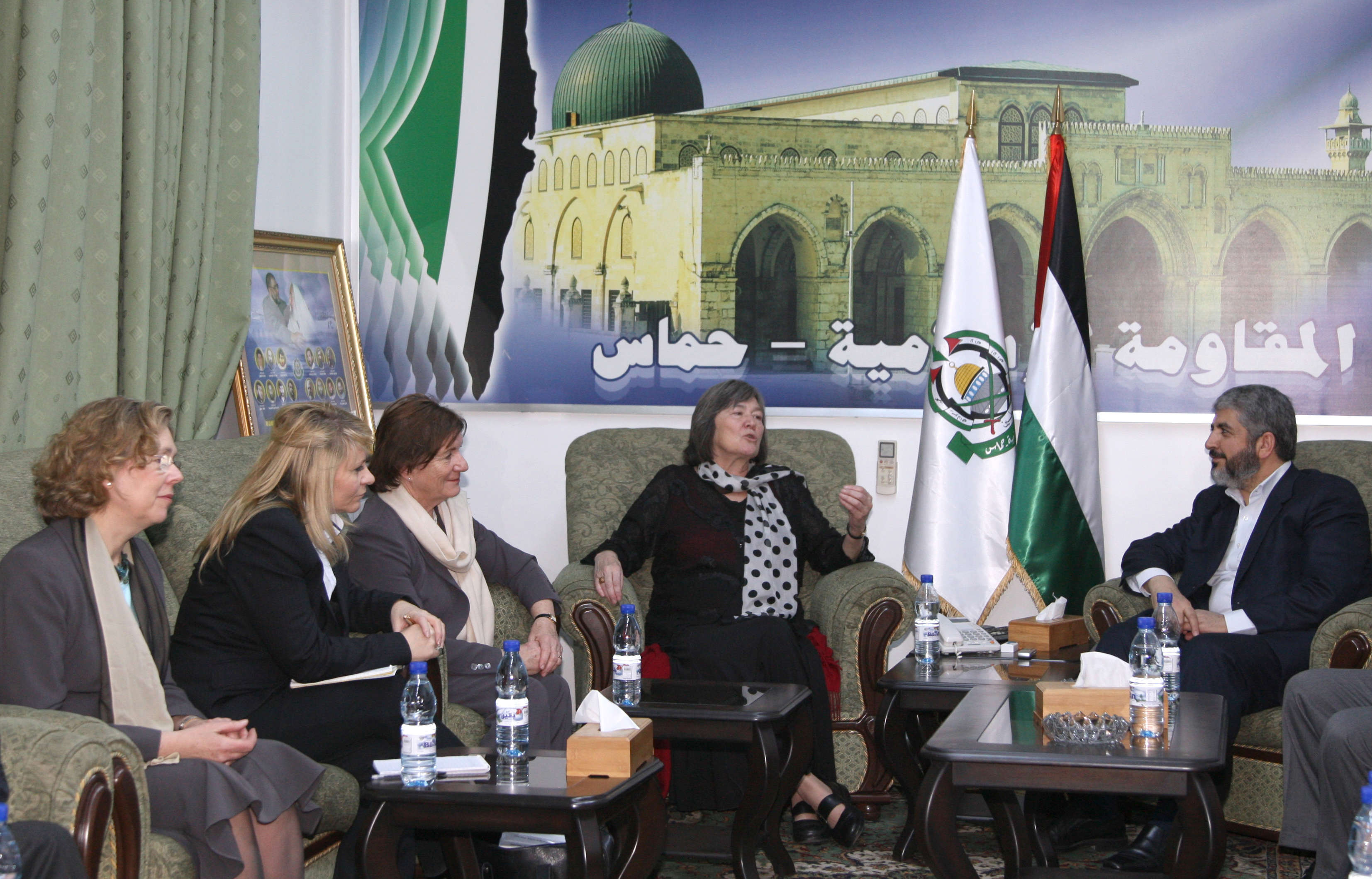 Hamas leader Khaled Meshaal (R) meets British members of parliament including British Baroness Jenny Tonge (3rd L) in Damascus March 14, 2009. (Reuters)
Tonge caused outrage in January 2004 when she suggested, during the Second Intifada, at a parliamentary meeting that she might consider becoming a suicide bomber if she were Palestinian. "If I had to live in that situation – and I say that advisedly – I might just consider becoming one myself," said Tonge. Tonge was subsequently removed from her position as children's spokesperson for the party by then-leader Charles Kennedy, describing her remarks as "completely unacceptable."Tonge retired from the House of Commons ahead of the 2005 UK General Election and became a life peer, granting the controversial politician a seat in the House of Lords. 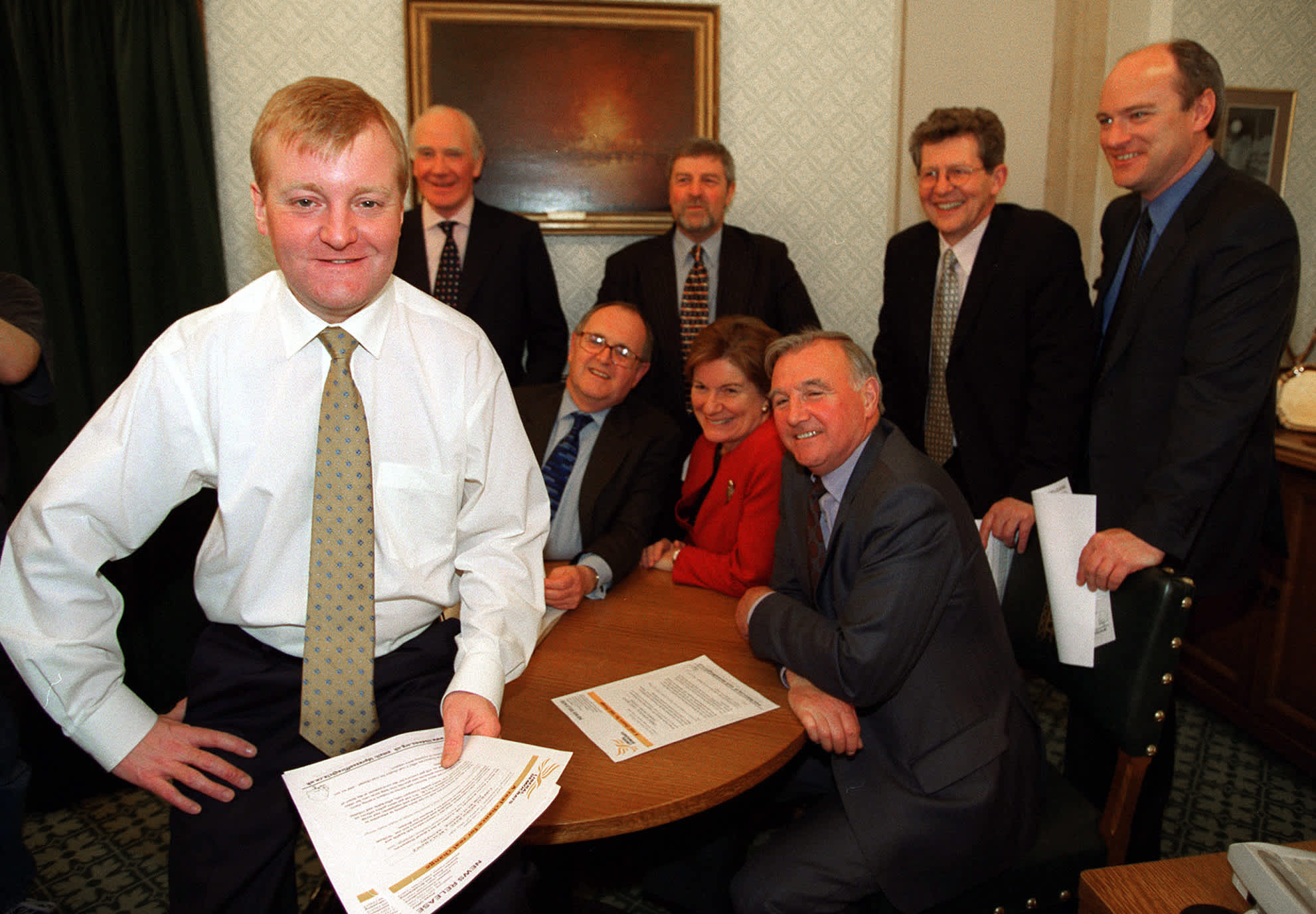 Leader of the British Liberal Democrats Charles Kennedy (L) poses with members of his electoral team including Baroness Jenny Tonge in his office inside the Houses of Parliament May 8, 2001. (Reuters)
In February 2010, Tonge was removed from her position as health spokeswoman by then-Liberal Democrat leader Nick Clegg after calling for the IDF to investigate allegations of organ "harvesting" by medical teams giving humanitarian assistance to victims of an earthquake in Haiti. In 2012, Tonge once again caused uproar when, appearing at an Israel Apartheid Week event at Middlesex University, she said: "Beware Israel. Israel is not going to be there for ever in its present form... Israel will lose support and then they will reap what they have sown."Given an ultimatum to apologize or resign for her remarks, Tonge resigned the party whip and continued to sit in the House of Lords as an independent Liberal Democrat.Tonge quit the Liberal Democrats in 2016 after being suspended from the party over further allegations of antisemitism. During an event hosted by Tonge, an attendee compared Israel to the Islamic State and Jews were blamed for the Holocaust. The remarks went unchallenged. British volunteer-led charity Campaign Against Antisemitism described Tonge's ongoing membership of the House of Lords as a "stain" on the institution.