“It’s an act of bringing joy to children who have been affected directly and indirectly by terror attacks." 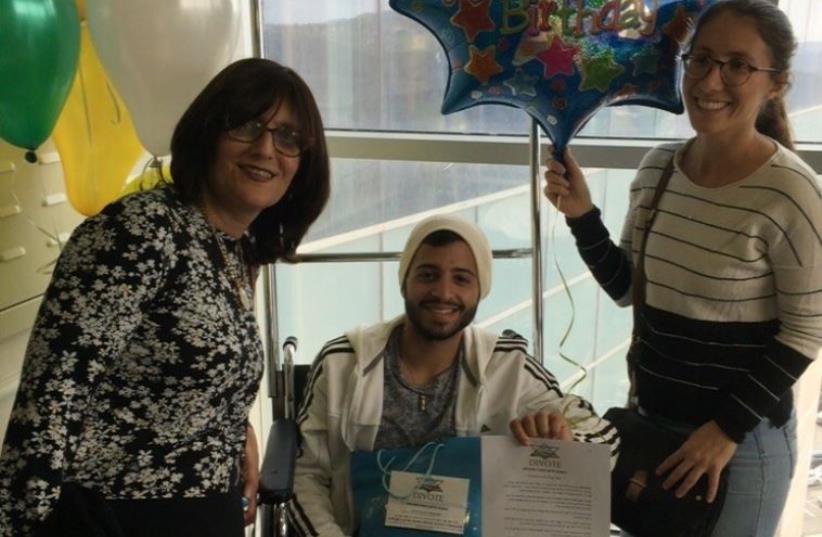 DIVOTE volunteers delivering DIVOTE packages of love and support to a young man who was recently stabbed
(photo credit: Courtesy)
Advertisement
DURBAN – Responding to recent wave of knifing attacks gripping Israel, the South African Jewish community, spearheaded by the charity organization Divote, has sent care packages to the victims through a group representing the community that has just visited various hospitals across the country.Founded by Durban-based philanthropist John Moshal, Divote has given South Africans a unique opportunity to help Israeli victims of terror for the last 14 years.“John stood up at a solidarity meeting in Durban, South Africa, after the names of those killed at the start of the second intifada were read out,” said Divote South Africa coordinator, Cheryl Unterslak. “He stated that nothing could be done for those that had passed away but something could be done for those that were injured, orphaned and affected by acts of terrorism. John and his family pay for all the running costs of Divote and they also provide kaytanot and hugim to some of the children that have been recently affected by terrorism,” she added.Divote, Unterslak explained, is a charity-based project that does not ask for money.“It’s an act of bringing joy to children who have been affected directly and indirectly by terror attacks in Israel,” she said. “The South African community are incredible. They are always so keen to help us and take part.”Unterslak and her team go around South Africa to different communities, schools and organizations, big and small, where families have the opportunity to participate in a number of projects.“We have a project where we partner South African and Israeli children affected by terrorist attacks who are both at bar mitzva and bat mitzva age,” she said. “The South African children write a letter and send a bar mitzva or bat mitzva gift to their Israeli partner.”Her biggest wish, she said, is to see Divote became an international initiative.“It would be amazing to have other people from other countries take part and join us... I hope this will happen soon and it’s something we need help with.“I’m extremely proud that this project is South African- born,” she said. “This is a way for us, as South African Jews, to help and it’s also a way of showing that we care about the difficult situation in Israel.”