Deputy Prime Minister Lodewijk Asscher, who has Jewish ancestors, wrote this in a post on Facebook on Tuesday titled “Disrespectful Dog.” 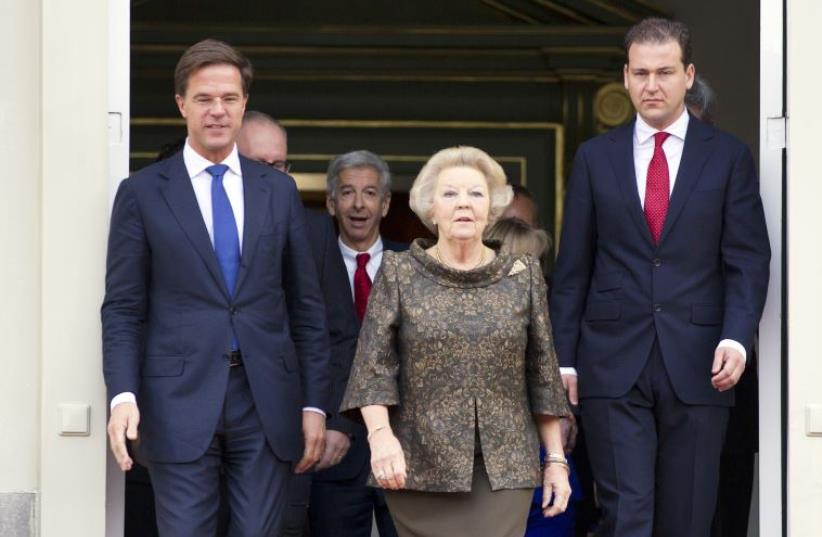 Queen Beatrix of the Netherlands (C), Prime Minister Mark Rutte (L) and Deputy Prime Minister Lodewijk Asscher.
(photo credit: MICHAEL KOOREN / REUTERS)
Advertisement
AMSTERDAM — The deputy prime minister of the Netherlands said that he had stopped interacting on social media because of anti-Semitic abuse against him.Deputy Prime Minister Lodewijk Asscher, who has Jewish ancestors, wrote this in a post on Facebook on Tuesday titled “Disrespectful Dog.”In it, he lists the handles of several Twitter users who used anti-Semitic language against him.One such user wrote: “Asscher would rather crawl into a Muslim burrow than stand with his own nation! Just like his grandfather, who was happy to work for the occupier.”Asscher, a politician for the left-leaning Labor party, wrote that this reference is actually to his great grandfather, Abraham Asscher, who was a member of the Jewish Council set up by the Nazis to control Dutch Jews ahead of their extermination in death camps. He sarcastically congratulated those who traced back his lineage for their “great interest in history.”Another user wrote: “The Zionist dog Asscher skips U.N. meeting on racism, not anti-Semitism. The former doesn’t interest him.”For many users, Asscher wrote, “my Jewish last name is a plausible explanation for my behavior and attitude,” such as simultaneously giving Muslims too much and too little” attention.Due to this discourse, he added, “I often no longer react to people who approach me on social media.” In conclusion, he asked social media users to show the posts they intend to publish about him to their mothers or daughters before posting.“If they also think it’s a good idea, go ahead and post,” he wrote.