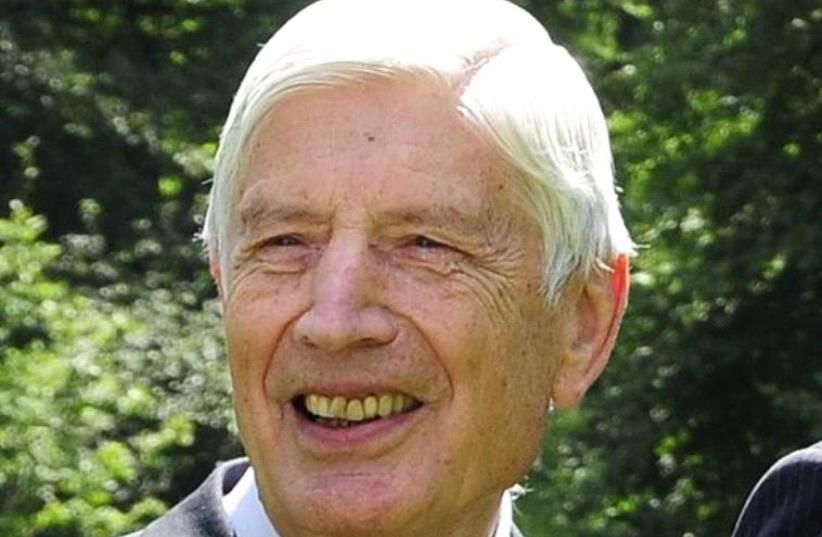 Dries van Agt
(photo credit: MINISTER-PRESIDENT RUTTE/WIKIMEDIA COMMONS)
Advertisement
AMSTERDAM — A leader of Dutch Jews criticized a former prime minister of the Netherlands for using a word that is widely associated with the Holocaust to describe arrests by Israel of Palestinians.Dries van Agt, a pro-Palestinian activist who in 2012 said Jews should have “gotten a piece of land in Germany” instead of Israel because “World War II had nothing to do with the Middle East,” used the word “razzia” on Twitter to describe the arrests of terror suspects last week.No one died in the arrests.Originating in Arabic, the word means invasion or raid. But according to Ronnie Eisenmann, a former leader of the Jewish Community of Amsterdam and current chairman of the pro-Israel Center for Information and Documentation on Israel, “it is mostly used in the Nazi context” in Dutch.According to the ENSIE Dutch-language encyclopedia, “the word ‘razzia’ in the Netherlands is mostly used in connection with the time of the German occupation.”Eisenmann called Van Agt’s use of the term “unacceptable and inappropriate,” adding that Dutch Jews “are used to this by now from Van Agt.”Bart Vink, a representative of the left-leaning D66 party, which is relatively critical of Israel, also condemned Van Agt’s use of the word. “Your language, bias, and one-sidedness are objectionable,” Vink wrote to Van Agt on Twitter. “Again you are harming the Palestinian cause once more. Pity, they too deserve better.”Van Agt served as prime minister in the early 1980s. In 2008, he spoke at a rally in Rotterdam in which Hamas Prime Minister Ismail Haniyeh delivered a speech on video via satellite.Van Agt has said that he would accept the definition of Hamas as a terrorist organization only if the same definition applied to Israel. He also has called for Israeli Prime Minister Benjamin Netanyahu’s arrest and trial for alleged war crimes.Van Agt has faced accusations of anti-Semitism since the 1970s and has consistently denied them.In 1972, while serving as justice minister, Van Agt said: “I am only an Aryan,” in speaking to a journalist about his intention to bring about the release from prison of Nazi prisoners for health reasons.After the statement’s publication caused a scandal, Van Agt said that he meant to say that the release would be difficult for him to achieve because his Jewish predecessor had, according to Van Agt, tried and failed.The International Holocaust Remembrance Alliance, which is an intergovernmental body of 31 countries including the Netherlands, last year adopted a definition of anti-Semitism which includes drawing comparisons of contemporary Israeli policy to those of the Nazis. Critics of this definition allege it is inaccurate and potentially limiting of free speech on the topic of Israel.