There has been growing tension between the Netherlands and Turkey over Dutch refusal to allow Turkey's family minister to campaign in their country. 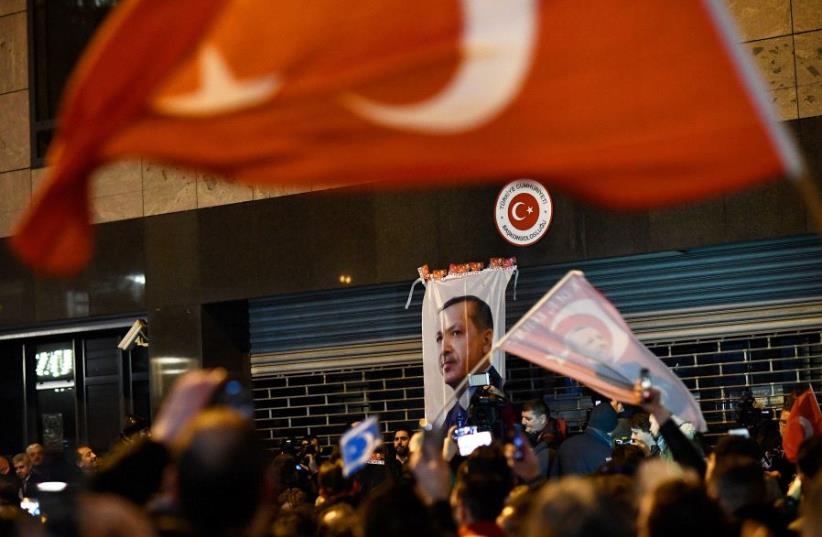 Demonstrators gather ahead of clashes with riot police outside the Turkish consulate in Rotterdam, Netherlands
(photo credit: REUTERS)
Advertisement
ROTTERDAM, The Netherlands — Dutch Muslims shouted antisemitic slogans amid violent clashes with police in Rotterdam over authorities’ refusal to allow a Turkish Cabinet minister to campaign in Holland for a Turkey referendum vote.Dozens of protesters gathered Saturday night in front of the Turkish consulate in the Dutch city to listen to Family Minister Fatma Betul Sayan Kaya. Upon receiving a false rumor that she had been arrested, the crowd began roaring “cancer Jews” and “cancer Wilders” shortly before the outbreak of violence that led to the injury of five people, including one policeman, the Algemeen Dagblan reported.Geert Wilders is an anti-Islam politician who, according to polls, is in a tight race with Prime Minister Mark Rutte ahead of Wednesday’s general elections in the country. Wilders has campaigned against allowing Turkish ministers to campaign in the Netherlands. Rutte instructed police to prevent the ministers from addressing crowds in the Netherlands in a move that some criticized as illegal but others praised as a justified bid to prevent external intervention by Turkey in Dutch affairs.
Dutch riot police break up demonstration in Rotterdom in support of Turkish president Erdogan (Reuters)
Kaya came to the Netherlands to campaign among Turks living in Europe to vote yes on a referendum next month that would greatly expand the powers of the country’s authoritarian president, Recep Tayyip Erdogan.Last week, Kaya accused both Germany, which also opposed Turkish campaigning on its territory, and the Netherlands of “Nazi behavior” for blocking Cabinet ministers and other officials from advocating the advantages of a yes vote in the referendum.Zaken Mevlüt Çavusoglu, another Turkish Cabinet minister, also was prevented from campaigning in Holland, where Wilders often criticizes the center-right government of Rutte of being too soft on radical Islam.The Turkish government threatened to impose economic sanctions on the Netherlands and ban Dutch planes from landing in Istanbul. The Dutch Embassy in Istanbul was closed briefly over the weekend weekend and thousands of protesters surrounded it while chanting anti-Dutch and pro-Erdogan slogans. The embassy was reopened Monday. The tensions were among the worst ever in Dutch-Turkish relations.According to Rotterdam Mayor Ahmed Aboutaleb, the Turkish consulate said he would work to de-escalate the situation but in fact had “lied and called on protesters to gather outside” the consulate. He also accused Kaya of using several convoys en route to the Netherlands from Germany to throw off police. Aboutaleb, who opposes the Turkish campaign drive in Holland, said the Turkish government’s conduct was “scandalous.”Likoed Nederland, an organization supportive of Israel’s Likud party, accused Aboutaleb of hypocrisy in light of his refusal to ban a conference organized by a group with ties to Hamas next month. Aboutaleb told the Center for Information and Documentation that the Dutch counterterrorism authority allowed the gathering, but the same authority told CIDI that it had never told this to Aboutaleb.CIDI also wrote that the German security service, BfV, has called the PRC group that organizes Palestinians in Europe conferences “a front for Hamas.”“Surely a terrorist group is not more deserving of a podium in Rotterdam than a Turkish minister,” Likoed Nederland wrote Sunday.